Australia more than a degree above average in January

It may not have felt like a typical searing hot midsummer in some of the soggier parts of Australia, but despite persistent rain across many areas, January 2022 was significantly warmer than average across the entire country.

Each individual state and territory was warmer than normal in terms of both average minimums and maximums, while the nation as a whole was also warmer than usual by day and by night.

Below are some *relevant statistics:

Image: It was warmer than normal across a large portion of the country in January, including the whole of Tasmania. Source: BoM.

You can read our stories about the extraordinary northwest WA heatwave here.

The coldest night was -1.7°C at Perisher Valley in NSW (its lowest Jan minimum on record is -5°C)

You can read our story about that and the flooding in nearby Maryborough here. 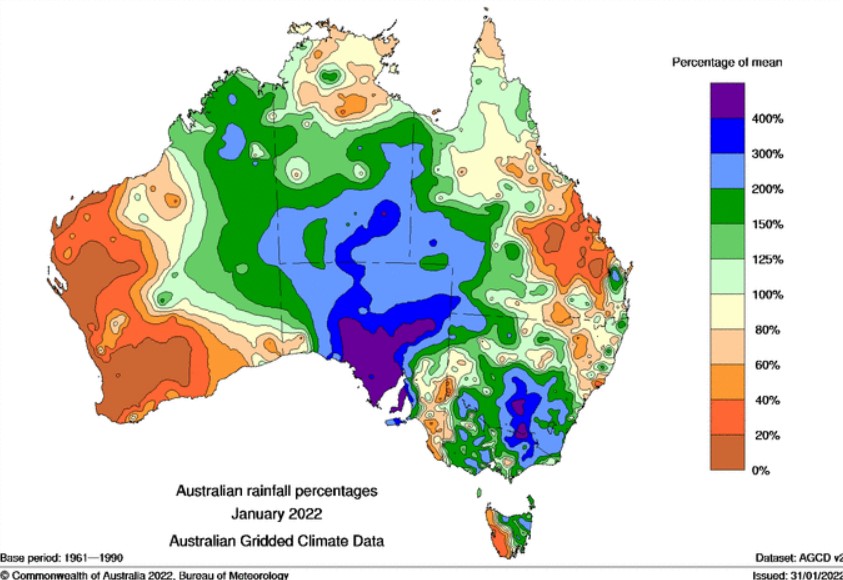 Image: It was wetter than normal across a large portion of the country in January. Source: BoM.

*Bear in mind that all of the above temperature statistics are averaged out from 112 weather stations nationwide. Please also note that when we mention January temperatures in relation to "average", we are referring to the period from 1961-1990. This is known as the "global baseline period", as recommended by the World Meteorological Agency.