Zero Shadow Day arrives in Townsville, a fun phenomenon for those that chase the sun 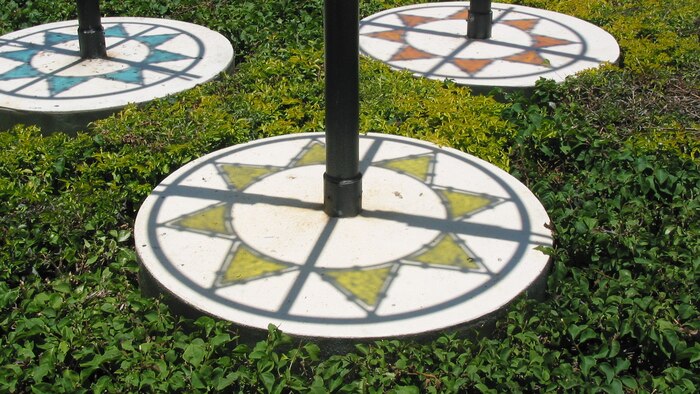 Source: ABC
Shadows have disappeared for a fleeting moment across a band of North Queensland today due to a solar phenomenon that only happens across a specific area each side of the equator. In what the Hawaiians call Lahaina Noon, shadows disappear twice a year, at a different time of year in each location, when the sun is exactly perpendicular to the earth. "It's at the local noon, when the sun is directly overhead," the Bureau of Meteorology's Shane Kennedy said. "If you stuck a stick in the ground it'd give no shadow. "It should be everywhere at that same latitude for that day." Zero Shadow Day occurs twice a year within the tropics of Cancer and Capricorn, between 23.5 degrees either side of the equator. "You get it when the sun is moving further into the southern hemisphere this time of year," Mr Kennedy said. "On its way back up to the equator we'll get another one." The weather bureau forecasts the next sub-solar point in Townsville, and along the same latitude, will be at midday on January 24, 2022. 'Thank you sun, thank you earth!' Dr Anneke Silver has created art in Townsville that is only complete at midday on Zero Shadow Day. "It's a set of three shapes, but it's also a horizontal circle" the Townsville artist said. "On no shadow day the pattern that's in the circle ? that's like a big star ? is projected on the pedestal. "It's coloured light through glass so you see a coloured star on the pedestal. "Any other time you only see a bit of it." She was inspired by the unique seasons of Queensland's tropics. "I'm always very worried when people say the seasons here aren't proper," she said. "I think, well, the seasons are always proper. "It's only when you have the wrong model for the seasons, basically a northern European model, that you can say the seasons aren't proper. "So a lot of my work has been about making people aware of what really happens here in the seasonal changes. "In the tropics, the seasons are very different and I think when you're aware of it, there's such an amazing beauty in it." The pedestals, installed by Dr Silver and a technician in the 1990s, stand 2.5 metres high in Thuringowa's Dan Gleeson Park. "Then came [the first] no shadow day and I was really worried ? what if it isn't working?" Dr Silver said. "But then I thought 'you can't tweak it, you can't give the earth a shove to make it work'. "But thank you sun, thank you earth, it works." The sculpture has drawn a crowd every Zero Shadow Day since then. "There's a number of people I know who said they go every year and have a little picnic when it happens," Dr Silver said. Another Zero Shadow Day artwork hangs in an awning above a crossing on a main street in Ayr, about an hour south of Townsville.