What's in store for Australia this summer? 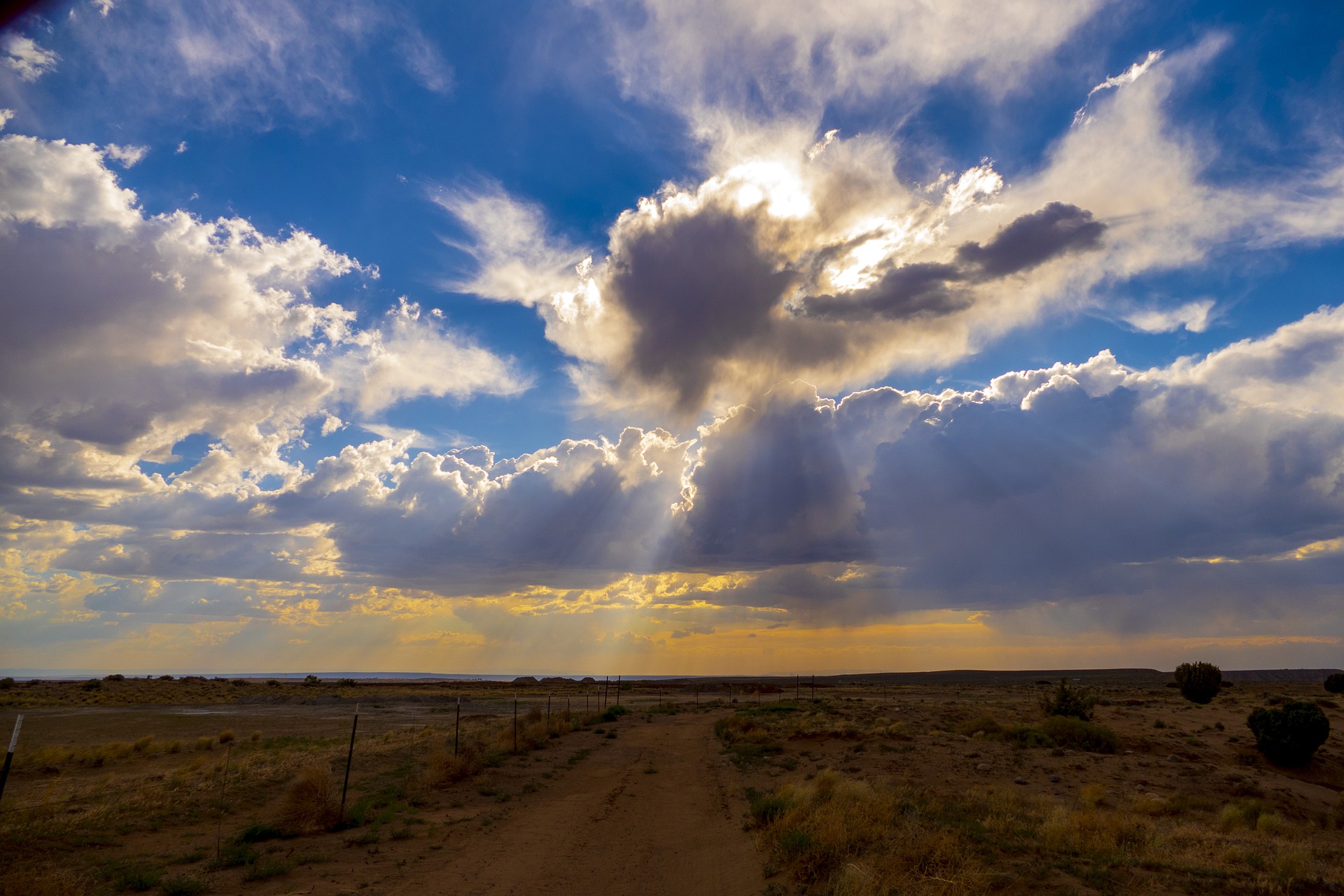 Summer has arrived in Australia after the country's wettest November on record and the coolest November in 21 years. So, what's in store for the next three months?

A wet end to spring

The country as a whole just registered its wettest November on record, rounding out Australia's wettest spring in 11 years. The maps below show Australia's rainfall deciles for November and spring as a whole. The dark blue shading shows where rainfall was the highest on record. 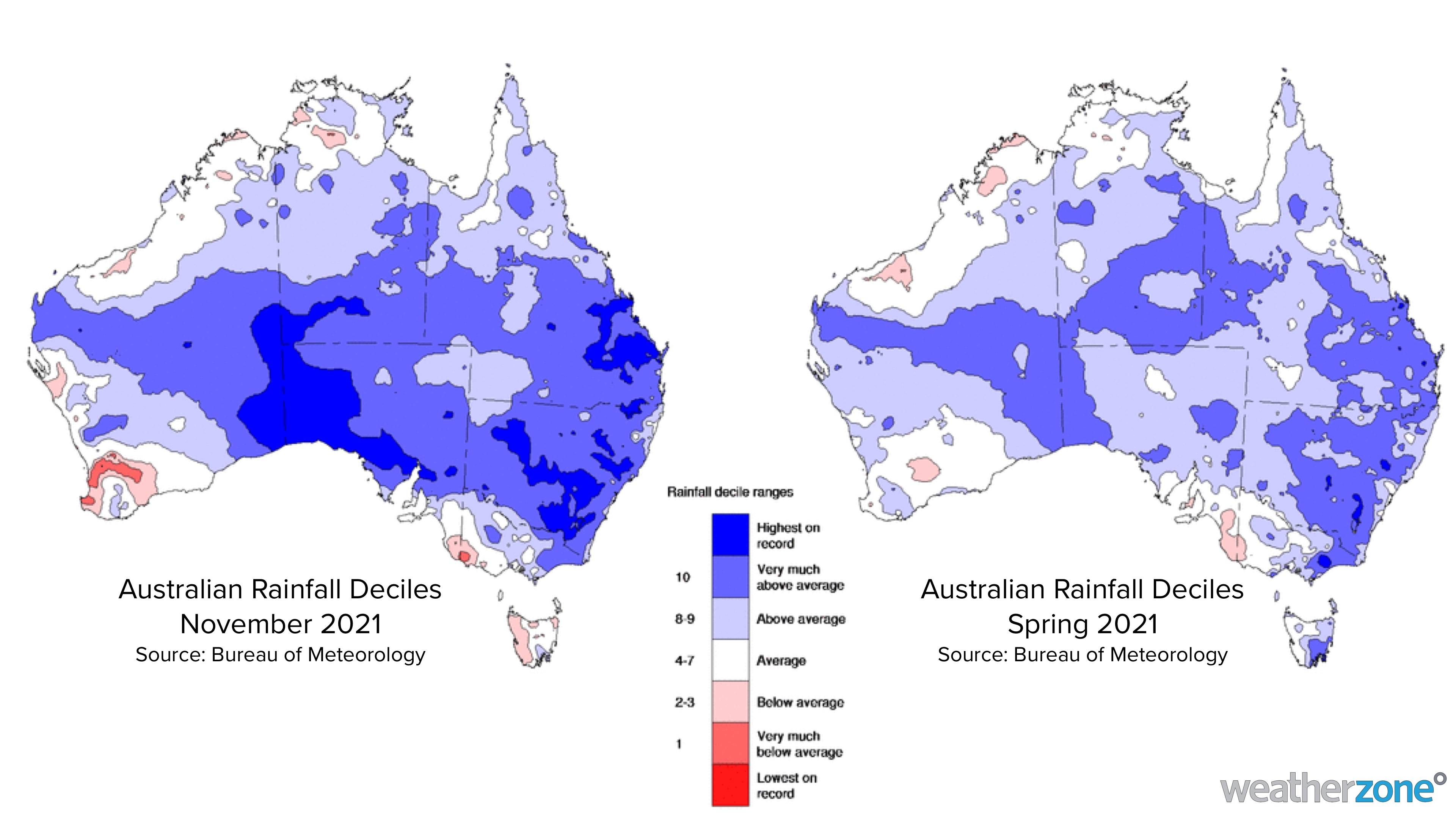 The increased cloud cover in the last few months and November's prolific rainfall helped Australia register its wettest spring in 11 years and coolest spring since 2016.

La Niña is expected to last until at least February 2022, with most models suggesting that it will remain at weak to moderate strength. This will have a significant influence on Australia's weather this summer.

What does La Niña mean for our summer forecast?

La Niña increases the likelihood of rainfall in large areas of Australia. It also promotes cooler-than-average days and warm nights, along with an increased risk of flooding. However, it is important to note that no two La Niña events have exactly the same impacts.

Widespread rain, thunderstorms and flooding are an increased risk this summer, particularly for eastern Australia. This is due to La Niña and above-average sea surface temperatures near northern and eastern Australia. Many areas of Australia have entered spring with abnormally high amounts of soil moisture following a wet spring. This wet landscape will increase the likelihood of riverine flooding in the coming months, especially in areas that receive above-average rain this summer. Elevated levels of moisture in the atmosphere will also increase the risk of flash flooding from thunderstorms during the next three months.

The warm oceans around Australia are conducive to high humidity and above average rainfall across northern Australia this summer, particularly for the NT and QLD. La Niña also increases the likelihood of above-average wet season rain in northern Australia.

An early monsoon onset is also forecast for northern Australia in the 2021-22 wet season. During La Niña, the monsoon onset at Darwin typically occurs in mid-December, which is earlier than the usual arrival in late-December.

During La Niña years, there is a reduced risk of extremely hot days across most of eastern and southern Australia. However, prolonged warm spells, with less intense heat, are more likely in southern parts of the country.

It's also worth noting that tropical cyclones forming off the northwest shelf of Australia have been linked to heatwaves across southeastern Australia.

We have already seen an early start to Australia 2021/22 tropical cyclone season, with Cyclone Paddy forming near Christmas Island in mid-November. This is several weeks earlier than usual for the first cyclone of the season, which was anticipated due to the influence of La Niña.

Another tropical cyclone, Teratai, briefly formed to the west of Christmas Island on the first day of December. This system was just outside Australia's area of responsibility.

This early-season tropical cyclone activity is likely to be the start of an above-average cyclone season for Australia, due to warmer-than-average sea surface temperatures in the tropics and La Niña.

The season officially runs from November until April, during which time we usually see 9 to 11 tropical cyclones in the Australian region. On average, around four cyclones make landfall, with the first coastal crossing occurring around mid-to-late December during La Niña years.

Most of Australia is expecting a normal amount of fire activity this summer. However, there are areas of below normal fire potential in the ACT, NSW and Victoria (blue on the map below) due to increased rainfall and reduced fuel loads following the 2019-20 fires. 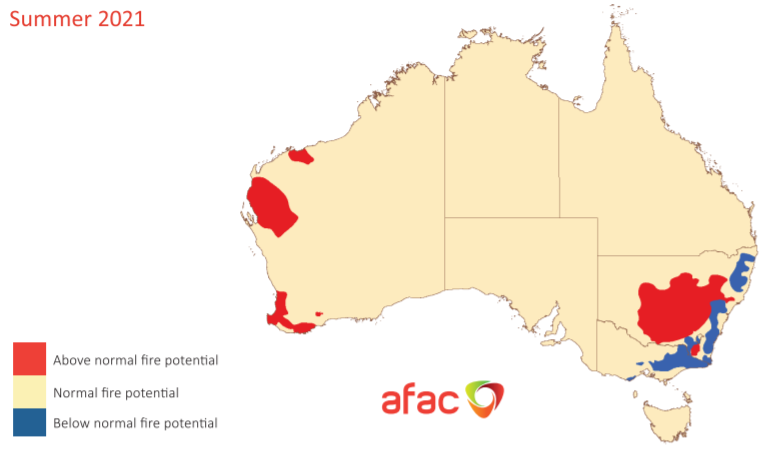 While much of Australia is expecting normal to below-normal fire potential this summer, western NSW has an increased risk of grass and crop fires during the coming months. This region has seen prolific grass growth in recent months after the state's wettest November on record. Once this grass dries out, it will produce high fuel loads for fires.

Dry conditions in Western Australia (WA) may also lead to above average bushfire conditions during the warm summer months ahead.