Unsettled weather is on its way 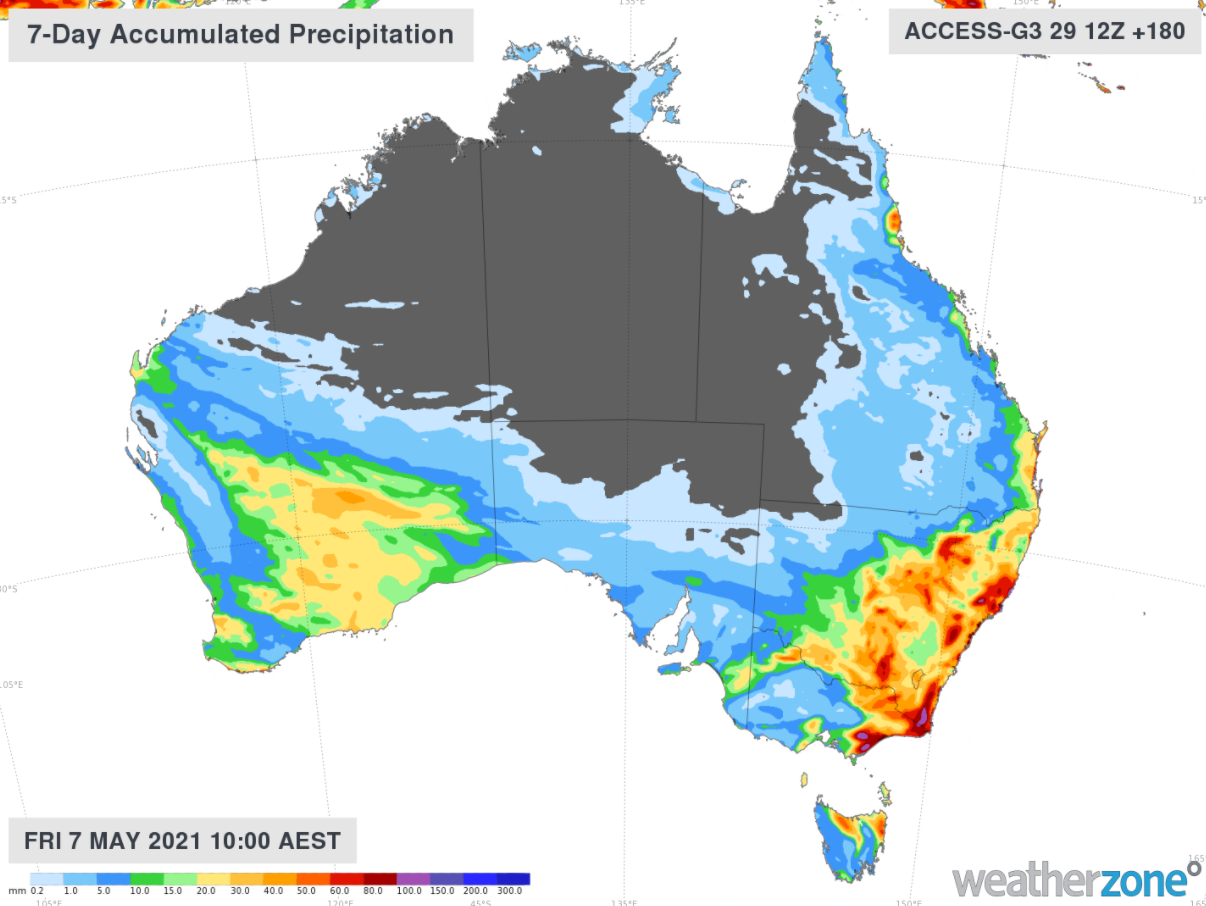 After a relatively benign April, unsettled weather is on its way for the opening week of May.

Rain is expected to increase from next week for NSW and eastern Victoria, thanks to surface and upper-level low-pressure systems.

During the next week pockets of 80-100mm of rainfall along the South Coast of NSW are forecast by both the Australian (ACCESS-G3) and European (ECMWF) models (figures 1 and 2).

The computer models are having a hard time at discerning exactly where most of the rainfall will fall, due to some uncertainty in the position of a surface low.

The European model has the heaviest totals confined to the far southeastern coastline, while the Australian model has pockets of 80-100 mm extending right through to the Mid North Coast (figure 2). Figure 1: European model (ECMWF) accumulated weekly rainfall up to Friday 7 May at 10am AEST. Figure 2: Australian model (ACCESS-G) accumulated weekly rainfall up to Friday 7 May at 10am AEST

A cut-off low pressure system (low) in the upper levels of the atmosphere is signaled to move over NSW by Wednesday next week, 5 May. There is general model agreement in the position of the upper low next Wednesday morning, 5 May (figure 3). Figure 3: 500 hPa temperature, wind and height from the ECMWF, GFS and ACCESS-G models, showing a distinct cut-off low over NSW on next Wednesday, 10am 5 May.

The upper low is forecast to help a low-pressure system at the surface to develop, which may enhance the rainfall further particularly on the southern flank of the surface low.

The position of the surface low is uncertain at this stage, with varying rainfall totals seen throughout the models consequently (figures 1 and 2).

Upper low-pressure systems have been known to generate dangerous weather conditions at the surface, such as gale force winds, heavy rainfall, large surf and severe storms.

At this stage, heavy rainfall along the south coast of NSW and eastern VIC is expected to be the main outcome of the two systems. This is because the low-pressure system at the surface is signaled to be relatively weak and is not forecast to hang around the east coast for too long.

Our meteorologists will be watching the models over the weekend, and we should start to get a clearer picture of how this weather event will unfold by early next week.