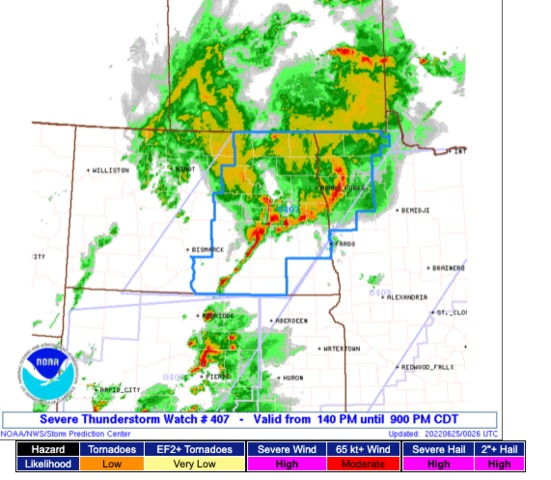 Areas of North and South Dakota have been under Severe Thunderstorm Watches on Friday, and these Watches, including the low risk of tornadoes, continue into the evening.

Tornadoes are intense rotating columns of air on the scale of a few hundred metres. They often form with severe thunderstorms that have strong wind shear. Or, in plain language, storms with winds that change significantly with height. Such winds tend to turn the air into long rotating tubes. Just like the rim of a wheel moves faster than a point near the centre, air that moves faster as it gets higher, tends turn the air in long tubes parallel to the ground. These "tubes" then get dragged up into the storm, transferring the axis of spinning from the horizontal to the vertical. Less like a child rolling down a hill, they're now more like a ballerina pirouetting.

Once the tornado gets going, the pressure dynamics of the storm keep it going. Moving from place to place within the storm and careening with perturbations of wind and pressure like half-done spaghetti, they're a dangerous weather phenomena that often affects the Midwest in autumn and early summer.

A mature tornado is in kept check by cyclostrophic balance, meaning the wind forces caused by pressure gradient changes between the centre of the tornado and the outside are balanced by the wind forces due to the spinning.

That's probably too technical for some and not technical enough for others, but the salient point is tornadoes are at least partially understood and frequently warned for in the US. Today's Watches were a result of a cold front pushing in from the northwest, crashing polar air into and over warm, humid southerlies from over the Gulf of Mexico.

Keep across the latest warnings at: https://www.spc.noaa.gov/products/watch/ 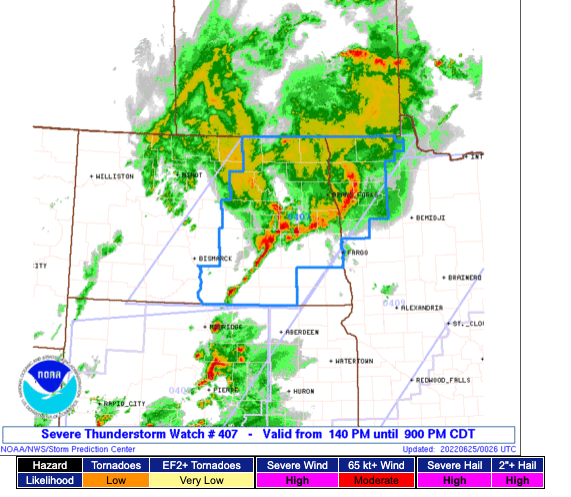