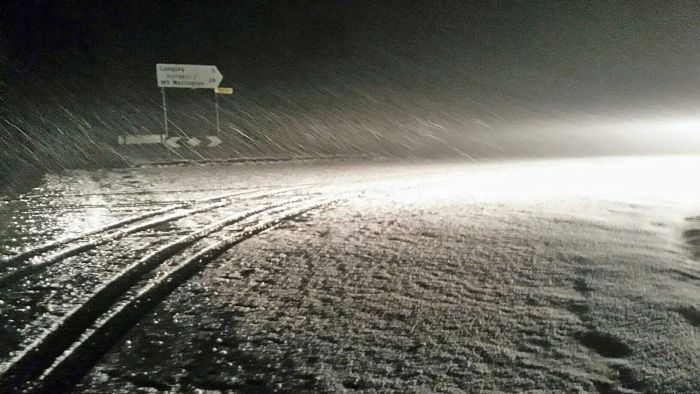 Source: ABC
Snow has affected some roads in Tasmania's south, prompting police to warn drivers to use extreme caution after a number of motorists were left stranded on Friday night. A number of roads were closed in the state's south this morning and The Midland Highway between Lovely Banks and Spring Hill was closed but has since re-opened. Police warned it was slippery with ice and snow, and extreme caution is required. The Bureau of Meteorology (BoM) forecasters said rain would melt the snow early in the day and reduce its impact on roads. BoM's Brooke Oakley said a very cold air mass moved over the state yesterday evening, bringing snow down to as low as 300 metres. "We are expecting that snow to melt pretty quickly this morning with all of the rain," she said. "However we do still have a road weather alert out but that's really just for early this morning until the rain melts all the snow." Overnight snowfalls stranded a number of motorists on the Huon Highway south of Hobart. Tasmania Police said a number of vehicles were stuck on Vince's Saddle. Officers in four-wheel drives were dispatched to assist the drivers, but they were warned to expect significant delays. The road was re-opened overnight, but then closed again this morning.
Note to media: You are welcome to republish text from the above news article as direct quotes from Weatherzone. When doing so, please reference www.weatherzone.com.au in the credit.