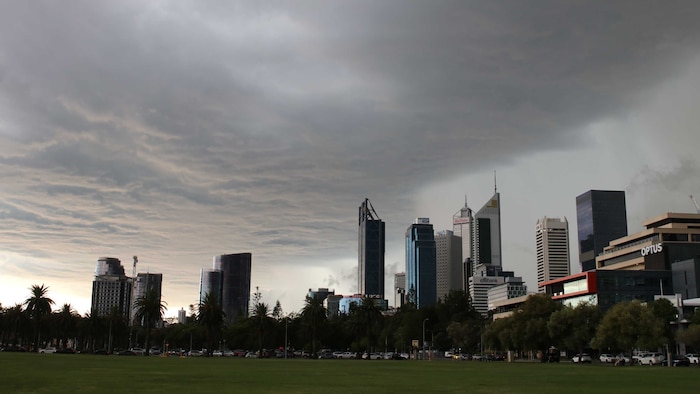 Source: ABC
Perth has recorded its wettest October since records began, after a low-pressure system delivered heavy downpours and hail to the south-west corner of the state last night.  According to the Bureau of Meteorology (BOM), which takes its official records from its Mt Lawley site, the previous record for the month was 96.4 millimetres, set in 1999. The Perth site officially surpassed that figure during the night, with total rainfall for the month currently at 119 millimetres, and there is more to come. BOM forecaster Pete Clegg said it was the wettest October in more than 50 years if taking previous measuring stations into consideration. "It's the wettest October, if we're looking back at previous sites, since 1965," he said.  "So if we're going back that far, then it's obviously quite an unusual situation to get that much rain in the month," he said. Tropical boost for rainfall  Mr Clegg said tropical moisture being fed into many of the systems had boosted rainfall figures. "There have been a number of rainfall days, 13 for the month and the average is nine," he said. "But we've had some really strong rainfall systems that have been assisted by tropical moisture feeding into them, particularly that one on the 19th and 20th of October.  "So that increased the rainfall in the system and it's really quite remarkable for October." Rainfall maps indicate much of the west coast of WA had recorded above-average rainfall this October. Unlike July?s rain, which was met with celebration by many in the agricultural sector, the latest rain was not well-timed according to farmers. Rain delays harvest Jackie Grylls, who farms at Bulyee in the central Wheatbelt, said downpours last night had caused some damage to canola crops in the district. "Our neighbours did get a bit damaged, they had canola growing in the paddocks next door," she said.  "It could have been the really heavy showers that knocked a few of those pods around. "We're thankful at the minute we haven't had too much damage from what happened overnight, but we really won't know the full extent until we get the headers in and see what's happened." She said the wet weather had also caused delays in harvest, but overall the season had been "amazing". "The crops have just thrived off the weather we've had, but now it's getting into the nitty-gritty end where we need the dry, long days to dry everything off and get everything off and in the bin," she said. It's the second time this year Perth has recorded significantly high monthly rain, with a series of cold fronts contributing to Perth's wettest July in over two decades.  Much of Australia's north and east has been tipped for both a wet winter and spring, with an emerging La Nina and negative Indian Ocean Dipole phase. But the two key climate drivers typically do not impact rainfall in the south-west of WA, according to BOM.