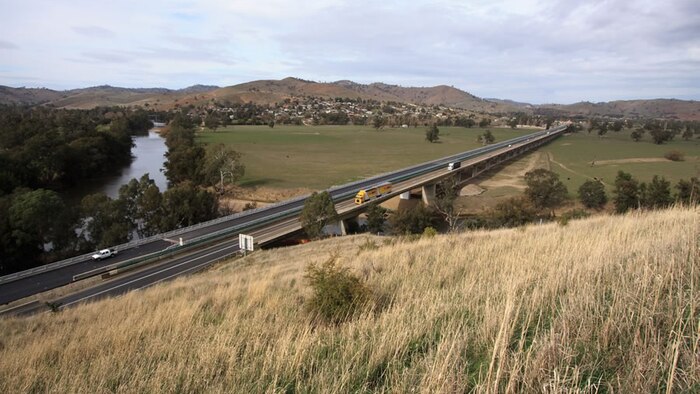 Source: ABC
The National Road Transport Association is calling for an upgrade of a major national highway bridge, claiming its weight limitations are a public safety risk.  NatRoad CEO Warren Clarke said the northbound Sheahan Bridge at Gundagai, built in 1977, could not be used by so-called "higher productivity vehicles". The bridge is located on the Hume Highway, between Sydney and Melbourne. "They're larger in size, they're generally safer vehicles and they're more efficient vehicles, so it's a big impediment to the industry and public when we can't get these high productivity vehicles on the road," Mr Clarke said. The southbound Sheahan Bridge, completed in 2009 at a cost of $78 million, is not affected.  Loss of nearby bridge exacerbating issue Mr Clarke said there was further pressure being placed on the northbound Sheahan bridge, following the demolition of a bridge at Wallendbeen, north of Gundagai, on the Burley Griffin Way. The bridge was torn down in March after it was damaged during heavy rain, with drivers currently having to use a 40-minute detour. Last month local state MP for Cootamundra Steph Cooke announced a temporary bridge would be built while a more permanent solution was planned, but no start date has yet been announced. "It's increased truck numbers across there quite dramatically and that's going to continue for some time until they can fix that other bridge," Mr Clarke said.  "Industry's been crying out for this bridge to be upgraded. "It's just a no-brainer, where you've got your public who are wanting less trucks on the road, they're wanting safer vehicles on the road, but this bridge is stopping all of this because we can't get the damn thing upgraded." Planning for bridge upgrade underway In a newsletter published last month, Transport for New South Wales said it had started planning to ensure the future capacity and efficiency for heavy vehicles at Gundagai. It said since the demolition of the bridge at Wallendbeen, the northbound Sheahan Bridge had been opened up to higher productivity vehicles under a permit system. But NatRoad's Mr Clarke said that was not a long-term solution. "These permits are guarded pretty heavily and not everyone can get them," he said. Transport for New South Wales has acknowledged it was a short-term solution and is looking at a number of options to ensure the permit system can continue. They include "limiting the northbound bridge to one lane of traffic for trucks, installing cameras and monitoring equipment on the bridge to identify vehicle numbers, loads and how the bridge responds to these loads". The authority said it was also carrying out in-depth investigations into future strengthening and upgrade work.