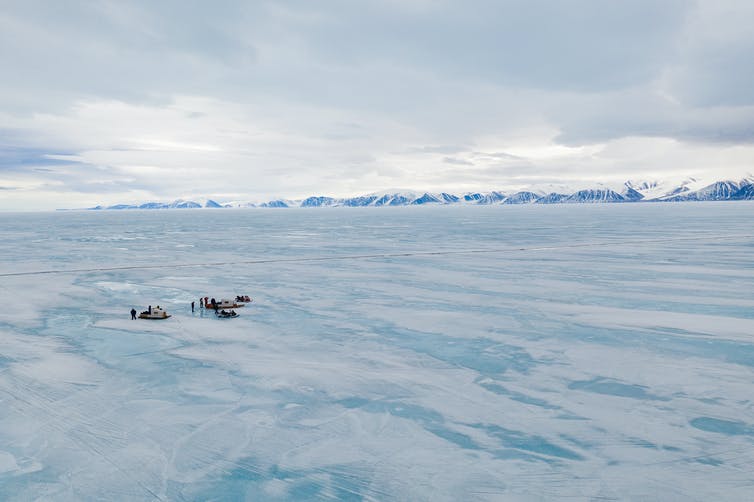 Image: theconversation. Source: Licensed as Creative Commons - attribution, no derivatives.
The Arctic is often thought of as a cold, white and snowy region, but this image is rapidly changing. The Arctic is currently warming much faster than the rest of the planet and is experiencing rapid sea ice loss . As a climate scientist and modeller, I am interested in what drives the Arctic climate and how it is expected to change with continued global warming. In our most recent study, my colleagues and I found that precipitation in the Arctic is changing more rapidly than was previously projected. In the Arctic, most precipitation falls in the form of snow. But the Arctic is quickly transitioning to a rain-dominated climate. In August, for example, it rained at the summit of Greenland's ice sheet for the first time . These changes will have huge implications on land, for wildlife and for human livelihoods. Earlier studies generally agree that precipitation will increase in the Arctic throughout this century and that this will more likely fall as rain than snow . But with the recent release of new data, we wanted to know how these projections may have changed. This data is generated through the Coupled Model Intercomparison Project , known as CMIP for short, and is freely open and accessible to all. This project essentially generates data, based on the same initial conditions, from about 50 centres around the world to better understand past, present and future climate. The data generated by these models provides information on current and future atmospheric and ocean temperatures, sea ice conditions and winds, to name only a few. The new model data is the output from the latest phase of this project, Phase 6, known as CMIP6 , which we compared to the previous phase, Phase 5 or CMIP5 . Read more: 5 things to watch for in the latest IPCC report on climate science As one can imagine, this means we have a lot of data, which when assessing the current and future climate is essential, because the climate and especially future climate change are difficult to predict. Nonetheless these models, which are like simulations, are the best representation of the climate we have. In fact, we were able to show in this study that the model data used, does a good job at simulating the observed climate as the average precipitation in the models is very similar to the observations. This means that we can have greater confidence in the models and of course their future projections. The study itself compared precipitation change at the end of the century (2090-2100) relative to the start of the century (2005-14), in all seasons between CMIP6 and CMIP5. Compared to CMIP5 projections, there will be more rain and less snow in the Arctic by the end of the century, particularly in autumn and winter. Most of these changes are due to greater increases in temperature, the transportation of moisture into the Arctic and declines of Arctic sea ice. More open water and moisture in the Arctic will lead to higher levels of water in the atmosphere, which will lead to more precipitation. This increase in water in the air along with warmer temperatures will mean more of this will fall as rain rather than snow. The transition to rain-dominated precipitation occurs a couple of decades earlier than predicted by previous models, depending on season and region. For example, the central Arctic becomes rain-dominated in autumn in 2070, instead of 2090. Our study also explored the changes in precipitation relative to global warming, and specifically with respect to the global agreements to stay within a 1.5 C world following the Paris Accord . If we can limit global warming to 1.5 C, most of the Arctic should remain dominated by snowfall. But if we continue with current projections, on target for 3 C of warming , then most of the Arctic will be rain-dominated by the end of the century. These faster changes in precipitation can cause many serious issues both within and outside of the Arctic. For example, rain-on-snow events, especially when followed by freezing temperatures, cause ice layers to form either on top of the snow or within it. Read more: Mass starvation of reindeer linked to climate change and habitat loss Not only does this make transportation and travel more difficult for people who live in the Arctic, but it means that many animals, such as reindeer and caribou, struggle to break through the ice crust to reach food beneath the snow. This can lead to huge die-offs . These changes also have global implications: Rain on the Greenland ice sheet, particularly around the coast, could lead to more glacial melt into the ocean and contribute to further sea level rise . While these changes are now expected to happen faster than previously thought and result in more severe effects, we can still be optimistic about our future if we can limit global warming to 1.5 C, as many world leaders have vowed to do. With reductions in our global emissions, the decline in Arctic snowfall will not be as extreme, meaning life can continue to prosper both in the Arctic and across the globe.
Note to media: You are welcome to republish text from the above news article as direct quotes from Weatherzone. When doing so, please reference www.weatherzone.com.au in the credit.