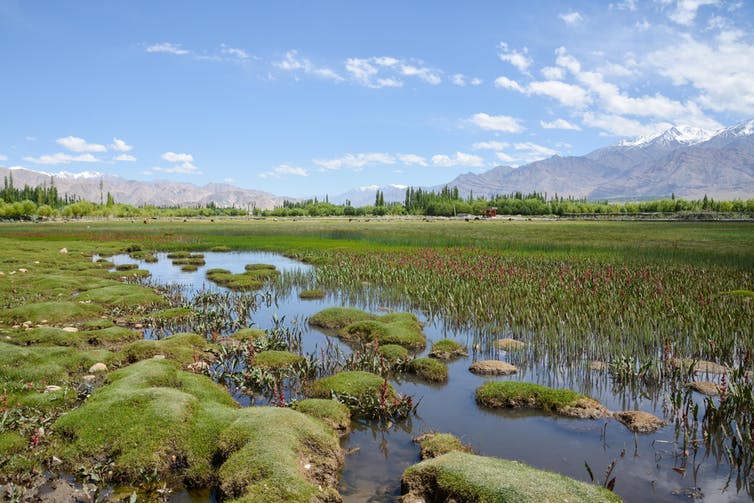 Image: theconversation. Source: Licensed as Creative Commons - attribution, no derivatives.
The past may be a surprisingly useful guide for predicting responses to future climate change. This is especially important for places where extreme weather has been the norm for a long time, such as the Indian subcontinent. Being able to reliably predict summer monsoon rainfall is critical to plan for the devastating impact it can have on the 1.7 billion people who live in the region. The onset of India's summer monsoon is linked to heat differences between the warmer land and cooler ocean, which causes a shift in prevailing wind direction. Winds blow over the Indian Ocean, picking up moisture, which falls as rain over the subcontinent from June to September. The monsoon season can bring drought and food shortages or severe flooding, depending on how much rain falls and in what duration. Understanding how the monsoon responded to an abrupt climate transition in the past can therefore help scientists better understand its behaviour in the future. When we researched this weather system's ancient past, we found it was highly sensitive to climate warming 130,000 years ago. Our new study published in Nature Geoscience showed that the Indian summer monsoon pulled heat and moisture into the northern hemisphere when Earth was entering a warmer climate around 130,000 years ago. This caused tropical wetlands to expand northwards - habitats that act as sources of methane, a greenhouse gas . This amplified global warming further and helped end the ice age. The rate at which today's climate is changing is unprecedented in the geological record, but our study shows how sensitive the Indian summer monsoon was during a global transition into warming in the past and may still be. Over the last one million years, the climate fluctuated between a cold glacial - known as an ice age - and a warm interglacial as the Earth's position relative to the sun wobbled in its orbit . The last transition from an ice age into the warm climate of the present interglacial - known as the Holocene - occurred around 18,000 years ago. This period of Earth's history is relatively well understood, but how Earth system processes responded to these climate changes deeper in time is still something of a mystery . A recent expedition to drill deep into the ocean floor of the Bay of Bengal gave an opportunity to reconstruct past Indian monsoon behaviour over hundreds of years before the last ice age. Our study used these deep sea sediments from the northern Bay of Bengal to capture a direct signal of the Indian summer monsoon from 140,000 to 128,000 years ago, hidden in the fossilised shells of tiny microscopic creatures called foraminifera. These plankton species once lived in the upper ocean water column and captured the environmental conditions of the surrounding seawater in the chemical make up of their shells. We detected the ocean surface water freshening from river discharge induced by the rains of the Indian summer monsoon from 140,000 to 128,000 years ago - a sign of the strengthening monsoon system. This occurred when the Earth was coming out of a glacial state and into the interglacial which occurred before the one we live in, separated by a single ice age. During this period - which we'll refer to as the penultimate deglaciation - sea levels rose from six to nine metres worldwide. Ice-core records show that Antarctica began to warm first during the penultimate deglaciation . Southern Hemisphere warming provided a source of heat and moisture which fuelled the strengthening of the Indian summer monsoon, as seen in our records of surface freshening and river runoff from the northern Bay of Bengal. During this warming period around 130,000 years ago, the Indian summer monsoon responded to southern hemisphere warming while the northern hemisphere and other monsoon systems, such as the East Asian summer monsoon - which affects modern day China, Japan and the Far East - remained in a glacial state. The Indian summer monsoon pulled heat and moisture northwards, driving glacial melting in the northern hemisphere and helping tropical wetlands expand their range. These expanding tropical wetlands resulted in more methane release into the atmosphere which caused even more warming , setting changes in motion which ended the global ice age. The Indian summer monsoon is an incredibly dynamic system. Though confined to the tropics, the system is sensitive to climatic conditions in both hemispheres. Due to its role in contributing to methane emissions, the Indian summer monsoon also has an outsize impact on the global climate. Monsoons should not be viewed in isolation, just as the polar ice sheets shouldn't. Earth's internal climate system is intrinsically linked and abrupt changes at one place can have significant consequences over time elsewhere. Climate change is inevitable. Our response to it isn't. Click here to subscribe to our climate action newsletter.