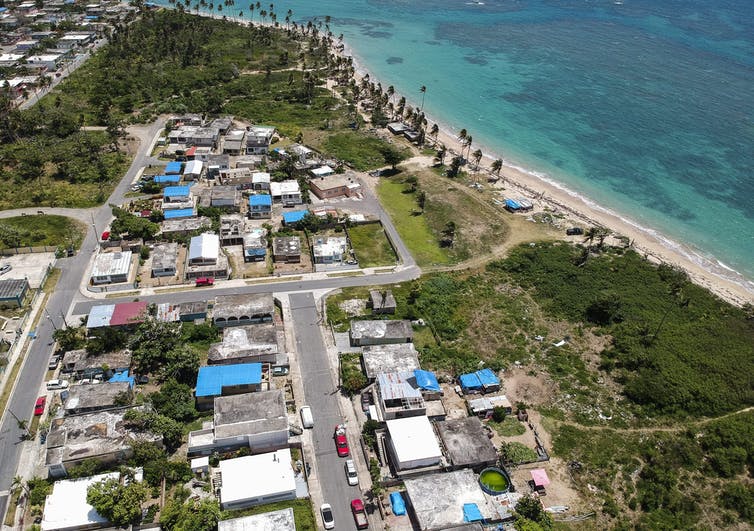 Image: theconversation. Source: Licensed as Creative Commons - attribution, no derivatives.
When President Donald Trump travelled to Puerto Rico in October 2017, shortly after Hurricane Maria hit the U.S. territory, he downplayed the hurricane's devastation . But his denials over the number of deaths only drew attention to the extent of the disaster -- and the social inequalities that contributed to the catastrophe. Most of the burden had fallen to the poorest and most vulnerable families. The Puerto Rican government estimated 400,000 houses -- one-third of all occupied homes on the island -- were damaged by the storm. About 55 per cent of the island's structures are built informally , without licensed contractors or permitting. Many poor communities are located in high-risk flood zones where land is affordable. In addition, areas of lowest socio-economic status experienced the highest rates of the estimated 2,975 excess hurricane-related deaths. My own research into what influenced the impacts of Hurricane Maria shows that social factors, such as race, gender, income and education levels, played a larger role in determining residential damage than the physical impacts of the storm (strong winds, floods and landslides). This means that social and economic issues that arose long before the storm's landfall were among the top predictors of damage -- and can be addressed to limit the extent of future disasters. Nearly 16 years ago, Hurricane Katrina starkly exposed how disasters affect some groups unfairly. Images of African American New Orleans residents forced onto rooftops due to flooding, and suffering under inhuman conditions in the Louisiana Superdome, sparked a cultural debate about systemic racism and its role in public health and so-called natural disasters. Katrina shed light on the uncomfortable realities that Black people already understood. Long-standing racism had clearly contributed to the storm's damage. We have learned from past disasters that the dominant social challenges include socio-economic status, race, gender and class, among more complex factors like health-care quality, the ability to prepare and having access to transportation. Nevertheless, social challenges continue to influence physical risk in every catastrophic event. This includes wildfires , heat waves , floods , tsunamis and earthquakes . Even pandemics target vulnerable communities. Vulnerable populations not only suffer intense damage, like property loss, they are also less likely to fully recover before the next disaster. In 2020, Puerto Rico experienced a series of major earthquakes, damaging some homes that still had blue tarps covering their roofs from Hurricane Maria. This feedback further amplifies inequality over time. In the chaos following a disaster, aid resources are often directed towards areas that experienced the most intense damage, but these often neglect the social context that contributed to the outcome. In some cases, recovery policies systematically exclude vulnerable groups. Renters , multi-family households and racial and ethnic communities face barriers to aid following disasters. For example, the Federal Emergency Management Agency found most of the applications it received from people in Puerto Rico following Hurricane Maria were ineligible . This is largely because the applicants were unable to prove that they owned their homes. For some, the documents had been lost or destroyed by the storm itself. For others, family homes were passed down through generations without legal documentation because of expensive fees . Future warming trends may fuel stronger storms reaching new areas and may double hurricane-related losses every 10 years . This cycle needs to be disrupted. Governments and aid agencies need to consider race and class in their policies to ensure nondiscriminatory recovery. While society cannot control natural events, economic and political decisions lay the foundation for the outcomes. These decisions can increase a community's risk or promote resiliency and equity. Investing in infrastructure, like levees, can lower disaster risk. However, if an extreme event exceeds the capacity of these structures, the resulting damage can in fact be much greater . In part, this is because built infrastructure encourages development in otherwise risky areas. Smart policy decisions that bridge wealth gaps can indirectly lower disaster recovery costs . Communities should be directly involved in developing plans to improve resilience, as these policies are more likely to succeed. Investments in affordable housing, libraries, green spaces and schools and the creation of job opportunities promotes social mobility. As a result, more families can afford home repairs, insurance, evacuation costs and may even be able to move to less hazardous areas. When a powerful hurricane makes landfall near a populated coastal area, it's the decisions made by people that ultimately determine what is damaged and who dies. Hurricanes Maria and Katrina were not entirely preventable, but neither were they unexpected. Acknowledging the socially rooted realities of these events offers an opportunity to correct our current course.
Note to media: You are welcome to republish text from the above news article as direct quotes from Weatherzone. When doing so, please reference www.weatherzone.com.au in the credit.