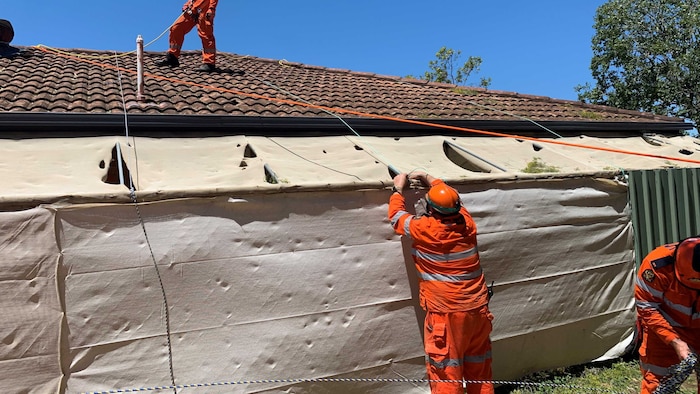 Source: ABC
Anger towards the insurance industry is growing as Springfield residents find themselves fighting to get their homes repaired after last year's Halloween hailstorm. The fierce storm saw hail stones as big as cricket balls smash south-east Queensland, damaging thousands of homes. Springfield, west of Brisbane, was hard hit and while some homes are gradually being repaired, others still have leaking roofs, unreliable power connections and unclear timelines for completion. Peter Neumann was still waiting to find out when the still-leaking roof of his Springfield Lakes home would be fixed. "To have part power, part air-con, the roof leaking, water coming through lights and air fittings ? it's been quite stressful at times," Mr Neumann said. "The roof not being fixed and still leaking since October, that's been painful ? it's been a painful experience to get to where we have." Mr Neumann said he blamed the poor communication between his insurance company and its contractors for the delays. "They wanted to put the insulation in the roof but the roof's still leaking," Mr Neumann said. "The whole thing has just been crazy and unorganised. "They're going to go back now and look at the costs and make sure things are fair and we should have something happening in the next six months." 'Continuous fight day after day' Just down the road, Tracy Fry is one of the lucky ones ? she has been able to move back into her Springfield Lakes home because all the major repairs were complete. Ms Fry's roof and ceiling was smashed by the cricket ball-sized hailstones in October, damaging furniture and the inside of her house. Delays in repairs also led to further damage in subsequent storms but now, Ms Fry and her partner are back home with their two dogs. She said she felt for those who were still struggling to get their homes repaired. "I'm grateful that I'm in ? I feel bad for the other people in the community who aren't in and are having hassles," Ms Fry said. "I guess for them everyone is tired of hearing ? 'COVID, we can't get stuff, we have to import stuff, blah blah'." But Ms Fry said she too had struggled to communicate with her insurance company. "If people communicated earlier and told us the process and how things work it would be better," she said. "It was a continuous fight day after day ? 'this thing's gone, that's gone', 'fill in this piece of paper'."   Communication breakdown with insurers Ipswich Deputy Mayor Nicole Jonic saw a need to address the breakdown in communication in March and set up a council task force to support affected residents. "This disaster was very rare, so a lot of people had the same damage and the trades and the materials they needed were very common, so not discounting that," Cr Jonic said. "But then it comes to [insurance company] call centres and their staff and what training they're receiving to communicate properly with their clients what next steps are. "I have a number of residents that have to chase and chase and chase ? it's wearing people down, people are already feeling the strain mentally." Cr Jonic said she was concerned insurers were not acting in good faith with their customers. "That was fundamental in my eyes so our residents could know exactly what insurance companies' responsibilities are under their code of conduct under a catastrophe event," she said. "There was a March forum that was held by the Insurance Council Australia ? there were a lot of people who hadn't received a scope of works yet ? which was really concerning." Thousands of claims remain outstanding The insurance bill for south-east Queensland had climbed to $980 million and 42,000 claims for damaged homes, cars and contents lodged by May, an increase on previous months. There are 14,000 claims still outstanding, but it is unclear how many damaged homes are among that figure. The Insurance Council of Australia (ICA) said 64 per cent of claims had been finalised by the end of last month but would not say if that was more or less than the previous period. A rising number of claims could set the completion percentage back. The Queensland Reconstruction Authority said after the October 31 hailstorm, the Queensland Fire and Emergency Services (QFES) completed 1,774 damage assessments of properties in the Ipswich and Logan council areas. These assessments identified 520 properties with severe damage, 602 dwellings with moderate damage and 652 properties with minor damage. The QRA said the number of tarps on roofs was down from 704 in February to less than 200 this month. In May 2021, the QRA completed its second reconstruction monitoring assessment bringing the total properties inspected to 2,214. "Of the 2,214 properties inspected, more than 1,886 properties ? which equates to about 85 per cent ? have been repaired or works are underway," the QRA said. Material and trades shortages An ICA spokeswoman said material and trades shortages and the ongoing coronavirus pandemic were causing the delays but she did not address the concerns of poor communication by insurers. "ICA has been actively working with the Queensland government and the building industry associations to find ways to increase the availability of critical trades in the state," she said. "Unfortunately, increasing the availability of trades and materials to repair damaged homes is not easily resolved and industry is having to compete with a national surge in new building construction." Cr Jonic said Springfield residents deserved answers for what role communication breakdowns had played in the delays. "People have had to move far, far away, they've had to change their kids school ? there are so many affected elements, a domino effect for something like this," she said. "What it comes down to is those trades are contracted to the insurers and they need to handle that a lot better."