Extent of massive inland NSW flooding revealed from the air ? and more rain is on the way 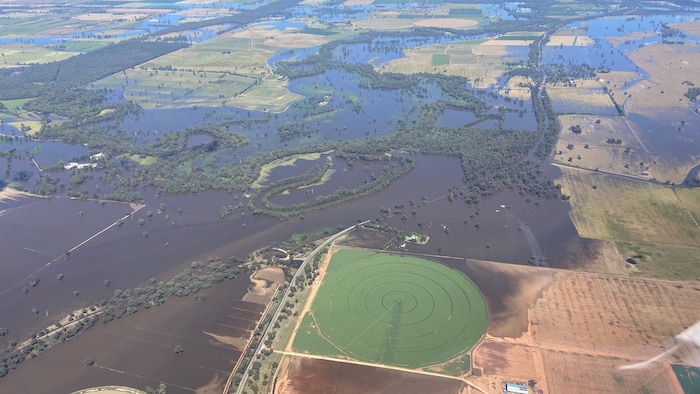 Source: ABC
Photography from the sky has revealed how much farmland has been inundated by inland New South Wales rivers flooding ? so far. Bathurst pilot David Carroll took to the air on Thursday, capturing striking images of lush green paddocks being quietly enveloped by the brown water. The Lachlan River peaked at the Forbes Iron Bridge on Thursday afternoon, according to the Bureau of Meteorology, slightly below the level of the devastating 2016 event. That peak has now moved downstream, and the Bureau says moderate flooding will continue in the town while water is released from Wyangala Dam. The gauge at Cottons Weir peaked near 7 metres on Friday, and a peak at the marker at the Jemalong weir is expected on Monday. But with more rain forecast, this flood may not be over. Satellite images taken by the European Union's Copernicus Sentinel-2 show the water slowly creeping across the region, even though the rainfall that began this disaster fell a week ago. Flood watches have been issued for catchments across the state. Water NSW manages dams and is keeping a close eye on Wyangala, which spills into the Lachlan.  Releases of up to 100 gigalitres a day have been made over the past week in an effort to create "airspace" in the dam, allowing room for future inflows. It is now about 95 per cent full, ahead of the rain forecast to hit the catchment as early as Sunday morning. Spokesman Tony Webber said it was an anxious time for both water managers and farmers downstream. "In the case of Wyangala, that dam has received its entire capacity in the last four to five months," he said. "It's received more water in the last four or five months than it did in the previous four years." The predicted widespread rainfall has prompted the State Emergency Service to issue flood alerts for several rivers. They include several in Northern NSW, but Mr Webber called the Lachlan, the Murrumbidgee in the south and the Macquarie in central NSW "valleys of concern". "Since the last rain event, we've been making large releases out of dams in the Lachlan and the Murrumbidgee, just to build some capacity in those storages to absorb the next inflows," Mr Webber said. "But obviously, with full dams, the rivers peaking downstream, and the catchments saturated, there's only so much we can do."