There are signs of the change of season across southeastern Australia this Wednesday afternoon, with strongly contrasting temperatures in a wide arc from Brisbane, across to Adelaide, and all the way down to Hobart.

As we started writing this story around 4:30 pm AEDT, temps were as high as 36°C in inland parts of southern Qld such as the Darling Downs, and as low as 2.9°C at Kunanyi/Mt Wellington above Hobart.

You can see the temperature differences illustrated well in the image below. 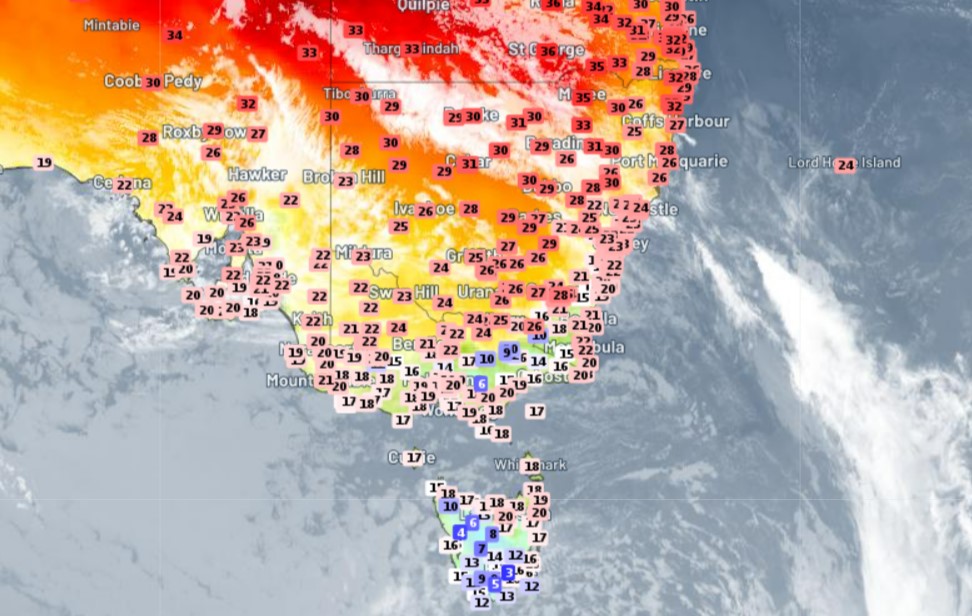 The contrast was not quite as extreme in coastal locations, but was still pretty dramatic.

So what's behind the temperature contrasts?

A cold front in the Tasman Sea with a cold airmass behind it in the Southern Ocean has driven cooler air northwards about as far north as the NSW/Victorian border.

Meanwhile a trough ahead of the front has linked up with another trough associated with Tropical Cyclone Charlotte way up off the NW West Australian WA coast.

That cyclone might seem an awfully long way off to affect weather in NSW and southern Qld, but it has dragged warm air southeast all the way across the country.

Hot days with temperatures around the mid 30s look to continue in northern NSW and southern Qld for the next couple of days, while anywhere south of there and east of about Adelaide will stay comparatively mild until later in the week and into the weekend.

Don't forget that yet another severe rain event is also on its way for eastern Australia. You can read about that here.