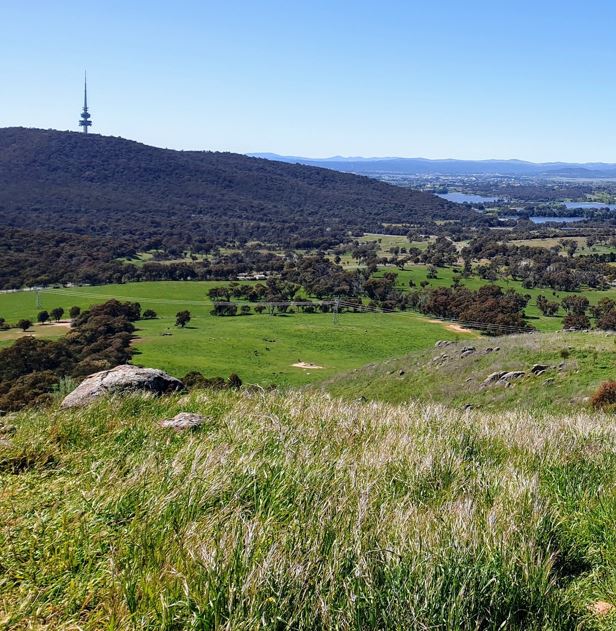 Back in the 1990s when the Canberra Raiders NRL team was winning grand finals, they turned city fountains green with dye and even the milk in supermarkets got a lime green tinge from food colouring.

You could be excused for thinking the Raiders had won this year (even though they missed the finals) because the entire national capital region looks like it has had industrial strength green dye tipped all over it. Image: Wait, is that Ireland? To be sure it is not. Source: Liz Darvill.

Yes, Canberra is green right now. The view above is from Mt Painter in Belconnen looking towards the iconic Black Mountain.

In summer, these grasslands typically turn yellow, then brown, then a kind of dull grey in April and May – the city's two driest months. Occasionally the whole landscape turns to dust, which is pretty much what happened in the Black Summer of 2019/20.

But Canberra has had a pretty decent couple of years of rainfall since then.

Meanwhile Spring 2021 has also been lovely and wet by local standards to date.

And that's why the city looks like this right now. But the lush greenness of Canberra right now is perhaps best summed up not by a landscape shot, but by a streetscape. Anyone who's spent time in Canberra knows how dry and dusty the lawns and unwatered areas of open space can get. Not right now. Canberra was actually tipped to get more rain this Tuesday, and while light to moderate falls have been recorded to the south and east of the city, the showers have missed the capital so far.

There's still the chance of more showers this week, however, especially on the weekend.