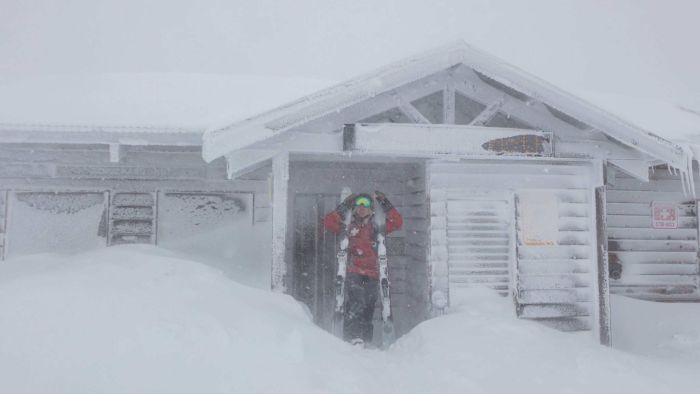 Source: ABC
Victoria's alpine areas are being pummelled by blizzard conditions, with the heaviest snowfalls of the season, as a powerful cold front makes its way across the state. The front began battering the south-west Saturday evening and peaked in Melbourne in the early hours of Sunday, with some bayside suburbs hit by gusts of up to 80 kilometres per hour. Bureau of Meteorology senior forecaster Dean Stewart said a severe weather warning had been cancelled for the alps, but blizzards were still occurring. "The winds have just eased below our severe weather threshold, but nevertheless we're still getting winds averaging about 50 to 60kph with gusts up around 85kph," he said. "The winds might still be strong enough to cause virtually white-out conditions with that blowing snow. "There'll be some easing of the snow into this evening, however there'll be further snow returning around midnight." He said it was difficult to ascertain the exact strength of the winds in the alps because the harsh conditions had caused wind sensors to partially freeze. Mount Hotham's Buff Farnell said the snow had not let up since dawn. "It's been dumping hard all day ... it's as hard as I've seen it snow, flakes the size of 20-cent pieces and just hammering down all day," he said. "I went into some spots that hadn't been skied and it was well above my boots, so that's like 40 centimetres deep, but might include a bit of overnight accumulation." Mr Dean said another 10 to 15 centimetres of snowfall was expected on Monday. On Saturday, holiday makers at Victoria's alps awoke to fresh snow dumps, . The and stick to marked ski runs. "Ensure you play it safe up there," SES deputy chief officer David Baker said on Friday. "It's going to be big dumps, hopefully very enjoyable, but blizzards can pose particular dangers and we don't want anybody to go missing up in the mountains." The conditions caused the Great Alpine Road to be closed, due to poor visibility. Snow dumps for NSW as blizzard conditions hit state's south Meanwhile, southern New South Wales is also experiencing blizzard conditions. Thredbo has had more than 25 centimetres of snowfall in the past 24 hours, while Perisher has recorded 56 centimetres.