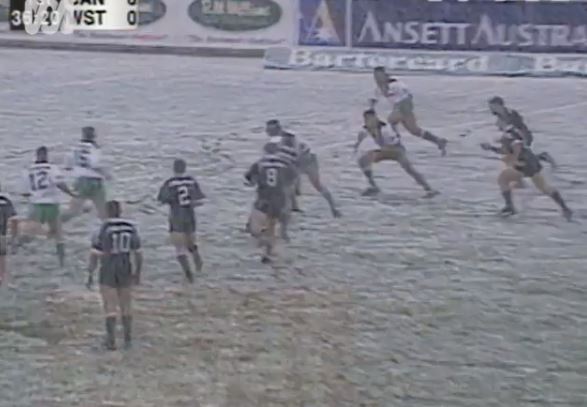 It was the only NRL match ever played on a snow-covered field, and the most remarkable thing is that it wasn't even winter.

On the 28th of May, 2000, the Wests Tigers travelled to Canberra to play the Raiders. It was Round 17 of an NRL Season which would finish early so that Stadium Australia would be ready in time for the Sydney Olympics, which began on September 15.

Winter came early too, as an incredibly strong cold front swept its way across the whole of southeast Australia, leaving up to a metre of snow in the mountains and delivering flakes as low as 300 or 400 metres above sea  level in parts of New Souuth Wales and Victoria.

Canberra Stadium sits at just over 600 metres, so it was well and truly above the snow line on this frigid Sunday afternoon.

From the moment the brave crowd started making its way into the ground, it's clear this was no normal day at the footy. Sideline reporters were pelted with snowballs. And the match itself was what you'd call a scrappy affair, for understandable reasons.

Tigers fullback Joel Caine - who these days is well known as the face of one of the sports betting agencies - wrote a terrific piece about the game a couple of years ago for the site AthletesVoice. It included a hilarious anecdote when the shivering Tigers ignored coach Wayne Pearce's half-time talk because they were just too cold. Image. There are greasy surfaces and then there's this. Source: ABC TV.

"At halftime, I think we were about 12 points down and our coach Wayne Pearce said, 'Get your arses in here,'" Caine wrote.

"Basically what happened was everybody just walked straight past him. It was contagious. You knew you were doing the wrong thing, but you just did it anyway. We took our jerseys off and we went straight into the warm showers.

"Junior was screaming at us to come back in and no one budged. We just couldn't bring ourselves to not thaw out in the shower. The idea of having to come out in the second half was just... ugh.

"But in a way the showers were the worst thing we did, because temporarily we felt good, then were freezing cold again when we got back out there the second half.

"We didn't hear a single thing Junior said at halftime other than 'Get your arses back out there'. He probably should have jumped in the showers with us and done the team talk there!

"I don't think there would have been many mutinies against Junior in his career, but it wasn't anything personal. It was just the cold."

The famous snow game from 2000.
And a Raiders all time great Greg Wolfgramm caps off a great try in the snow off a bad Tigers mistake.
Raiders vs Tigers 2000#canberraraiders #canberraraiders #raiders #bleedgreen #snow #NRL #RigbyLeague #classic pic.twitter.com/vG1RMl2Rlz

Caine tells another hilarious tale about a kick he was lining up from near the sideline.

"I'm lining this kick up from the sideline and I've already talked myself out of the kick. I can't feel my toes, and when I put my hand on the ball, I vividly remember there was no sense of feel on this ball.

"So I'm lining it up, I get back to my mark, and as I say I've already convinced myself that it's not going over. The whole motive of this kick is to not to be embarrassed by it.

"And I'm thinking, 'What the hell are you doing here, mate?' There's one supporter on the 20 metre line and he's leaning over the fence giving me the ultimate spray. I think I may have even said to him, 'Mate, I've already talked myself out of this, I don’t need your assistance', and sure enough, the kick went nowhere near the posts!

And it's amazing how one game sticks in the memory, all because of the weather

The AFL of course enjoyed a brief snowfall in 2019 at a Giants game played at Canberra's Manuka Oval.

Snow falls during the Giants vs Hawks game at Manuka Oval. Welcome to Canberra ðŸ¥¶ pic.twitter.com/ZGIzZAkGl8

While flakes could clearly be seen tumbling from the sky in the first term and at the first break, the ground never turned white in the brief flurries.

Oh, and for the record, the visiting Hawthorn Hawks beat the Giants by a large margin. And the Raiders beat the Tigers 24-22 that day, even though the Tigers sat 2nd on the ladder at the time.

That gives Sydney teams a 0-2 record in the snow, which Joel Caine and his sports bookie mates have probably noted.

And for those who love old weather charts as much as (or more than) footy, here's the chart that day from the Bureau of Meteorology archive.