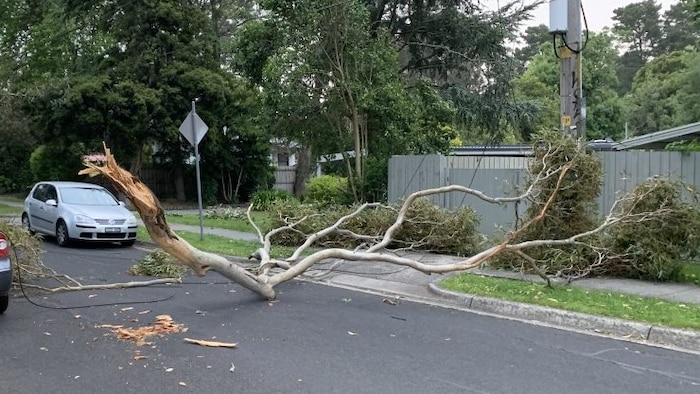 Source: ABC
The Victorian State Emergency Service (SES) has responded to thousands of calls for help after storms battered the state last night.   A severe weather warning for damaging winds remains in place for the state's south-east, but conditions across the rest of Victoria have now eased. The weather bureau said the highest wind gusts were recorded at Mount William in the Grampians, at 143 kilometres per hour. Melbourne Airport recorded gusts of 119 kph, while St Kilda recorded 115 kph. The SES received more than 3,000 calls for help since midnight. Jamie Devenish from the SES said most of the calls related to downed trees or building damage. Emergency Services Minister Jaclyn Symes asked people who had called the SES to be patient because the sheer number of calls had led to delays. She also asked people to check on their neighbours.  But she said there had been no reports of anyone injured or any communities left isolated by the wild weather. The weather bureau's Mark Anolak said some of the wind strengths across Melbourne's east this morning were more powerful than expected. "Some of our stations across the south-eastern suburbs of Melbourne recorded their strongest wind gusts that they ever have recorded," he said. Frankston recorded its strongest wind gust in 15 years, with a speed of 122km/h detected just before 8am this morning. He said conditions would continue to ease in Victoria, giving way to fine weather at the weekend and at the beginning of next week. Mass power outages, 'major delays' for trains  Tens of thousands of properties are without power across the state. Energy Minister Lily D'Ambrosio said 526,000 Victorian properties were without power at 8:30am, which amounted to almost one quarter of Victorian properties. "So a very, very significant number," she said. "What we've seen is another extraordinary event in Victoria." Ms D'Ambrosio said power companies were making "strong progress" in returning electricity supplies, but by 2:30pm, 328,000 properties remained without power. Powercor's Emma Tynor said some customers could remain without power across the weekend.  "We've seen over 100 different faults across that Powercor network. Make plans knowing that power may not come back on today," she said. "In the Powercor network we've now got about 130,000 customers off power and in the CitiPower area about about 31,000 customers."  AusNet spokesperson Helena Lilley said it was too early to say when power would be restored to their customers. "The problem is, if crews haven't been into the area to assess the damage, it's difficult to understand the extent and when it will be restored but we've got extra crews on hand," she said. There were also disruptions to public transport services. Metro Trains said all its services had experienced "major delays". SES chief operations officer Tim Wiebusch urged motorists to take extra care on the roads, especially after Victoria's COVID-19 restrictions eased at 6pm. He urged people planning to travel to check for road closures and said anyone planning to visit state parks this weekend should check for campsite closures. Several V/Line services also experienced interruptions. Ambulance Victoria said there was a slight increase in calls for respiratory cases across the state, but the epidemic thunderstorm asthma emergency authorities had feared did not eventuate. Rebecca, in Ringwood in Melbourne's east, told ABC Radio Melbourne she was woken by a falling gumtree outside her son's bedroom window. "It's split in half and the branches were actually thrown across the backyard and fallen and [it] has just missed his bedroom," she said. "It was a tree that I always worried about but we're really lucky."  Shane, from Chum Creek in Melbourne's outer north-east, told ABC Radio Melbourne he had lost power. "I woke up early this morning, probably about 4:30, power went out, sat in darkness," he said. "I've got a little lamp on at the moment and of course the radio. And [I'm] hanging for a coffee, mate, and I can't even make one of those."