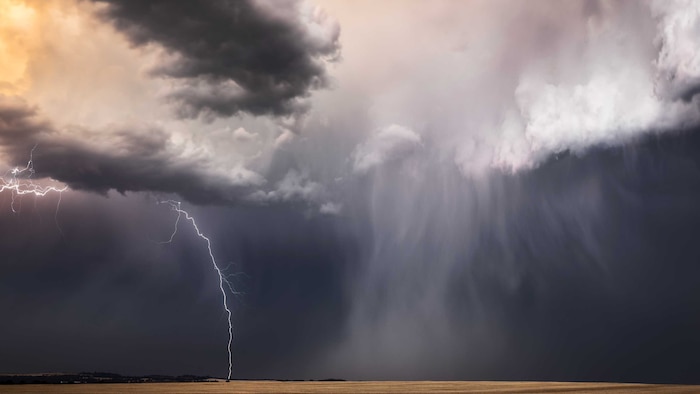 Source: ABC
Strong winds have brought down trees and left homes without power as a significant weather system hit WA's west coast this morning.  The Department of Fire and Emergency Services (DFES) issued a severe weather warning this morning for a large chunk of the state including Perth and parts of the Pilbara, Midwest-Gascoyne, Goldfields-Midlands and South West. Perth experienced heavy rain while damaging winds blew trees onto the roofs of houses and cars in a pocket of the metropolitan area around Doubleview, Floreat and Wembley Downs. The Department of Fire and Emergency Services (DFES) received 20 calls since 6am this morning, including from people in Bunbury and Geraldton. In Watermans Bay, a tree fell on a home on Hope Street and then rolled onto a car. Trees also caused roof damage on two homes in Wembley Downs, two homes in Floreat, one in Doubleview and one in Scarborough. Western Power reported 17 separate outages across the state but they are all relatively small ? the biggest is in the Perth suburb of Greenwood, which is affecting 208 homes. Farmers in WA's Mid West on the cusp of a record harvest have raced to get as much of their crop cut as possible as the wild weather threatened to damage crops, with wind gusts in excess of 125kph possible tonight and tomorrow morning.  It is also likely to propel Perth to double its monthly rainfall average for the month, with forecast totals of between 25-30mm today and further falls tomorrow. BoM senior forecaster Noel Puzey said there would be two parts to the system, which began with a moisture-laden band of cloud moving over the state from early this morning.  Mr Puzey said the rain was expected to ease off as the system moved inland, but those parts of the state would experience gusty winds. Mr Puzey said the front would be followed by a low-pressure system approaching the west coast later today and into tomorrow, which could see heavy rainfall, further gusty winds and possible thunderstorms. "The very tight gradient between Denham and Mandurah will bring very gusty winds on the coast again, up to about 100 kph, but also the risk of a thunderstorm and some heavy showers as well," he said.  "Things will ease fairly rapidly during the day on Wednesday, [with] a couple of showers remaining on the south coast and west coast south of Perth, even into Thursday." 'Brutal' heat forecast for WA's north Meanwhile, in WA's north, heatwave conditions are on the horizon. By the end of this week, Broome will be experiencing an "extreme" heatwave, reaching 42 degrees on Saturday, as will parts of the East Kimberley.  Mr Puzey said temperatures had been building up over the region, with winds struggling to provide relief. "Heatwave conditions includes calculations involving the minimum temperature as well," he said.  "So not only will it be quite hot, and we're talking in the range of sort of 40 to 43 degrees for some of the main parts of the North Kimberley there, but the minimum temperatures will be [about] 27 or 28 degrees, so there's not a lot of relief even overnight." Race to harvest ahead of weather Farmers in the Mid West, like Mullewa's Rod Messina, have spent the last few days pushing to get crops harvested ahead of the weather system, with concerns it may cause damage. "I'd say we're pushing the friendship at the moment, we've blocked the header a few times, we've snapped a few belts in the last couple of days but we're just trying to make a start," he said. Mr Messina said the season had been fantastic so far. "I think profitability-wise, it could potentially be a record for us," he said.  "Yield-wise, I don't think it will for us but it's going to be extremely close to the best ever. It's nice to be on the winning end." But he said the rainfall could threaten totals, depending on its intensity. "Worst-case scenario is that we get quite a big deluge and it strips the pods off the plants, and potentially hail," he said. "But hopefully none if it will happen and it will be a nice gentle rain, as bad as it is this time of year for us." Hail is not forecast for the Mid West, but Mr Puzey said there was the potential for significant rain.