Walgett loses all water, some air conditioning as heatwave pushes temperatures near 40 degrees 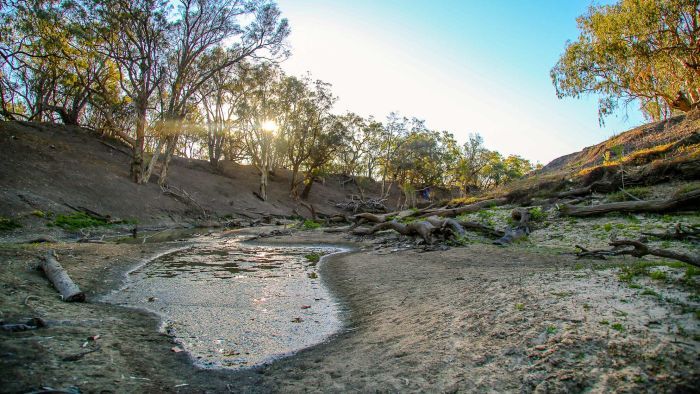 Image: ABC Western Plains. Source: ABC
Walgett residents have been left without water for a day after a breakdown at the local treatment plant, which also left some people without air conditioners, as western New South Wales sweated through a heatwave. The local council issued an urgent warning for the community to conserve their use of filtered water . On Thursday, locals reported there was little to no water flow, with the pressure too low for many evaporative air conditioners to operate. Some businesses were forced to close, including local butcher, bakery and deli services. Walgett's temperature peaked at 39.4 degrees during the water shortage. Walgett resident Margaret McIntyre is mother to three young boys, aged between one and nine. "I had no aircon [Thursday]. My kids were so hot we had a single fan and it was blowing hot air," Ms McIntyre said. Local woman Donna Therese says the town's water security must be secured urgently. "Some of our elderly community members did not have use of a cooling system [Thursday] because there was no water getting to their evaporative air conditioners. The heatwave out here is extreme," she said. Reliant on emergency bore water The problem was sparked by a high voltage fault at the water treatment plant on Wednesday night which the council says occurred due to "unforeseen circumstances". A complete power failure at the plant caused problems with the control board so water could not travel from the bore to the reservoir. Water levels in the reservoir quickly dropped from near-full capacity to below 25 per cent. Engineers and council workers fixed the problem on Thursday evening, and by Friday morning the water supply was restored. However, the warning to conserve water remains in place for the community while the reservoir refills. It is the latest setback for the remote community as Walgett struggles through a water crisis. The town is currently on level six restrictions and relies on an emergency supply of bore water. Recent tests of the bore water supply also . The council's new general manager, Greg Ingham, said he was investigating how to secure the region's water supply so it is not impacted by mechanical breakdowns. "I'm a bit perturbed that in this day and age there didn't appear to be a back up," he said. "It may be more technical than that. But we need to ensure in the future that there is back up for these unforeseen circumstances. "We have got a limitless supply of bore water. We need to make sure that our systems and our pumps can extract that water. We can treat it and we can continue to supply it to the community. "Although rain water is preferable, the climate is changing, and we have to accept we could possibly have these long, dry conditions forever." Considering giving up pets under limited water The water crisis is coming at a huge cost to Walgett local Margaret McIntyre's young family. "I have used over 50 litres of drinking water which my mum bought up at Christmas," the mother of three said. "Luckily I breastfeed, but if I used bottles I would have to fork out thousands [of dollars] on safe water to drink." Ms McIntyre said water was so scarce her family was considering giving away their pets. "We have been having to use indoor water for our dogs, chickens and pigs," she said. "We will soon have to either sell our pets, which are part of the family, or pay for their water. "The government needs to open their eyes." Fellow resident Donna Therese said the issue must be dealt with urgently. "Our water situation is at critical level. This has been going on in our community for months and I don't understand why our elected members of parliament are not taking this seriously," she said. "Are we to run out of water completely before this is seen as a state of emergency?"