Unrecorded rainfall a dampener on debate around Tennant Creek satellite 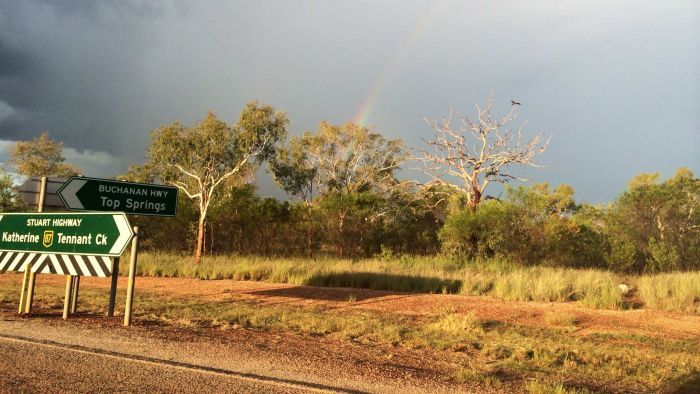 Image: ABC Rural. Source: ABC
Residents in Tennant Creek say last weekend's rainfall was not recorded by the system that controversially replaced the local weather radar last year. Youth worker Peter Cain said a "thunderstorm of sorts" on Friday had not shown up on the official records by the Bureau of Meteorology (BoM). "We had some thunder and lightning, it drenched the kids trying to get home from school," he told . "It seems to have been around 10 to 12 [millimetres] around most of town but according to the bureau we didn't get a drop." He said this latest incident came after a system fault affected rain readings in September. "It's actually really, really important that we get some sort of accurate measurement of rain and some sort of knowledge of when the rain is coming," he said. "Of course without a radar it makes it extremely difficult." The Barkly region weather radar was controversially shut down last year despite protests from property owners and . Cattlemen said the replacement satellite images, which capture cloud formation but not real-time rainfall, . Collecting signatures and counting costs Tennant Creek electrician Mike Nash has been circulating a survey to help illustrate the impact of the radar's closure on local businesses. He said he wanted to show "how much money people have to spend pulling people out of bogs and how much unforeseen information is affecting their businesses". "Forecasts are lovely and reading the details of something that happened yesterday is also lovely, but you need to know what you're driving into and you need to know if you go that way or the other way." Mr Cain said the issue remained a concern for residents of Tennant Creek and surrounding communities and stations but that no politicians were prioritising the matter. "We simply don't have enough votes out here to count. "But we're real people with real lives and perhaps we should count a little more than we do." Communication problem rectified In a statement, the BOM's acting regional director for the Northern Territory, Ben Suter, said issues with a communication function that meant recordings weren't showing on the website last month had been rectified. He said no further issues had been identified with the equipment. "Rainfall can be highly variable from one location to the next in the NT," Mr Suter said. "It's not unusual to see one rain gauge recording a couple of millimetres whilst another gauge a couple of kilometres away records much more rain," he said.