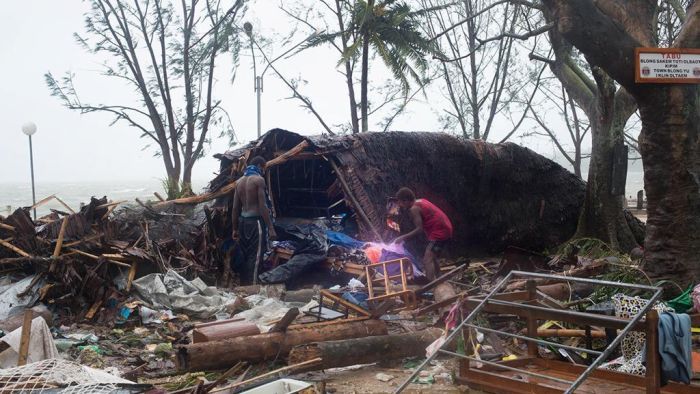 Source: ABC licensed
Vanuatu's government has declared a state of emergency for Shefa province, which takes in the country's capital Port Vila, as relief workers assess the damage left behind by Tropical Cyclone Pam. The cyclone tore through the South Pacific archipelago packing winds of up to 270 kilometres per hour, killing at least ten people across the country's 65 inhabited islands according to aid agencies. Save the Children's country director Tom Skirrow, citing figures from Vanuatu's National Disaster Management Office, told Reuters news agency yesterday that eight people had been killed and 20 injured. The Australian Red Cross said that at least two other people had been killed on Tanna Island, 100 kilometres south of Port Vila. With communications down and many areas still inaccessible, relief workers fear the death toll will be much higher. Vanuatu lands minister Ralph Regenvanu said he expected other provinces would be declared to be in a state of emergency once authorities had a better picture of the situation. "A state of emergency has been declared for Shefa province," he told the ABC. "We have no communications with the rest of the country. As soon as we do assessments in other places, it looks like we will be declaring other provinces as well." Mr Regenvanu said a curfew was also going to be declared due to "low-level looting". World Vision spokeswoman Chloe Morrison, who was in Port Vila, said some villages had been "literally picked up and blown away". "Power lines are hanging, buildings are flattened so it is just a devastating sight," she said. But as relief workers fan out to cover areas of the north and south flattened by the worst cyclone to hit the area in decades, they expect an even grimmer picture to emerge. "Aid is on the way, but these critical hours immediately after the emergency when people may have survived, but may not have anything to survive on, that's [when] we really need to get out there," United Nations relief agency head Sune Gudnitz said. Islands in the north and south took a direct hit from the storm and it is in these areas where it is feared the death toll will be much higher. "There's not a lot of information [about] the islands in the north and the south, particularly in the south, the southern islands of Vanuatu where we have grave concerns for people's welfare," Care International's Vanuatu program director Inga Mephum told the ABC from Port Vila. The outer islands which generally do not have good healthcare facilities will be in particular need of assistance, Care International's Vanuatu program manager Charlie Damon said. "Over the coming days we will get an idea around the injuries and we can gauge what the issues will be on the outer islands," Ms Damon said. Aid teams from around the world have begun to arrive in Vanuatu as the cyclone moves south-east toward New Zealand. Australia announces $5 million aid package Foreign Minister particularly to the Red Cross and UN agencies. "We will be sending military transport planes, and [begin] the deployment of personnel â€” medical, humanitarian and consular, natural disaster experts and supplies," she said. "We will also be deploying humanitarian suppliers to provide support for up to 5,000 people in the form of water, sanitation and shelter. "We are also deploying a team from Australia of medical experts and urban search and rescue personnel." Ms Bishop said two military aircraft had been sent to Port Vila. "We are assessing the damage and destruction across the Pacific caused by the devastating impact of Tropical Cyclone Pam and our thoughts are with our friends in the Pacific," she said. Save The Children said it had aid workers on board the C-17 that left from Amberley air base, west of Brisbane in Queensland, along with others from Oxfam and Care Australia. Australian Red Cross spokesman Peter Walton said Australian aid workers would be deployed today if weather permitted. Aid agencies have estimated that at least 10,000 people have been left homeless, but authorities are struggling to gauge the extent of the damage across the country as communications remain down. Ms Bishop said the Government was doing all it could to confirm the well-being of all Australians living in Vanuatu. 'It's like a bomb has gone off in the centre of the town' Tropical Cyclone Pam could be one of the worst natural disasters in the history of the Pacific, according to the United Nations. "There's some communications to Port Villa but they are on and off but to the outer islands it's very difficult and there's virtually no communications at this time," former Oxfam Vanuatu country director Alex Mathieson said. Thousands of people are in temporary shelters, while many others are wandering the streets of the capital. Alice Clements, a spokeswoman for the UN Children's Fund (UNICEF) in Port Vila, said the damage was likely to be great. "It felt like the world was going to end. It's like a bomb has gone off in the centre of the town. There is no power. There is no water," she said. "We are hearing unconfirmed reports of casualties and lots of wounded. People are asking for help." Vanuatu's at a UN disaster conference in Japan. "I'm speaking with you today with a heart that is so heavy," he said. "I stand to appeal on behalf of the government and people of Vanuatu to the global community, to give a lending hand." Save The Children's Tom Skirrow said his organisation had been helping to set up the now packed evacuation centres "Particularly in the poorer areas, entire communities have been levelled," he said. "The big challenge now is are we going to be able to support those people in those evacuation centres."