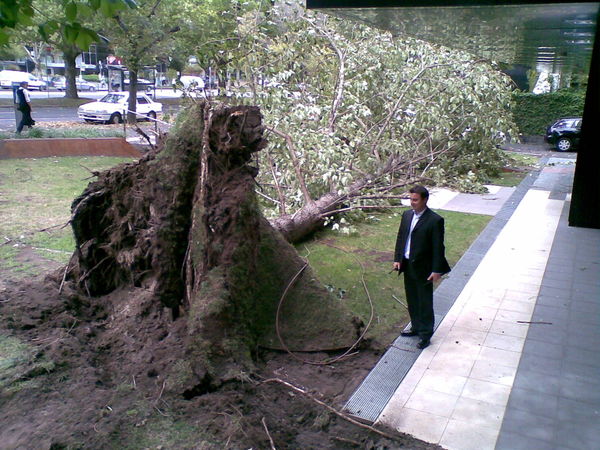 Image: User submitted. Source: ABC
Severe weather has battered western Victoria and the strong winds are heading for Melbourne. The State Emergency Service (SES) has responded to more than 1200 calls for help, mainly in the western district. SES spokesman Shane Reeves says damage has been particularly bad around Warrnambool. "The Mobil service station there, their large sign has broken up and flailing about, Port Fairy a house has lost it's roof and a number of tree jobs," he said. Victoria Police Acting Sergeant Darren Ferluga says the wind has also brought down trees along the Wimmera Highway. "I've been speaking to the guys from the Council. They've been absolutely flat out getting trees off roads. One of the Council utes was actually hit by a tree as it came down," he said. Power companies are also reporting problems with supply in the state's southwest. About 2,000 properties in Melbourne's inner north and east are also without power. In Melbourne, the speed limit on the Westgate Bridge has been reduced to 40 kilometres an hour and caravans and motorcycles are being advised to find an alternative route. Police say the Westgate and the Bolte bridges are likely to close because of the high winds and people working in the city should consider leaving work early. The Westgate has been reduced to two lanes and the elevated section of Citylink between Flemington road and the Westgate has been closed in both directions. Flemington Road outside the Royal Children's Hospital is blocked to city-bound traffic and trams after a tree came down. In Melbourne's eastern suburbs, there was a lucky escape for two women when a large tree branch fell on their car in Melbourne's east. Paramedic, Therese Pezzimenti, says the driver managed to slow down before the tree came down. "The trunk of the tree has hit the bonnet and the windscreen. Another metre and it could have fallen and come straight through the windscreen on to the driver and the passenger," she said. The bad weather has also forced the closure of Melbourne's Flower and Garden Show after a man was hit on the head by a falling tree branch. Melbourne Airport is also on alert. Spokesman Tom Perry, says the strongest winds are still to come. "The key piece of advice however for passengers, is to take their time on the Tullamarine Freeway, and to allow a bit of extra time in getting to the airport, because we do anticipate there will be some delays later this afternoon."