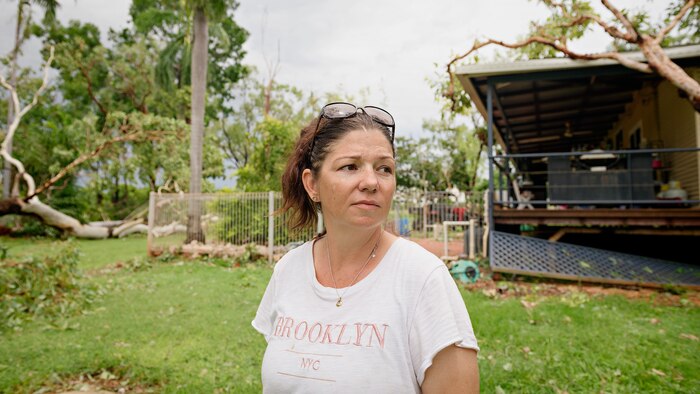 Source: ABC
Locals across the southern part of the Top End are assessing the damage left by days of severe weather in the region. Donna Donzow and her family were asleep in the early hours of Wednesday morning when a large storm swept through the area where they live near Katherine. "We were woken up by intense lightning and thunder," she said. "It just sounded like someone had opened gunfire on our house ? it was getting peppered with trees and debris and you name it, everything was flying around." Days after the storm, the damage on Ms Donzow's property is still evident, with dozens of trees uprooted and displaced ? including one that fell on the bathroom of her family home. She said she was also dealing with a smashed car windscreen and her property had incurred about $50,000 worth of damage from the fallen trees alone. Ms Donzow was just relieved her family and animals got out unscathed. "Thankfully no one was hurt in this," she said. "We're getting there. It's been tiring, but we'll get there." Similar stories are emerging across some parts of the Top End in the wake of ex-Tropical Cyclone Tiffany, which crossed the western coast of the Gulf of Carpentaria as a category 1 system at lunchtime on Wednesday. As the system continued to track inward, the Bureau of Meteorology NT warned it could create flooding, damaging winds and heavy rainfall of up to 200 millimetres in some areas close to the system. Numerous catchments across the Katherine region received more than 100 millimetres in the 24 hours to Thursday morning. However, authorities say the system travelled across the NT and towards the Kimberley region faster than expected, meaning there was less time for sustained rainfall to fill river systems. Some minor flood warnings remain in place but authorities say the Katherine township will not be affected by rising river levels. At a property near Ms Donzow's in a rural area south-east of the town, Jessica Di Pasquale was surveying the damage from the recent weather, including a tall mahogany tree sprawled across the 40-acre property. "It made a pretty big mess," she said. "That tree behind us was one of the original mahoganies that we planted when we first moved here. It's got a bit of age on it and obviously a bit of size." The Di Pasquales have lived at their property since 1998, just before historic flooding in Katherine. She said this week's weather was "fairly sedate" compared to those flood levels, but trees had fallen around her property and a shed was obliterated before becoming airborne. "Goat pens have been upturned and it's pretty messy," she said. "We spent all day yesterday with a few friends who had come around to cut trees out of fences and pile them up." But the heavy rainfall has been welcome news for some. Chris Duffy manages a large hay farm in Katherine that he said had received more than 150 millimetres of rain in the past few days. While his property lost a few trees, he said the extra rainfall had helped his crops. "There were some crops that were really looking for a drink," he said. "It's really come at a good time." Emergency services are continuing to track the movement of the ex-cyclone as it moves west and say they can stand up an emergency response at short notice if required.