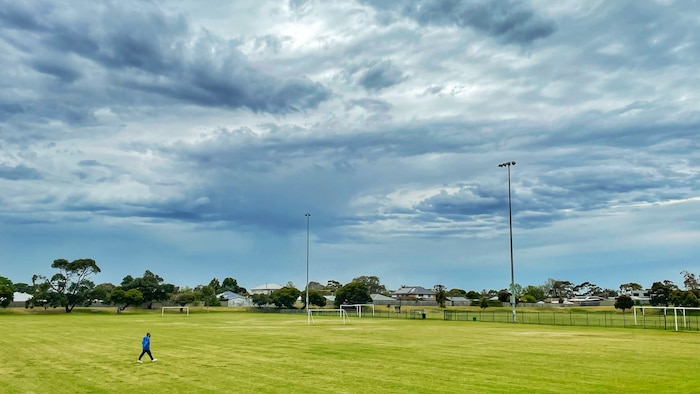 Source: ABC
The Victorian State Emergency Service is responding to hundreds of calls for help after storms battered the state last night, with more wild weather on the way.   A severe weather warning for damaging winds remains in place for the southern half of the state, with wind gusts exceeding 100 kilometres per hour in many areas. Tens of thousands of properties are without power across the state. The weather bureau's Michael Laczko said the wild weather was expected to continue until late morning or midday. "Winds are increasing this morning and we're expecting damaging wind gusts to be a risk all through southern Victoria and all through the ranges and elevated areas today," he said. "The highest risk in the Melbourne area looks to be from about 7 or 8am for a few hours until about 10 or 11am." Yesterday there were 370,000 lightning strikes across Victoria, south-east New South Wales and South Australia, the weather bureau said. A PowerCor spokesperson said crews were out on site working to restore power to thousands of homes. Helen Hobbs is a Kaniva resident who says she got stuck in the supermarket when the power went out. "There was quite a lot of lightning with it, but we haven't heard of much storm damage that's happened," she said. "I was in town at the time and just about to grab some groceries and, of course, you can't transact when the power goes down." The town of Nhill in the Wimmera recorded 7 millimetres of rain in just 90 minutes.  PowerCor also reported a large amount of lightning in the area with the towns of Rainbow, Jeparit, Sea Lake and Dimboola the most heavily affected by the power outages.  A spokeswoman has urged people further east to prepare for more outages by charging their phones and keeping away from fallen powerlines. High pollen levels and strong winds are creating a high risk of a thunderstorm asthma event. Thunderstorm asthma is triggered by a combination of grass pollen in the air and certain thunderstorm conditions. It usually affects people in the windy period before rain starts.  Ten people died when extreme pollen levels and storms developed over Melbourne in 2016. Victoria's health department had advised people to stay inside when storms develop. Deputy Chief Health Officer Angie Bone warned anyone with asthma to be on alert. "What happens is that the combination of extreme grass pollen levels with these thunderstorms put this risk out there," she said. "And it will happen quite quickly if something is going to happen, and last through the hours after the thunderstorms have gone through that area. "Obviously we are concerned because of the events of 2016 that many people will remember, where there was a very significant event, and we're very much hoping that's not going to happen but we need to be prepared." Hospitals already under pressure Victoria's Acting Chief Health Officer Ben Cowie reinforced the need to take the thunderstorm asthma warning seriously today, saying hospitals were already under strain from the pandemic. He said additional capacity and plans had been put in place. "It's important to avoid being outdoors during a storm or high winds," he said. "Take your preventative medications as directed and carry your puffer or your reliever with you today if you do have asthma." Asthma Australia CEO Michelle Goldman said it was not just people with asthma who needed to be careful. Many people experienced asthma symptoms for the first time during the 2016 Melbourne thunderstorm event. "It's not just people with asthma who we encourage to be vigilant over this time, it's also the one in five people who have hay fever," Ms Goldman said. "Where pollen usually sits in the upper airways and causes the miserable symptoms that you have when you have hay fever, it's now travelling to your lower respiratory system where it can cause asthma." Thunderstorm asthma is a well-documented phenomenon in south-eastern Australia. Wagga Wagga, Newcastle and Canberra have all had events in the past. After Melbourne's November 2016 event, which caught the community off-guard, a world-first alert system was launched in Victoria to prevent a repeat of the disaster.  The system takes into account weather conditions, hospital presentations and pollen levels, with the aid of five new pollen monitoring sites. A website and app provide forecasts, information and alerts about potential thunderstorm asthma conditions. "The community is definitely much more prepared now than they were then for that event which was unprecedented in its scale," Ms Goldman said.  "Not only is the health care system more prepared, but I think the community are more aware if they do experience symptoms of what it could be."