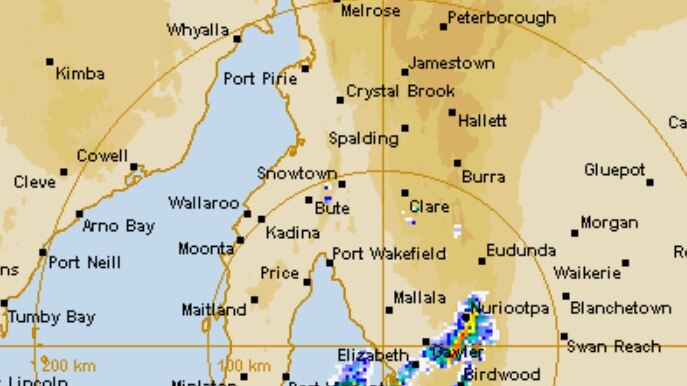 Source: ABC
A second wave of thunderstorms knocked out power to thousands more homes across South Australia on Thursday night ? and even forced the brief evacuation of the weather bureau's Adelaide office. Lightning, giant hail and heavy rains lashed parts of South Australia for most of Thursday, causing flash flooding and widespread damage. The State Emergency Service is still responding to more than 1,200 calls for help, including more than 750 from around Salisbury, in Adelaide's north. SES state duty officer Brenton Clarke said crews were regrouping before heading out again this morning. "It's been a massive day," Mr Clarke said. "I mean, well over 1,200 requests for assistance in that period, and the number of requests that came in in such a short time and the type of incident? "We've had up to 200 volunteers and between 40 and 50 vehicles out on the road trying to attend to these requests." Birdwood and Salisbury high schools are closed because of storm damage, along with Lake Windemere B-7 School in Salisbury North. Power lost after evening surge Thousands of homes and businesses were left without power ? but that number surged to more than 30,000 after another burst of gale-force winds and storm activity hit Adelaide about 7pm. "That incredible storm that came through the city here ? that was really amazing and I'm not surprised we're getting a lot of calls from people," SA Power Networks spokesman Paul Roberts said. The number of blacked-out properties hit 30,000 on Thursday night. It has fallen to about 12,000 on Friday morning. Mr Roberts said that outages were being reported not only across Adelaide's CBD, but from Eyre Peninsula in the west to the Riverland in the east. He said crews would be working throughout the night. "We had both 70,000 lightning strikes in the more early part of the day and then, later on, severe winds," he said. Bureau of Meteorology (BOM) senior forecaster Brett Gage told ABC Radio Adelaide that it had "been a madhouse today". "Probably the most widespread damage in the metropolitan area has occurred in the last hour," he said. "In Adelaide we had a westerly change right about 6pm on the coast. There were strong westerly winds and then about an hour later they increased to gale force." The highest recorded wind speed on Thursday was 124 kilometres per hour near Loxton. Mr Gage said a low pressure system had resulted in "pretty much horizontal rain" in Adelaide's CBD, forcing the brief evacuation of the BOM's main SA office on King William Street. "I had to evacuate the building here for 10 minutes because the rain got into some system up on top of the building," he said. "It was blowing that hard, and set off the fire alarms. "Luckily the [Metropolitan Fire Service] were very prompt." A severe weather warning for damaging winds was cancelled overnight. BOM senior meteorologist Tina Donaldson said the weather would be milder on Friday, with some showers still. "[It will be] a much calmer day today ? and conditions [will] continuing to ease over the weekend," she said. Damage to fruit crops expected Adelaide Hills fruit growers are assessing the damage. Huge hailstones hammered Adelaide northern suburbs, the hills and the Barossa Valley. Fruit Producers SA chief executive Jose Gil said growers who did not have protective netting over their crops had been hit the hardest. "The cherries are pretty well close to being picked. That's normally due in November," Mr Gil said. "If it's been damaged, only time will tell whether it will recover. "In regards to apples and pears, they have been damaged if they haven't got any netting in place." Tenafeate Creek Wines owner Larry Costa said grapes on his property at One Tree Hill were badly damaged and it would take up to two weeks to assess the bruising they suffered. "At this stage of the game, they?re basically pretty well stripped pretty badly," Mr Costa said. Greenhouse, market garden and hydroponic crops to Adelaide's north were also damaged. Tomato, lettuce and zucchini crops were among those affected. "There?s a lot of devastated growers here at the markets this morning," South Australian Produce Market marketing manager Penny Reidy said.