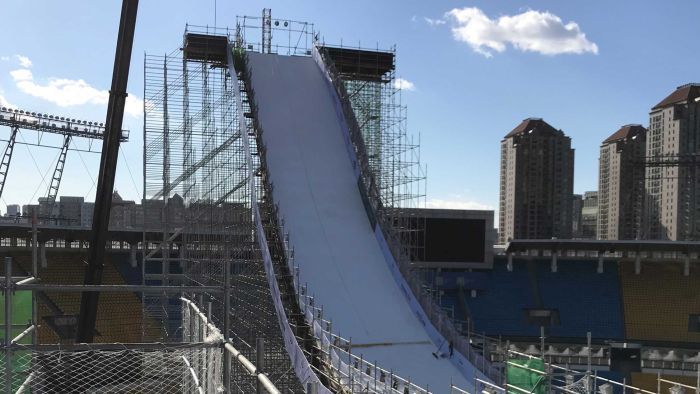 Source: ABC licensed
When you think of a white winter, Sydney is not the first city that comes to mind. But this August, the Domain will be transformed into a hub for the world's best skiers and snowboarders, who will compete in a new competition. They will be flying down a snow-covered, 16-storey-high ski ramp next to the CBD. Big air snowboarding is a winter sport in which athletes set off down a giant launch ramp before soaring into the air, going much higher and further than those taking part in traditional slopestyle snowboarding. A Big air ramp can be built anywhere, meaning cities like Sydney can be used as winter stadiums. Similar events have already been held in Beijing and Los Angeles. The "air and style" competition is the brainchild of two-time Olympic gold medallist Shaun White. "I am so excited that air and style is coming to Sydney," he said. "I love this city. We are going to bring the mountain to the city and take over the Domain." Australian winter olympian Russ Henshaw said he was stoked to have the event in his backyard. "I'm really excited. I've always thought it would be awesome to have a city big air in Sydney," he said. "I'm really looking forward to family and friends being able to see what I do in person rather than showing a YouTube clip to them. "It's pretty crazy to think that in a few weeks' time The best skiers and snowboarders will be competing in a big air in the middle of Sydney." The competition will boast many more winter olympians, including PyeongChang slopestyle snowboard gold medallist Redmond Gerard from the USA and gold slopestyle ski medallist Oystein Braaten from Norway. The tower will take two weeks to build â€” with construction to start in late July and competition to be held from August 3 to 5.
Note to media: You are welcome to republish text from the above news article as direct quotes from Weatherzone. When doing so, please reference www.weatherzone.com.au in the credit.