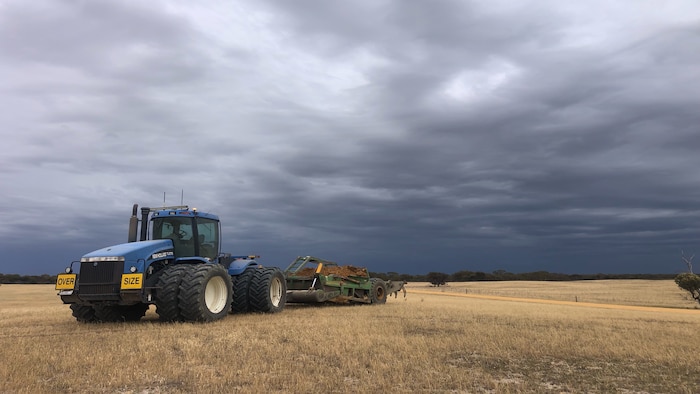 Source: ABC
A complex low, front and extended trough will continue to bring thunderstorms to northern New South Wales and southern Queensland, after South Australia, Tasmania and Victoria got a battering throughout Friday.  Bureau of Meteorology senior forecaster Jackson Browne said the main band of potentially damaging storms would stretch from Newcastle to Charleville on Friday. The odd severe storm could also crop up all the way to Darwin, he said. The bureau this afternoon issued severe thunderstorm warnings, including damaging winds, large hail and heavy rain, for southern Queensland's Central West, Channel Country and Maranoa and Warrego districts. The same warning was issued for much of north-east NSW, including North West Slopes and Plains and parts of Mid North Coast, Hunter and Northern Tablelands. It has been a wild few days of weather, with everything from severe fire danger, dust storms and land gales to flood warnings.  "The most dynamic features are really the severe thunderstorm warnings, which have been popping up sort of like a bit of a whack-a-mole situation, with warnings popping in and out of existence as these storms live and die," Mr Browne said.  The cold front that brought hail to South Australia yesterday deepened during the day and delivered more storms to the south-east.  The rain has exacerbated flood conditions in Tasmania where rivers are rising with further rain, hail and sleet forecast for Friday night and Saturday. On Friday evening, a major flood was declared at Lake River at Parknook, south-west of Launceston and the water is still rising. While moderate flooding is likely on the Jordan River at Mauriceton and along the River Ouse, north of Hobart. "There may be some periods of heavy rainfall over the Tanami Desert during the weekend and that will exacerbate previous road damage," Mr Browne said. But not all of the north will be wet, as severe heatwave conditions are developing over Cape York Peninsula. At least southern Western Australia is getting a reprieve, having dealt with the front earlier in the week.  Victoria wakes to trees down and power out  Thousands were also left without power in Victoria as the storms and heavy rainfall continued last night. The highest gust recorded so far was 145 kilometres per hour at Mt William at 3:41am, while parts of Melbourne had their strongest October winds in at least a decade.  Damaging wind warnings have now retreated to the south-east of the state and the worst of the wild weather is expected to move off by this afternoon.   Crops battered by 'bow echo' storms A series of storm fronts battered South Australia on Thursday morning, with reports of large and giant hail. Eight schools were closed due to power outages and flooding.  For those watching on radar, the storms had an impressive curved shape that meteorologists described as "bow echo" storms.  "For meteorologists and severe weather forecasters, it's a clear sign that it's showing severity because you're getting winds, which are usually well above the surface and quite quick, coming down through the thunderstorm to create damaging winds at the surface," Mr Browne said.  Farmers are counting the damage.  Ungarra farmer David Liddicoat was driving near Port Neill when hail blanketed the area. "I've got hail stones here the size of marbles; this is unreal, unbelievable," he said. "The road is completely covered with ice, the road's just white and the paddocks are just white. "I would say there would be a lot of crop damage. There wouldn't be too much that would survive that." Over the coming days The bulk of the wild weather affecting southern New South Wales, Victoria and South Australia was expected to pass by around lunchtime on Friday. Storms will continue for northern New South Wales and southern Queensland before the trough bounces up into Queensland during Saturday, bringing the risk of storms to Brisbane.  "By Sunday we should see a cessation of most of the severe activity around eastern Australia," Mr Browne said. Keep up with the warnings with ABC Emergency.