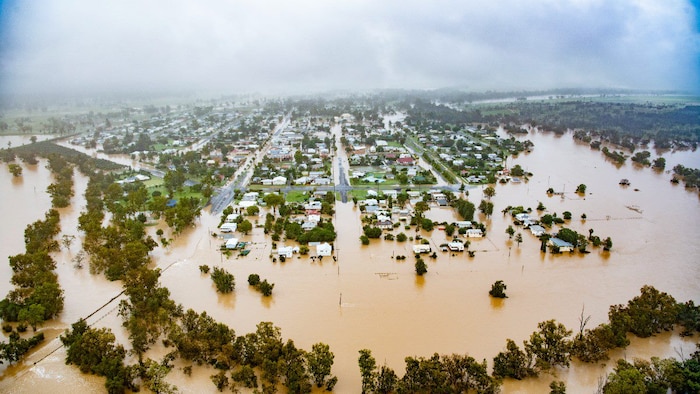 Source: ABC
Hundreds of residents in southern Queensland remain on high alert as a major clean-up begins in the border town of Inglewood where evacuated residents have now returned. Floodwaters that inundated Inglewood have now headed downstream, increasing the threat posed to the southern towns of Yelarbon, Goondiwindi and Warwick. Major flood warnings remain in place for the Dawson River, the Condamine and Balonne Rivers, the Macintyre and Dumaresq Rivers and the Warrego River. Evacuated Inglewood residents were who were taken to the local cemetery on Tuesday night were allowed to return home yesterday as the floodwaters receded. State Emergency Services (SES) regional manager Bob Bundy said it will be a priority to restock the town with petrol and food "so the community can go back to some level of normality". He said additional crews arrived today and will be expected tomorrow to help with the recovery effort. "Most of the businesses got affected too, which means you can't buy food or petrol in Inglewood, that's a priority to get that up and running," he said. "We're sending a lot of cleaning equipment and air blowers, that sort of thing to help out," he said. QFES crews have been conducting damage assessments and checking the safety of electrical systems. A disaster recovery hub will be opened at the Macintrye Centre to help residents will the clean-up, with authorities expected to know later today how many homes were inundated. The town of Yelarbon on the southern border escaped inundation overnight, but floodwaters peaked in Texas and Warwick, with more rain forecast next week. Threat moves to Goondiwindi QFES Commissioner Greg Leach said officials were keeping a firm eye on the Macintyre River, which is already at the 10m mark. "Today the focus turns to Goondiwindi, the local disaster management group there are watching the river levels rising very carefully, the trigger for evacuations around Goondiwindi is if the river hits 10.8 metres, so we'll be watching that closely today." Bureau of Meteorologist (BOM) hydrologist Andrew Preece said the Dumaresq River at Texas peaked early this morning without damaging properties. The Macintyre River at Goondiwindi is due to peak late Friday, at a level just higher than the 2011 flood peak, BOM warned. It is forecast to reach 10.7m but Premier Annastacia Palaszczuk said it was not expected to break its levee. Queensland Fire and Emergency Services (QFES) Commissioner Greg Leach said evacuations could begin when the river reaches above 10.8 metres. The river is currently at 8.85m. With more rain predicted for the region next week Mr Leach warned the full ramifications of the recent weather are yet to be seen. "Many communities are going to be dealing with this for days to come yet," he said. "It's not going to take much rain or thunderstorm activity to bring river levels up again next week." Meanwhile, the levee bank around the town of Yelarbon has protected it from any major flooding. Nearly 50 residents were evacuated from the town yesterday as a precaution but there have been no signs of any major inundation in the town this morning. Goondiwindi Mayor Lawrence Springborg said authorities are waiting for floodwaters to pass through Yelarbon before deciding when residents can return home. "It won't be possible to bring those people back by road today so they'll have to just sit it out a little while longer," he said. Hundreds of roads across Queensland cut, emergency crews called out The Department of Transport and Main Roads said hundreds of roads across the state have been closed by floodwaters. QFES state coordinator Rob Boniwell said the service received over 300 calls for help and did six rescues in the 24 hours to Thursday morning. He said it was "a busy night in the south-western region", but that QFES and SES are now moving into the "recovery stage". Commissioner Leech urged people not to enter floodwaters in any circumstances. "A modern motor vehicle can float in as little as 15 centimetres of swift moving water," he said. "You might think that your vehicle can get through but you can't. "I think it's inexcusable that people continue to drive into floodwaters putting not only themselves but first responders' lives at risk. BOM says rain easing, flooded areas spared for now BOM forecaster Pieter Claassen said there may be the "odd storm" throughout the inland parts of the state, but "nothing like we've seen in the past few days". The heaviest rain to fall last night was in Caloundra, where Sugarbag Road saw 134 millimetres. Mr Claassen said the worst of the weather fell outside of areas experiencing flooding. While there was a rare "drizzle" about the south-east this morning, Mr Claassen said there will be "plenty more blue sky around" later this morning. The BOM expected the wet weather to return briefly on Sunday before clearing until mid-next week.   It has been the wettest November some areas have seen in more than 100 years and the days-long deluge has left the ground sodden. BOM forecaster Harry Clark said people in affected areas should not expect floodwaters to subside quickly and that even scattered showers could cause further flooding, particularly in the border region. A 73-year-old man yesterday become the second person to die in Queensland floodwaters in the past week after his ute was washed off the road yesterday near Toowoomba. Three people were rescued near Dalby after clinging to a tree in floodwaters for three hours yesterday. Rain enough to avoid water restrictions Ms Palaszczuk said that, even with the rain, many areas remain in drought. In south-east Queensland, there has only been a small increase in water storage levels, which remain close to their lowest level since the drought. Ms Palaszczuk said the water grid was at 59.5 per cent capacity, despite a 4 per cent rise in the past week. "This means ? we are unlikely to face water restrictions in south-east Queensland this summer," Ms Palaszczuk told parliament this morning. "That's a welcome relief."