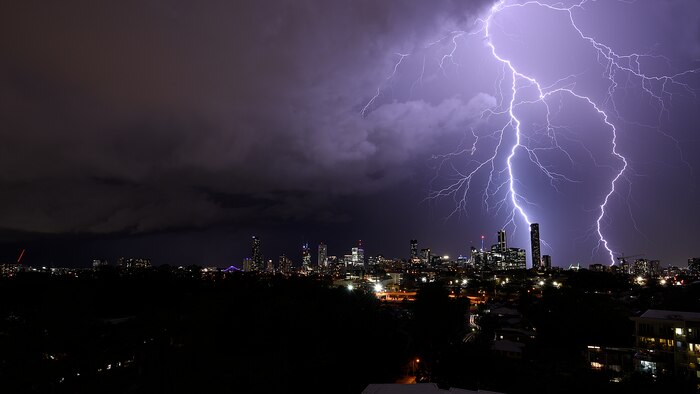 Source: ABC
More storms are forecast for the southern half of Queensland today as the annual severe storm season continues to wreak havoc around the state. The Bureau of Meteorology (BOM) is expecting most of the activity to hit in the afternoon, largely in similar locations to yesterday. Severe storms brought hail, torrential rain, gusts up to 120 kilometres per hour, and reports of small tornadoes to the Mackay region yesterday afternoon. In separate cells last night, small hail fell in parts of Brisbane, with the capital recording up to 33 millimetres.  Danny Donald from Ergon Energy said there were tens of thousands of lightning strikes in the south-east. "Although there were nearly 50,000 lightning strikes last night, the network held up really well an at the height there were around 1500 customers without supply but everyone was restored that evening," he said. BOM forecaster Shane Kennedy said severe storms were likely "all through eastern and south-eastern Queensland, extending that risk of severe thunderstorms from Ayr south to the New South Wales border". He said the storms would remain mostly coastal once again, not extending west of Toowoomba in the south-east. Northern regions of Queensland will miss out on the severe storms but will not be without rain. "Across the rest of the state, we are likely to see showers and storms begin to expand across the north and north-west, extending across the Cape York Peninsula and into the north-west around Mount Isa," Mr Kennedy said. That will come as a relief in Mount Isa, where temperatures rose to a scorching 41.3 degrees Celsius yesterday. Likewise, in Mareeba in the state's far north, where temperatures reached 36.7C. It was Mareeba's hottest day of the year so far and the hottest October day since 2018. Mr Kennedy said that the "low-to-severe intensity heat wave" should begin to ease over the next couple of days. Today's weather activity would look pale in comparison to the storms experienced throughout the central coast region yesterday afternoon, an incident Mr Kennedy said would likely remain an outlier. Hail of various sizes pummelled the region and, in some places, coated the ground in a snow-like fashion. Clean up after Mackay storm More than 120,000 lightning strikes were recorded in the Mackay area and nearly 10,000 homes were left without power due to winds reaching speeds of more than 120 kilometres per hour. Those storms also downed power lines and damaged small aircraft left unsecured at the Mackay airport. Similar to storms earlier in the week, rain was localised but intense. Biloela, in the state's central region, received 23 millimetres in just 15 minutes of downpour, with giant hail also reported. To the south, slow-moving thunderstorms delivered slightly more consistent rainfall for the Scenic Rim, dropping 40 millimetres of rain in one hour at Mount Alford, near Boonah. Mr Kennedy said those storms were "not quite at the severe threshold, but certainly quite an amount of rain".