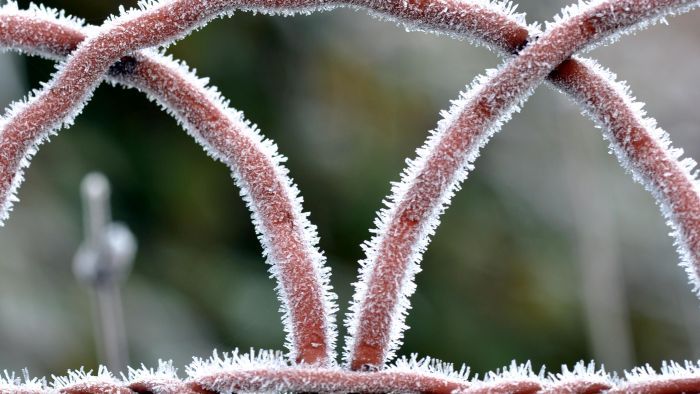 Source: Audience submitted
Widespread, severe frosts across South-East Australia are having an unprecedented effect on grain crops. It's not uncommon to grain growers to get frosts during winter in the region, but the severity of the frosts and the subsequent damage have surprised many. Ten consecutive days of frost in recent weeks around the central west has caused some crop damage especially in those sown early. But exactly how severe that is won't be known until harvest. Parkes -based agronomist Peter Yelland says that while the damage done won't be as bad as further south, there will be a loss in yields. "Hopefully it's minimal, the crop stages around the central west at the moment, the cereals are well and truly still in the vegetative phase. "Your pulse and canola crops would be at the highest risk. "Anecdotally it looks like there's been some pulses affected by frost damage," he says. But Mr Yelland says that those with an early sowing date are the most frost-affected. Senior researcher at the CSIRO's agriculture flagship, James Hunt, says it's hard to assess the damage of such an unusual event. "Yeah, a lot of people are just checking crops now and finding things that don't seem quite right and trying to work out what it all means. "We're looking to other regions like the Darling Downs in Queensland that get these events more regularly to work out what the implications might be." Some Victorian lupin growers are worried that patches of their crops have been destroyed. Mallee agronomist Andrew McMayne says it's too early tell definitively how much damage has been done, but it looks widespread. "I'd say just due to the extreme temperatures we received at the start of last week, with four days being minus three, minus four, all in a row, I'd say most lupin crops have got some level of frost effect at the moment." The frost damage has also been quite widespread throughout NSW this year. Experts estimate between 20 to 30 per cent of the states cropping regions have been hit. Rowan Brill a research and development agronomist from the Department of Primary Industries, based in Wagga, said everyone was caught by surprise. "But it is very hard to tell how widespread the damage is or how much of the crop has been wiped out. "And the reason the damage is turning out to be so common is the way large areas were hit with record low temperatures. "Overnight lows in a number of regions saw temperatures so low we would only see them once in one hundred years. "Places like Hillston, and other areas in the Southern Riverina and the Western Riverina saw very frosty conditions. "Some areas in the Central West appear to also have been frost affected. "The canola, wheat, and lupin crops have been badly hit," he said. The damage bill won't be known until harvest but it could run into the hundreds of millions of dollars.
Note to media: You are welcome to republish text from the above news article as direct quotes from Weatherzone. When doing so, please reference www.weatherzone.com.au in the credit.