Riverina growers struggle to find a home for rain-impacted canola 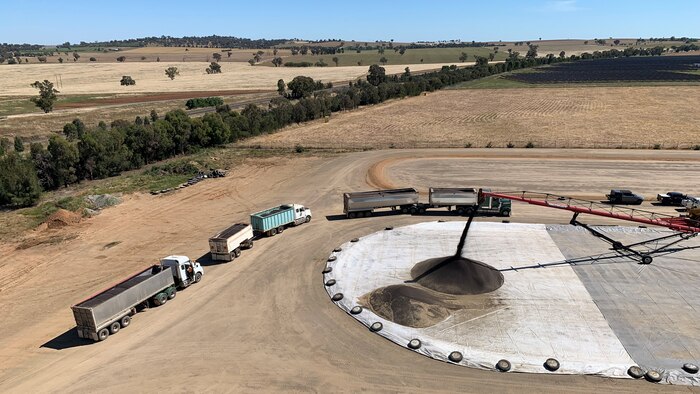 Source: ABC
Riverina growers have been scrambling to find a home for their crop after GrainCorp shut the gate to downgraded canola following damaging rains. Southern NSW farmers were informed earlier this week that the grain receival giant GrainCorp would no longer be taking low test weight canola, known as CNTW, at their sites. It came after up to 150 millimetres of rain fell in the region last week. GrainCorp's Sean Barker said they had made the decision to protect the integrity of their canola stacks.  ?Over the last 24 hours we?ve been working hard to find solutions for growers," Mr Barker said. ?We told growers this morning that we?re now able to take specific low test weight segregations at Bribbaree, Ardlethan, Cunningar and Milbrulong receival sites.?We?re now assessing additional sites that we hope will provide more options for growers, based on the volume and quality of what we see this week. "Pricing and market options for this product are also being investigated.? Roy Hamilton, who farms at Rand north west of Albury, said there was still around 80 per cent of the canola crop left to harvest in his region.  "I'm hoping common sense prevails," Mr Hamilton said.  "I think growers are under enough stress without people closing the door on them. "The market in the past has always sorted this out, hopefully that happens sooner or later before the harvesters get going (again)." From bumper crops to 'shot and sprung' Growers who were able to harvest their canola before last week's downpour have been rewarded by high yields, good quality and record-breaking prices. But those who were not able to get the crop off in time have found a significant portion has 'shot and sprung,' meaning it was sprouting before the crop was harvested, impacting quality. NSW Farmers Grains Committee chair Justin Everitt said their first priority was finding a solution for where downgraded canola crops would be stored, with few growers having enough on-farm storage to house their entire crop.  "I'm hoping we'll find an avenue for out of spec grain and somewhere to take it, so farmers aren't left with no income," Mr Everitt said.  "Harvest is going on right now and there are people out there under an enormous amount of stress trying to work out what to do with the grain they're currently harvesting." The next problem is finding a market for the downgraded and sprouted crop.  "There's obviously the stock feed market and hopefully they can at least find a way of crushing it and getting some decent oil," Mr Everitt said.  The Riverina's major oil crusher has indicated it will continue to receive downgraded canola, at this stage.  Riverina Oils' commodity manager Lawra Saks said their canola supply had not been affected so far, with most growers dealing with downgrades, not entire crop failures.  "There are discounts in place for canola out of specifications, but we want to support our local growers," Ms Saks said.  Riverina Oils said it will accept up to five per cent shot and sprung crop, and said anything more would be assessed on a case by case basis.  "We're running it through our crush at the moment to see how it affects our oil yield and oil production, because this is quite an unusual year. "I think a lot of growers are feeling quite worried...we've had our phones running off the hook for the last couple of days." Ms Saks said Riverina Oils works with close to 400 growers in the region and estimated only 10 per cent of the crop was harvested before the rain.  "The rain last week wasn't so bad until we got to Friday, and then it was just so heavy, I think that's what did the damage."