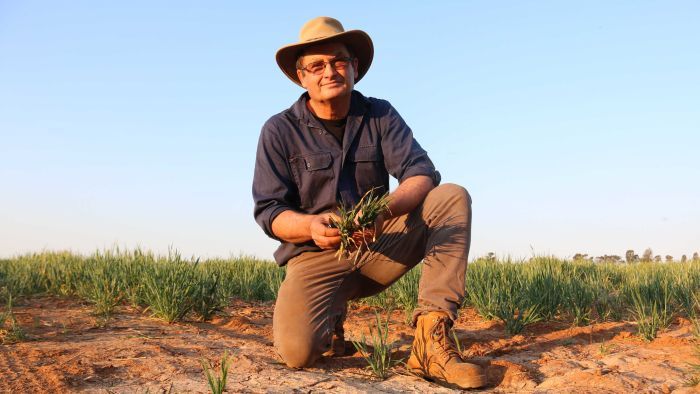 Source: ABC
Farmer Neil Westcott is looking out over his 2,000-acre field of barley, dreading what may come. The grain could be worth half a million dollars, he says, but instead Mr Westcott will be forced to destroy the lot, including his wheat and canola crops, if it does not rain in the next week. "We'll lose well over a million dollars in this event," he says, standing in the middle of the parched field. "Yeah, it's significant. "There'll be a lot of farming families here and north doing some soul searching over the next few months." The Parkes farmer is like many in the central-west region of New South Wales who have been delivered a The Bureau of Meteorology said Parkes had its lowest ever rainfall on record this winter, and that rings true with the farmers who have lived on this land their whole lives. "Generally this crop would be up to my knees," Mr Westcott says, walking through the dry, foot-high plants. Set to be a 'pretty lean Christmas' It is the same story with his canola and wheat, which he hopes could still be salvaged if the skies open up in the next week. "I think the rain will stop it at this point, but we're pretty much resigned to a pretty lean Christmas this year." But he is not too hopeful about a late bout of rain and besides, he adds, for many crops "we've gone past a bit of a tipping point this week". The tough weather conditions mean crop production is forecast to drop 40 per cent this year. Parkes Mayor and canola grower Ken Keith has already been forced to mow down his field of bright yellow canola flowers, which he will turn to hay to feed his sheep. The frost and dry winter mean most of the plants have not produced enough of the precious seeds from which canola oil is extracted. "All those little pods have been frosted so they're shrivelled like a pea pod that hasn't grown out," he says, holding one of the flower-topped stems. His farm is much smaller and he has animals that can benefit from the ruined crop. Understanding is all farmers want But Mr Wescott is now thinking carefully about his future, with his son soon coming home to take the reins at the family farm. "It's important to me we have a financially stable and interesting business for him to come home to." And what do farmers here want the Government to do? "Nothing," Mr Wescott says, "just understanding" "And I think mental health of a lot of rural folk gets tested. I think if there's an acknowledgement of that in all levels of government that's an important thing." Despite the tough conditions he is optimistic the central-west NSW region will bounce back. "Farmers here are adaptive, nimble. They're cutting-edge farmers."
Note to media: You are welcome to republish text from the above news article as direct quotes from Weatherzone. When doing so, please reference www.weatherzone.com.au in the credit.