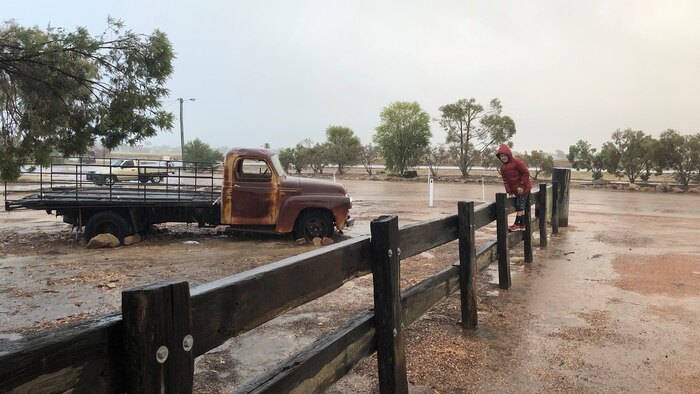 Source: ABC
Queensland's big wet is forecast to stay until December, and while it's welcome for cattle farmers, others in low-lying areas in Central Queensland fled their homes overnight amid flash flooding. The Bureau of Metrology's (BOM) seven-day forecast shows no dry days ahead for Queensland. The rain will peak in the south-east today, as a trough over the central interior moves east, bringing more rain to the coast. BOM forecaster Harry Clark said conditions would become more severe for the capital in the afternoon, with the chance of storms. "If we do get enough heating to make that happen, there is the potential for heavy falls once again," he told ABC Radio Brisbane. "They are most likely forming out in the west and then moving east across towards the coast." Flash flooding in Rubyvale Bundaberg copped 191 millimetres overnight, a potential record for November. To the north, Central Queensland bore the brunt. An average of 150 millimetres in the 48 hours to Friday morning and up to 270mm was recorded near Theresa Creek. Flash flooding hit Rubyvale and nearby Sapphire and Glenn Bell from the Central Highlands Regional Council's Disaster Management group said council was working through how many people self-evacuated overnight. Clive Nesbitt, 67, escaped to a friend's house when the water started coming into his home in the Gemfields. His brother Jim Nesbitt said it was a repeat of the flooding in March. "He lost everything [in March], he lost all his personal belongings, he lost his clothing, he lost pictures of his family, he lost everything, he lost his car," Mr Nesbitt said. "It's taken him up until now to get his life back on track again, and the same thing has happened." Sustained and heavy rainfall has seen the SES receive more than 300 requests for help since Monday morning, with a further risk of flooding over the weekend. No rain reprieve in sight BOM senior meteorologist Laura Boekel said the Sunshine State was set to remain soggy into December. She said the big wet has been the result of a very moist, deep tropical air mass that has been pushed into the state by northerly winds from as far as Indonesia. "It doesn't take much when the air is that moist and then we have these troughs moving through, so because the air is primed and ready to go, it doesn't really take too much to kick off rain and storms," she said. Ms Boekel said a trough over the central interior will move east tomorrow, bringing more rain to the coast, before moving offshore. "It will linger offshore and then look to come back next week, which is unusual, so the reprieve from this rainfall is still over a week away," she said. For cattle farmer, Nina Hensley from Peakvale Station, 60kms south-west of Clermont, the downpour came at just the right time. "It just gives your spirits a complete boost," she said. "Going outside and being able to see green grass and the milking cows skipping about with joy," she said. Rain a 'game changer' after years of drought Ms Hensley tipped 65mm out of the rain gauge on her property yesterday morning. She said it was difficult to get an accurate reading because it kept raining. "This rain means security for the cattle. It means after three fairly ordinary years, we can look at rebuilding the herd," she said. Before the drenching, beef breeder Caitlyn Donaldson, whose property is about four hours west of Rockhampton, was feeding her cattle lick to keep them healthy. "We haven't had a break in the season or spring rain for about 10 years, so this is a bit of a game changer," she said. "We've had 157mm now for November so it's a beautiful start to the wet season and hopefully it continues." Deluge destroys crops But Granite Belt Growers Association president Nathan Baronio said not everyone was celebrating, with the prolonged wet weather hindering certain crops. "We grow strawberries here, which are probably our main line of crops and a third of our production is outdoors," he said. "Everything that is outdoors in terms of ripe fruit, we pretty much have lost." He said cherry farmers and stone fruit growers would also be hurting. "To be honest, I don't think many people would be too happy with how much rain we've had ? it would be really hard if you're in harvest and it'd be extremely tough if you're in the vegetable game," he said.