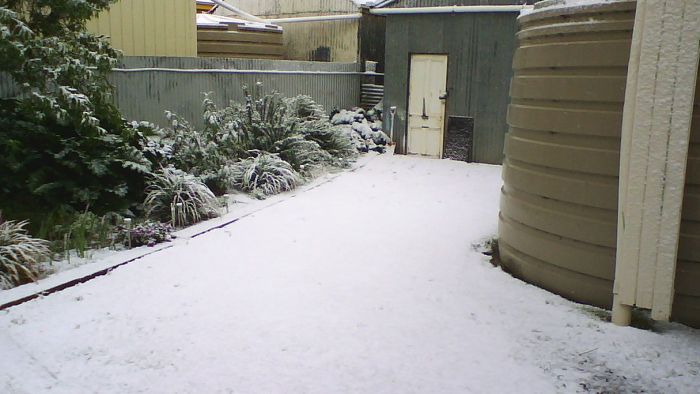 Source: ABC
Rare at any time, there has been October snow across some southern areas of South Australia. The weather bureau in Adelaide said the last reports of snowfall in the Adelaide and neighbouring Mount Lofty Ranges region in October were a century ago. Locals at Hallett in the mid-north of the state, around Crafers, Mount Lofty, Lobethal and Belair in the Adelaide hills, Sevenhill in the Clare Valley and Mount Remarkable in the lower Flinders Ranges have been surprised by snowfalls. Farmers in the agricultural areas have welcomed rainfall that has boosted their crop prospects. Some grain growers say the falls have come too late for them, but crops in later districts will get the benefits. The highest measured falls in the state have included 34mm at Kuitpo in the Mount Lofty Ranges, 27 millimetres at Wilmington in the upper north and 26mm at Melrose. There have been 21mm at Clare in the mid-north, 19mm at Riverton, 17mm at Auburn, 8mm at Lameroo in the Murray Mallee and 11mm at Keith in the south-east. Adelaide has had about 18mm. A maximum wind gust of 91 kilometres per hour was recorded at Edithburg on lower Yorke Peninsula. Emergency volunteers have been called to dozens of incidents since the rough weather first hit Adelaide late on Wednesday. Many of the problems were with fallen trees. At suburban Brighton, a car was crushed when a large shopping centre sign fell in high winds. Raelene Zanker, from Booleroo Centre, said she had lived in the region for half a century and not seen snow so late in the season. "Going back I think it was in the '70s some time we had lots and lots of snow, but we haven't had anything like that for years now and we've never seen snow in October before, well not since I've been here anyway," she said. The October freeze saw Mount Lofty's minimum temperature hit 0.4 degrees Celsius this morning. It got as low at 0.6 at Naracoorte and 1.1 at Mount Crawford. Senior forecaster Tom Boeck confirmed the rarity of the weather conditions. "In springtime we do get some quite significant shifts in the weather in terms of temperature, but I must admit it's quite unusual to be getting a snow event in October," he said.
Note to media: You are welcome to republish text from the above news article as direct quotes from Weatherzone. When doing so, please reference www.weatherzone.com.au in the credit.