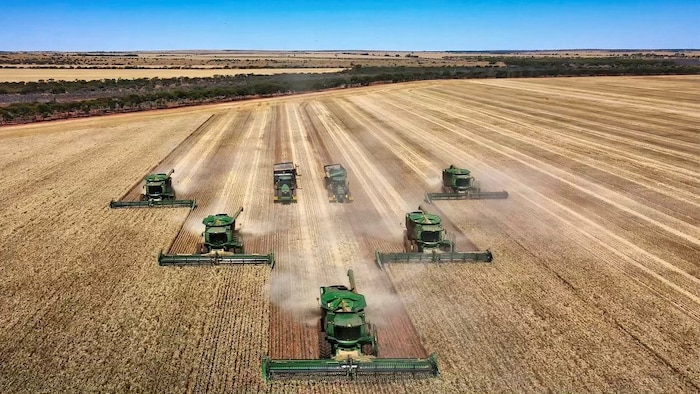 Source: ABC
The West Australian grain production industry is experiencing a once-in-a-generation harvest with many growers enjoying the trinity of good yields, quality and prices. A record 21 million tonnes of wheat, canola and other cereals valued at $8 billion is set to be harvested in the coming weeks.  Kulin agronomist Ben Whisson described the year as a season like no other.  "This year we have finally hit the holy grail ? fantastic yields, great grain, pricing ? everything that we would want in that regard," he said.  "I feel like I am going out on a bit of a limb here but I think it is probably a once-in-a-generation season." Two seasons in one Brothers Mark and John Flannagan farm a 26,000ha wheat and chemical fallow operation at Pindar, 140 kilometres east of Geraldton. At the halfway point of his current harvest, Mark Flannagan said this season had been one of his best ever. "It's an unbelievable season, it really is," he said. "We're sitting anywhere between 3 and 4 [tonnes per hectare]. We look at 2 tonnes as good, 2.5 is exceptional, 3 tonnes is off the scale," he said. "We've effectively had two seasons here in one, we'll be looking to push a lot of marketing through to July next year just to insulate us, these years you deliver a lot of grain, it's a lot of dollars but the COVID tax man will be out." Staggering prices received   The grain flowing into header boxes and field bins is currently worth a lot more than an average season.  Wheat is fetching cash contracts between $400 and $450 a tonne and at times this year canola has cracked the $1,000 per tonne mark ? prices close to double those offered at the same time last year.  Andrew Fowler is one of WA's most substantial broadacre farmers, cropping 34,000 hectares east of Esperance with a team of 50 staff this harvest. He took on an additional lease property at the start of the year and in order to spread his risk he locked in grain prices when they were not as high as current cash offers. "Most of us are selling our crops over an extended period of time and the average is what's important," Mr Fowler said. "Personally we did sell a reasonable amount with a six in front of it and we are going to be coming along with a very good average but it's going to be closer to 800 [dollars per tonne]. "We're probably going to need all of that to get ourselves ready for a much higher cost structure next year with the way fertiliser pricing is looking. I think we just need to get the crop off and sit down and plan carefully." Too much water and too cold for some crops  As with every season, some districts do well while others struggle.  In southern parts of the state, the season has delivered too much rain with waterlogging affecting 10 per cent of crops in the Albany zone.  At Green Range, 70km north-east of Albany, mixed farmer Jeremy Walker's crops have drowned in too much standing water.  He has decided to make the most of the problem, installing a centre pivot irrigation system to grow fodder for livestock next year.  "I'm trying to find a way for water to make me happy rather than sad," Mr Walker said. "We've already planned to drop the cropping percentage by a fair bit. The sheep are that safety net for us." Frosts have also taken a toll on some individual farmers with yield losses of up to 50 per cent or more of what it could have been. Andrew Dunne farms at Beacon, just over 300km north-east of Perth. He had some frost at his place and so did his brother. "Some of his crops that were going to be his best ever and overnight a couple of hours of cold weather has changed his whole year," Mr Dunne said.  Eye-watering prices to be paid Attention has already turned to next season, which is likely to be characterised by record-high input costs, particularly with skyrocketing fertiliser and chemical prices. Farmers such as David Eliott from Watheroo in the Wheatbelt have baulked at paying twice the usual price for fertiliser. He expected to reduce next year's seeding program in favour of more sheep.  "Some of the input prices are making us a little reticent to commit to a huge year," Mr Eliott said.   "We have got the flexibility to increase the livestock a little bit on the home farm and that is the option we decided to go down."