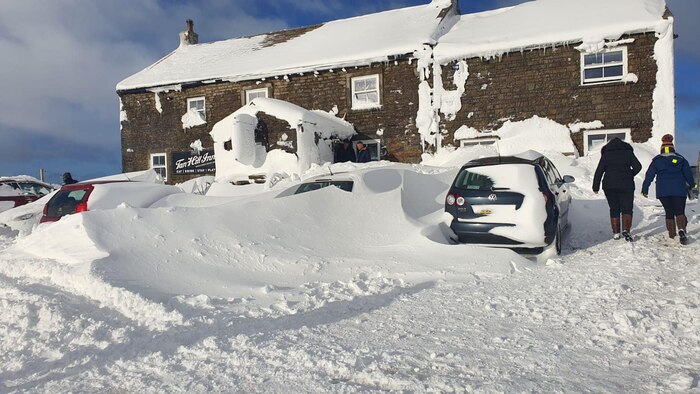 Source: ABC
For three days dozens of Oasis fans found themselves caught beneath the snow inside a 17th century British pub, after turning up for a tribute concert. They had come to The Tan Hill Inn, the highest pub in the United Kingdom, to see the tribute band Noasis. As the show kicked off on Friday night, the snow was already coming in thick and fast from the oncoming Storm Arwen. By the time the lights came up, the snowdrift had shut them in. "Anyone got a shovel!" the venue said on Facebook. Cars in the parking lot were trapped but, even if they could get into the driver's seat, police had closed all the roads. Arwen is the worst storm to hit the UK in 60 years, business secretary Kwasi Kwarteng said. Tens of thousands of people lost power over the weekend as gusts of up to 160kph swept across the country. Back at the inn, staff found sleeping spots for all 61 people and the few dogs that were caught up in the lock-in. Those who were meant to be in tents outside ended up on the floor of the pub. "We always find a bed somewhere, somehow when snowed in," the inn said. Tan Hill Inn is not unfamiliar to being snowed in at its high-altitude location in Yorkshire, which is closer to the Scottish border than to London. It even re-enacted a similar scenario for a Christmas ad for British supermarket Waitrose back in 2017. With a well-stocked kitchen and bar, they were prepared to wait it out until the snowplough arrived in the morning. But, in the light of day, it was clear they might be waiting a little longer. A live power line had come down over the only safe road to the inn, and their own plough was itself stuck under the snow. The plough that was meant to come from nearby had reportedly run off the road and had to be pulled back on by a tractor. Staff kept the guests entertained with karaoke, board games, quizzes and the on-tap entertainment of Noasis for two more nights. Soon news of the Oasis fans locked-in by the snow storm was picked up by the local paper. From there it spread to the national British newspapers and TV shows, to news outlets in Europe, China, Argentina, Canada, the United States, New Zealand and Australia. Landlady Nicola Townsend was in hot demand for interviews, speaking to the media as she sat in front of the pub's fireplace with the locked-in patrons. "It's been really quite a positive thing to come out of this storm," she told ITV's This Morning. "People have come here as strangers on Friday night, and on Monday they're leaving as friends". The inn said the departing guests had been "perfect", helping staff clean and doing a whiparound of cash to thank them for the largely free accommodation and food. "We will ALWAYS remember this group of amazing people who came together, and hopefully, in challenging circumstances, enjoyed what we all think was a life-changing experience," the inn said on Facebook. Noasis has embraced its new nickname "Snowasis", and even got a mention in music magazine The Rolling Stone for their part in the story. Oasis frontman Liam Gallagher, when asked what message he had for the band Noasis, tweeted: "I'm actually jealous. I'm always trying to get a lock inn". Three people were evacuated during the lock-in: A couple were taken to get home to their three-month-old baby, and mountain rescuers assisted a man who needed medical treatment. The final two guests left on Monday when the roads were clear. On Facebook, the inn said that there was rumoured interest in making a movie about the event but, at the very least, they would be organising a reunion for next year.