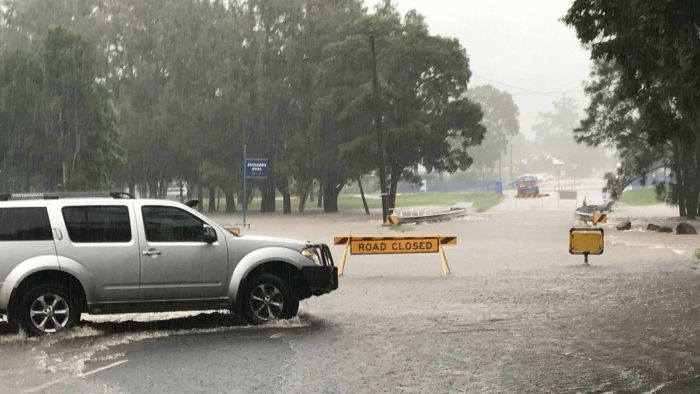 Source: ABC licensed
Tens of thousands of people have been ordered to evacuate areas of northern NSW, with the SES warning of "unprecedented" flooding in the region, including in the city of Lismore and around Murwillumbah and Tweed Heads. "At the moment there are about 40,000 people subject to an evacuation order across about 18,000 properties, mainly on the Tweed River but also on the Wilsons River at Lismore," Acting Deputy Commissioner Mark Morrow told the ABC. The SES has ordered residents of Lismore CBD, North and South Lismore to leave immediately after the weather bureau advised overnight rain would push Wilsons River to 11 metres by Friday morning. At least 45 flood rescues have already taken place around the Lismore area. "The Wilson's River is our biggest concern, that's risen so quickly we've gone straight to an evacuation order for about 6,000 residents [at Lismore]," Mr Morrow said. "It's very dangerous conditions out there over the next 24 hours." "Do not delay your evacuation. Roads will be congested or closed. You could become trapped and need rescue," an SES warning said. There have also been serious concerns the Richmond River at Lismore could breach the levy wall built around the town. People who need assistance are advised to go to an evacuation centre at Southern Cross University on Military Road in East Lismore. Lismore has a population of more than 25,000. 'We're all nervous' The SES has urged people subject to evacuation orders to leave early and make their way to local evacuation centres if they are not able to reach other family or friends. Local resident Donna Walker said she made her way to the evacuation centre at the Southern Cross University after she and her children were forced to leave their home at North Lismore. "We're all nervous, we're all upset ... we're all not knowing where we're going," she said. "[We don't know] what we're doing next, or what's going to happen to our belongings." Ms Walker said and her family were trying to make the best of a stressful situation. "It's a bonding time ... I think there's a bit of bonding," she said. "So, I said to the kids, we're all in the same situation, so you know take it easy on each other, so there's no fighting and things like that." Gale force winds likely for Friday Earlier, the SES issued a flood evacuation order urging residents within the South Murwillumbah, Condong and Tumbulgum areas to leave as soon as they could. "Wherever possible, people should go and stay with family or friends or make other accommodation arrangements," the SES said. Becky Gollings from the NSW SES said an evacuation centre had been established at the Murwillumbah Sacred Heart Church Hall. There is also an emergency evacuation order for residents of Chinderah, Tweed Heads South and West, Kingscliff, Fingal Head and Bilambil. as the storm that was Cyclone Debbie continues along the east coast of Australia. The SES said the full extent of flooding in the area would not be known for some time, with heavy rainfall expected to continue. "Of course it's going to take some time to move down the river system and the consequences of that are going to become obvious possibly tonight," Mr Morrow from the SES said. "The other part of that is the wind associated with the back end of the cyclone in Queensland." Gale force winds are likely to pick up early tomorrow morning, the SES has also warned. Lismore flooding 'worse than 2001 and 2005' The weather bureau issued a major flood warning for the Wilsons River at Lismore for Thursday night. River levels are predicted to be higher than 2001 and 2005 floods, BOM said. Many of the main streets of Lismore are under water. Lismore Council's emergency management officer Scott Turner said the levy gates had been closed. "We've closed all of the flood gates on the creeks et cetera and the stormwater drains that run into [the] river so our pump stations are now pumping that water that's falling and that would normally drain directly into the river and having to pump that over the levy and into the river." 'Leave early' The SES urged people in affected areas not to wait for evacuation orders, but to make a decision to leave early. "You don't need to wait for an evacuation order," Mr Morrow said "Secure your property and then you can do it in your own time, as opposed to a short time if we're forced to issue an evacuation order with short turnaround. "Go to a family or friend's place." Mr Morrow warned there was more rain expected overnight. Mr Morrow urged residents to keep up-to-date with changing weather conditions, particularly rising river levels around the Tweed River down to Chinderah. "Watch the news, listen to the radio, check our website, use any source you can to inform yourself."