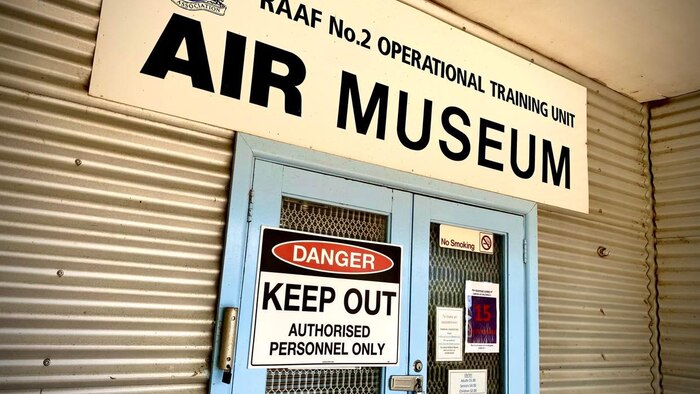 Source: ABC
Mildura played a vital role in World War II as home to Australia's largest fighter pilot training base but volunteers are worried the memory of this precious history is under threat, after a wartime museum was deemed uninhabitable. The Mildura RAAF Military Museum is home to hundreds of precious photos and artefacts depicting the heroic and heartbreaking stories of the pilots and flight crews who trained at the No.2 Operational Training Unit (2OTU). The 80-year-old building was where 1,247 Australian Air Force (RAAF) fighter pilots were trained before being deployed over the skies of the Pacific and European theatres of war. Paul Mensch, Mildura RSL sub-branch president, said the building needed restumping and reroofing. He said the feasibility of the repair ? or relocation ? is being investigated by the building's owner, the Mildura Airport. "We are working with the Mildura Airport to relocate the entire collection to a temporary building until a more permanent arrangement is confirmed," Mr Mensch said. "The building itself has been there for 80 years ? and it was only built to last five years, so it's done well to last the past 80," Mr Mensch said. Mildura 2OTU RAAF Museum volunteer Paul Nicholias is worried the old building may not cope after a series of severe storms passed through the region this week. "I'm worried the heavy rain is going to leak through the old roof and the ceiling might fall in, destroying photos and glass display cabinets. "These collections are irreplaceable," Mr Nicholias said. The Mildura No.2 Operational Training Unit (2OTU) played a critical role in training RAAF fighter pilots, but it was not without the loss of 52 aircrew and seven ground crew, whose dreams of fighting for our nation in the RAAF were cut short when their aircraft crashed in fields and towns surrounding Mildura. Sadly, of the 1,247 fighter pilots trained at 2OTU, 288 pilots and aircrew lost their lives fighting in conflicts around the world. The museum's extensive collection of photos, memorabilia and artefacts are a tribute to the RAAF men, and Women's Auxiliary Australian Air Force (WAAAF) members, providing an insight into the realities of war. War collection on the move Anthony Koch from 2OTU Heritage Mildura has high hopes for a bigger museum space that could also house a display of restored WWII aircraft, including a Kitty Hawk the group has been restoring for many years. Both Mr Mensch and Mr Koch agree that the historic WWII Bellman Hanger, currently the airport's long-term car park, would be perfect as a permanent home for Mildura's RAAF Museum. "The Bellman Hanger would be able to house the RAAF Museum collection and also provide space for a World War II aircraft display," Mr Koch said. It'd hoped the collection will be back on display in time for Anzac Day.