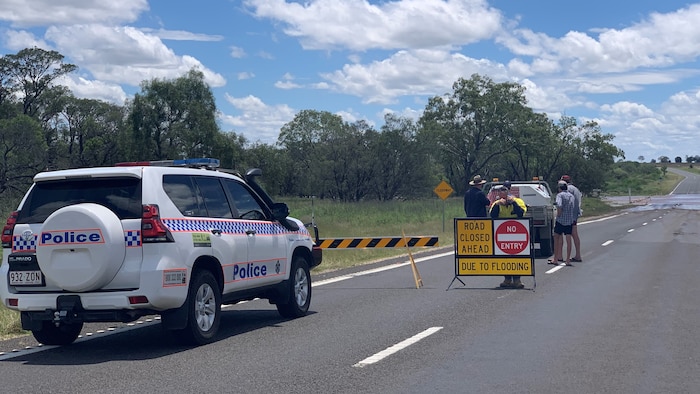 Source: ABC
A man has died in Central Queensland floodwaters after his ute was washed off the Gregory Highway. A member of the public discovered the car north of Emerald just after 7:00am and alerted police. Officers and emergency services are working to retrieve the ute but officials said the recovery may take some time due to the location and poor weather. "The male driver and sole occupant of the vehicle has been located deceased," a spokesperson said in a statement. The Forensic Crash Unit will investigate the circumstances surrounding the incident. The region has received significant falls, with flash flooding overnight. Up to 270 millimetres have been recorded in the past 48 hours, with the catchment receiving an average 150 millimetres. 'Stop, take all the time in the world' Central Highlands Mayor Kerry Hayes said he had little detail about what happened but that the man's death was "very sad" and "tragic". "When you have disaster management people literally watching over so many things, it always comes as a big shock when we hear that there's actually someone travelling on the roads and unaccounted-for," he said. He urged residents to stay put and avoid driving through floodwater. "The rule here is don't assume anything," he said. "If it looks like it's six inches deep, it's probably more. "Stop, take all the time in the world to stay on the high, dry side. "No-one is getting into strife for staying back and not risking their lives." Flash flooding hit Rubyvale and nearby Sapphire. Local Disaster Management coordinator Glenn Bell said some people left the area during the night. "At those heights, certainly a lot were prepared to," he said. "There would be a few in the Rubyvale area that would've evacuated, and we're just working through that now. "