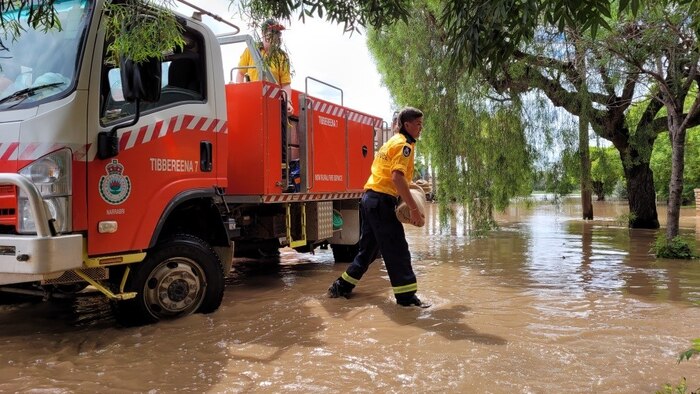 Source: ABC
Homeowners in northern New South Wales have had a lucky break from floodwaters with no reports of major damage. More than 280 residents have returned home to Boggabilla after the town was issued an evacuation order on Friday. Toomelah residents remain evacuated, likely to be declared all clear later today. SES spokesperson Paul McQueen says despite Toomelah being isolated, crews have had minimal job calls.  "It means they've heeded the warnings, they're prepared and moved to higher ground. It's great to see," he said. The McIntyre River at Boggabilla peaked on Saturday at 12.39 metres. Despite the major flood level, homes have escaped the mud many locals were dreading.  "We've had rapid damage-assessment crews going from property-to-property and looking by air," Mr McQueen said. "People's yards are bogged, but we haven't seen over-floor flooding in homes apart from a few out-houses." The Bureau of Meteorology has predicted up to 50 millimetres of rain along the Queensland and New South Wales border near towns like Goondiwindi and Boggabilla.  "Although that rain is predicted to raise those river levels we aren't expecting it to get to the peak we've seen," Mr McQueen said. "It won't trigger renewed evacuation warnings for the community, so that's good news. "December's looking to be a damp month. The community should keep on their toes." Crop losses Broadacre farmer Pete Mailer in Boggabilla had only five per cent of his crop left for harvest.  Although he has counted this season as his most successful, with high yields, the weekend's flood has already cost him. Crop damage is yet to be assessed for the north-west region, but Mr Mailer has totalled more than $250,000 lost. "It's the biggest flood we've seen at the house. Although, certainly, the river peak wasn't a record or anything," he said.  "This is actually the second flood we've had for harvest. And what we didn't get off is basically a write-off." Mr Mailer said that many producers in the region were not strangers to wet conditions, farming on a floodplain. But the timing has caused a lot of anxiety.  "Some people are still a long way from harvesting," he said.  "We're all very aware that this has been a really serious event with significant to even catastrophic crop losses." Nevertheless, he remained optimistic for next year.  "In the longer term, on the back of the flood the ground is primed and ready to go for the next crop," Mr Mailer said. "I sometimes feel that floods are better than drought."