The remnants of Tropical Cyclone Tiffany will cause heavy rain, thunderstorms and thick clouds to spread across central and south-eastern Australia during the next week.

Tropical Cyclone Tiffany made landfall over the NT’s eastern Top End as a category one cyclone on Wednesday.

Since then, the system has weakened to a Tropical Low and caused heavy rain to spread across Top End and into WA’s Kimberley district. During the 72 hours to 9am on Friday, falls of around 100-200mm were recorded across th is region. 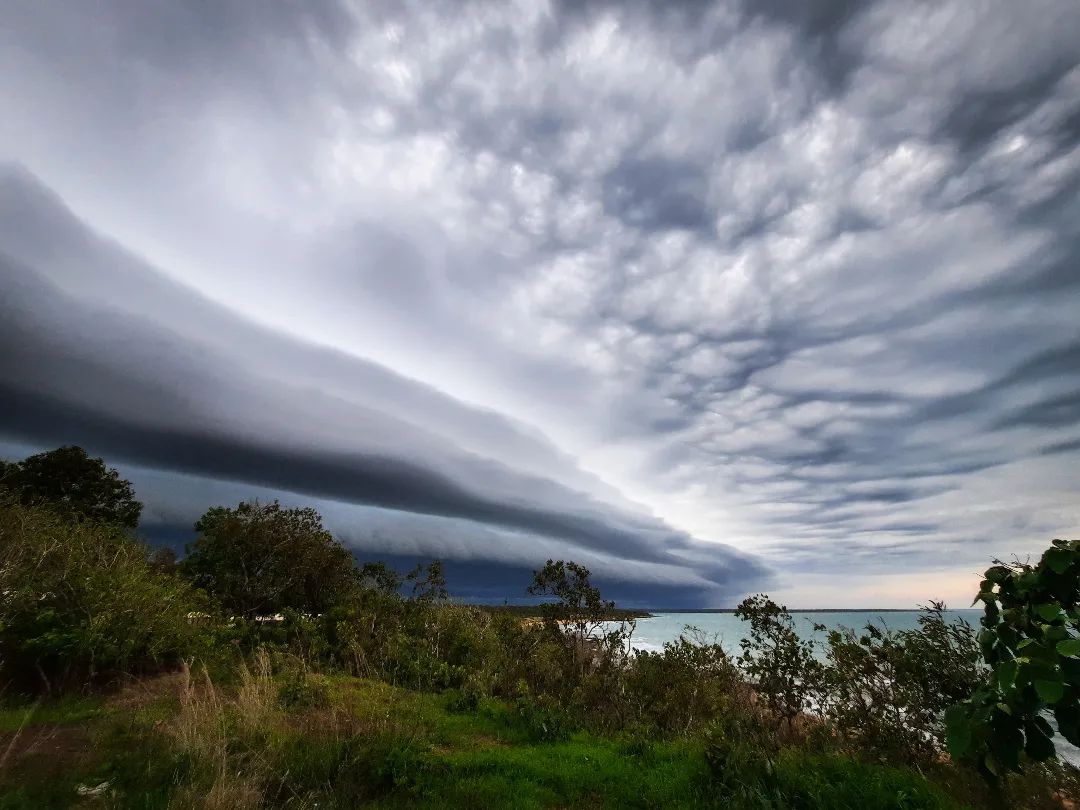 Wadeye (Port Keats) received 107mm during the 24 hours to 9am, bringing its two-day total up to 153.2mm. This is more than one quarter of their average monthly rainfall at this time of year. Further east, a rain gauge near Katherine picked up 200mm of rain during the three days ending at 9am on Friday. 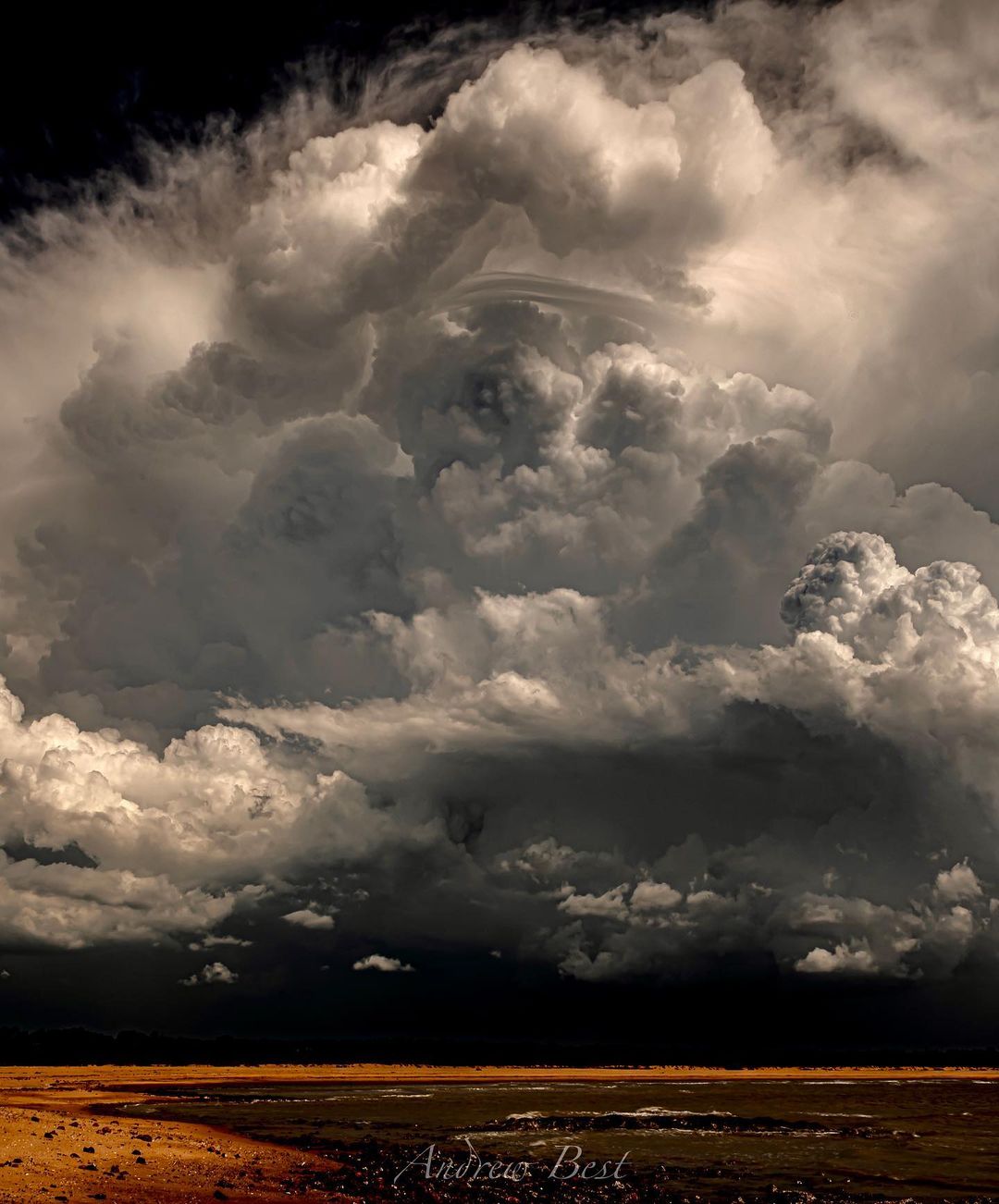 Image: A thunderstorm towers over Dundee Beach in the NT. Source: @thegoldensnapper / Instagram.

In WA, falls of around 70 to 100mm were observed near and south of Kununurra in the 24 to 9am Friday.

On Friday morning, ex-Tropical Cyclone Tiffany was located over WA’s Kimberley district, where it was continuing to produce heavy rain and thunderstorms. 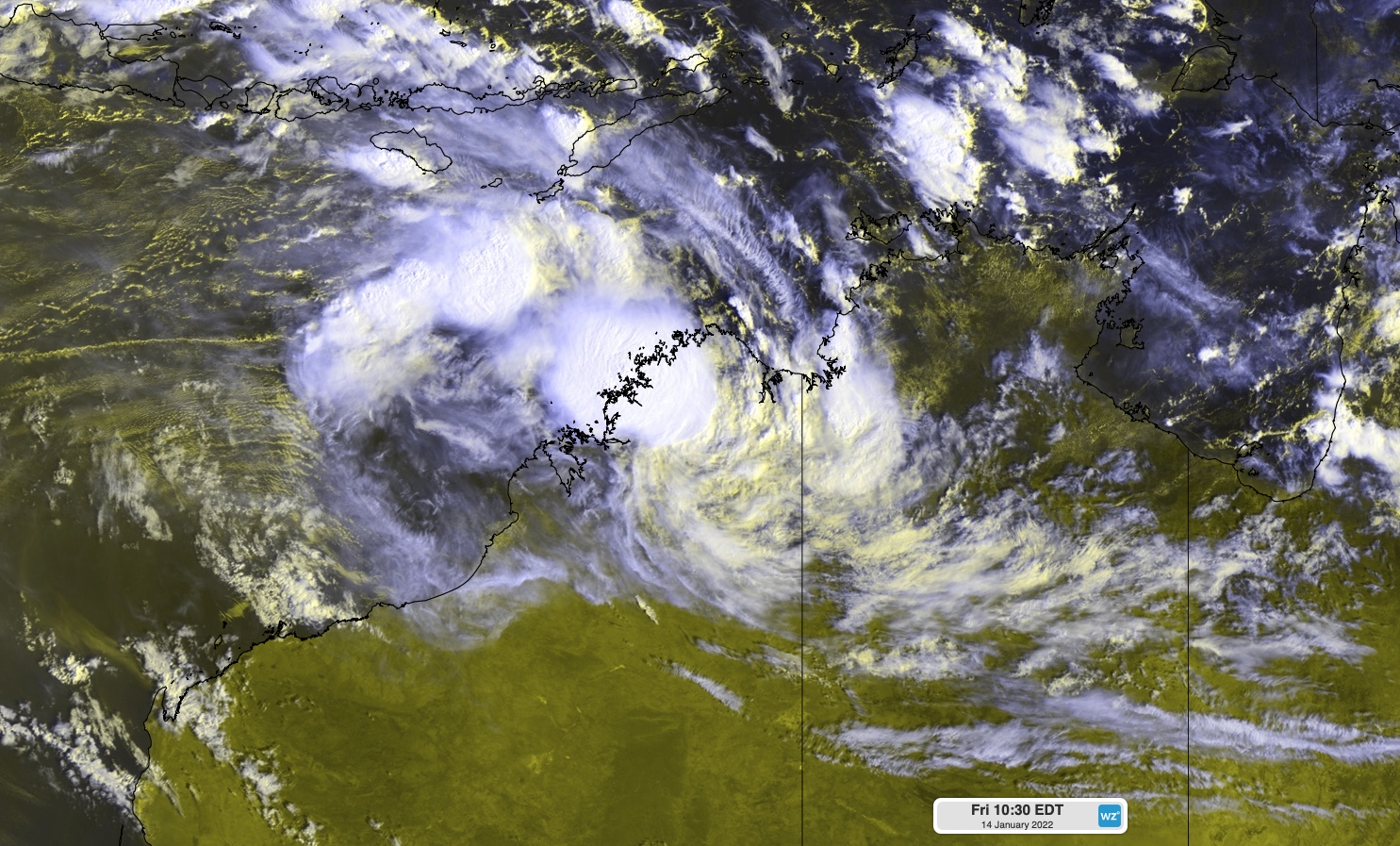 There is now good agreement between forecast models that the remnants of Tropical Cyclone Tiffany will move south in the next few days.

This will drag tropical moisture across a large area of central, southern and eastern Australia between now and the end of next week, where it will produce widespread cloud, rain and thunderstorms.

Video: Forecast precipitable water from the ECMWF-HRES model, showing mositure-laden air spreading over southern and eastern Australia during the next week.

The southward-moving tropical air will also erode a hot air mass that is currently sitting over central Australia. This is likely to help suppress temperatures in parts of southern and eastern Australia next week.

Video: Forecast 850 hPa temperature from the ECMWF-HRES model, showing hot air in central and eastern Australia being broken down by increasing cloud cover in the coming week.

Between Friday and Sunday, rain will spread south from the Kimberley and affect the North Interior of WA and the NT’s western inland.

As you can see on the map below, daily rainfall totals of 100-150mm are forecast across this region, with isolated falls of around 300mm possible in some places. 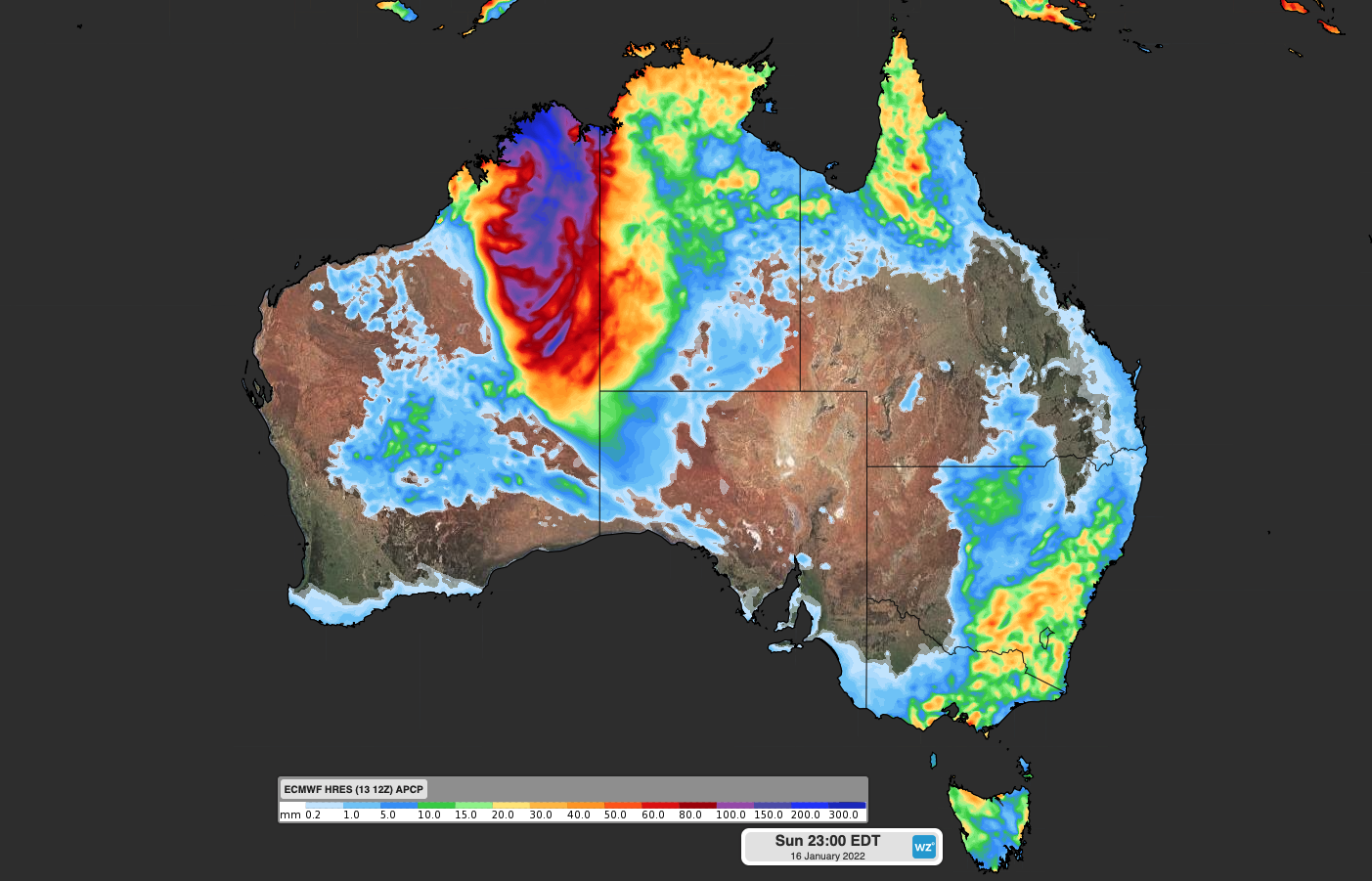 Image: Forecast accumulated rain during the 72 hours ending at 11pm AEDT on Sunday, January 16, 2022, according to the ECMEF-HRES model.

This tropical moisture is expected to continue moving south next week, where it will link up with a low pressure trough and drag copious moisture across parts of SA, NSW, VIC, the ACT and QLD.

This moisture-laden low pressure trough may become near-stationary from the middle of next week, leading to several days of cloud, rain and storms across eastern and southeastern Australia.

While there is still some uncertainty around how this system will play out as it moves south, there is a good chance that a broad area of southern, central and eastern Australia will receive heavy rain over the next week. 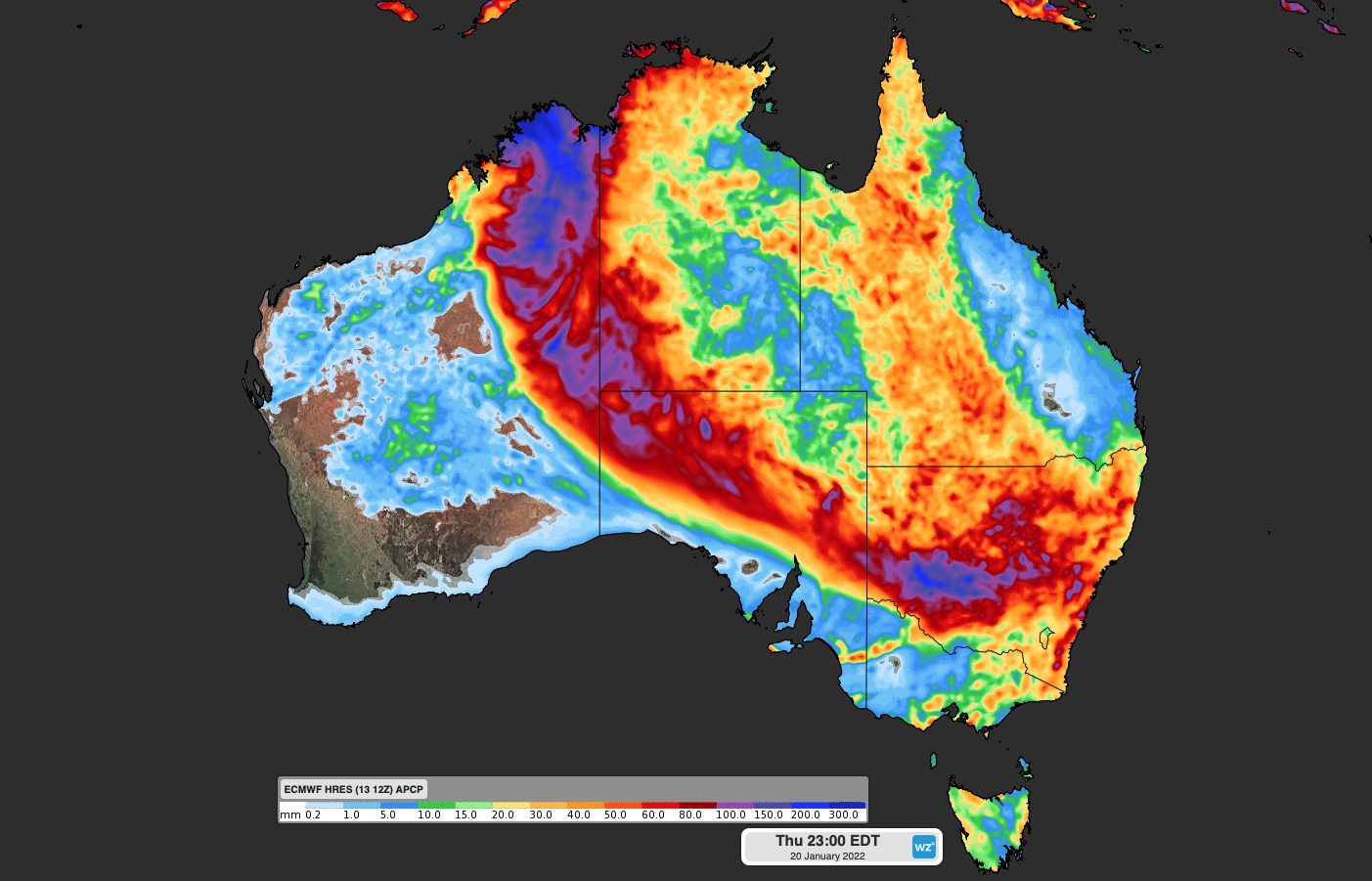 Image: Forecast accumulated rain during the next week (7 days ending on Thursday, January 20), according to the ECMWF-HRES model.

The clouds produced by this tropical airmass are also likely to reduce solar output and suppress daytime temperatures across parts of southern and southeastern Australia for several days next week.