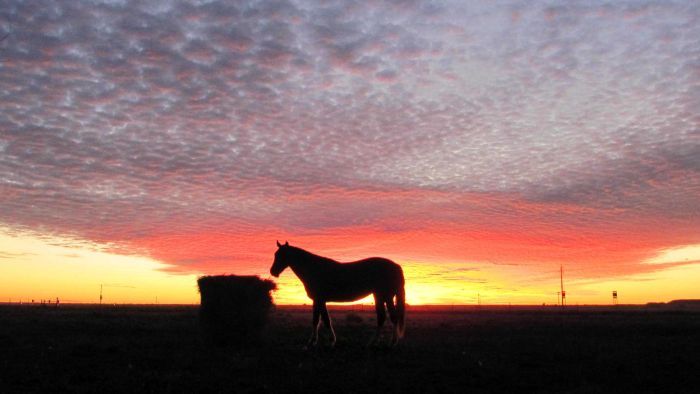 Source: Audience submitted
Experts are predicting a return to average temperatures in inland areas by the weekend, bringing relief to regions that have been sweltering in record-breaking temperatures. Extreme conditions continued yesterday, with soaring temperatures in areas extending from Queensland's interior to Central Australia and north-western New South Wales. But Graeme King, a senior forecaster with the weather bureau, says a change is on the way. "We will shift that stagnant air mass [on Thursday night and on Friday], with a change pushing through. By the weekend we will be back to average temperatures, mid-30s," he said. "It will be a welcome relief, too, after this week." On Thursday temperature records again tumbled in central, western and north-west Queensland, with the mercury topping 40 degrees Celsius in a number of areas. "Century Mine in the far north-west of the state got up to 44.6 today, Camooweal 45.5, a new January record, the Monument Airport 45.9, another January record," said the weather bureau's Peter Otto. "Bedourie police station [recorded] 47.3 [degrees], which is an annual extreme for them, and Birdsville got up to 48.6." Birdsville local Jenna Brook says the soaring temperatures can be tough going at times. "It's not pleasant to be in 45 plus degrees but we've definitely got our ways of coping with it," she said. "We've got a lovely big billabong we can go swimming in and a community pool that will be open this afternoon as well as being lucky enough to have most things air conditioned. "So we deal with it - it's part and parcel of living out here really." Northerly winds will push the heat towards the state's south-east over the next few days. Brisbane is expected to reach a high of close to 40C on Saturday. SA publican 'fried an egg on a shovel' South Australia's far north also sweltered through near-record temperatures on Thursday, as ex-tropical cyclone Christine tracked across the state, bringing high winds. John Nairn from the weather bureau says several outback towns had temperatures well into the 40s. "Our temperatures have been near record, the highest temperature we had was at Moomba at 49.3 degrees but a lot of centres up there are pushing up around that 50 mark," he said. "It is unusually hot. It's at least 15 degrees above the average up there at the moment and those are pretty unusual temperatures." Phil Turner, a publican at Marree, about 700 kilometres north of Adelaide, was making the most of the heat. "You hear stories of people frying an egg on a shovel, so we set up a shovel this morning out the front and sure enough we've got an egg there that's slowly frying away," he said. "It's probably cooking more from the sun than it is from the shovel but at least we've got some white and the yolk that's cooked. "So yep, we fried an egg on a shovel." Conditions in the state will ease significantly overnight, and ex-tropical cyclone Christine will downgrade to a trough. NT swelters as NSW warns of possible fire bans In the Northern Territory, top temperatures at Alice SpringsÂ . Tennant Creek airport on Thursday recorded its highest-ever temperature of 45.4. Despite a predicted cool change, today's forecast top temperature in the town is 41. The previous record of 44.2 was set on January 25 last year. Meanwhile, temperatures were also high in New South Wales, with Bourke and Tibooburra in the far north west reaching 44.9 degrees and 45.6 degrees respectively. The Rural Fire Service says Friday will also be a trying day, and it is not ruling out introducing total fire bans across the state. "We may see some areas go to extreme and that's likely to bring forward total fire bans in those areas," said Joel Kursawe from the RFS.