Hailstones sounded like 'herd of elephants' on historic Victorian winery 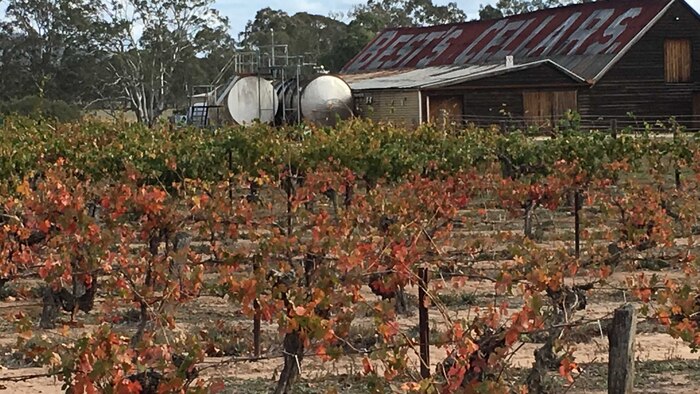 Source: ABC
A short, destructive hailstorm overnight in the Wimmera town of Great Western, Victoria "sounded like a herd of elephants was jumping on the roof". Great Western pub owner Bruce Ah Chow said the brief but damaging hail storm startled him and the pub's customers, who were sent running for cover at 9pm last night. "I had come back from Ararat and played tennis, beautiful day in Ararat, as I drove closer to Great Western, around Armstrong, you could see the storm clouds brewing," Mr Ah Chow said. "[I] got back to Great Western about nine, and ? it just dumped on us and pommelled down with very heavy hail." "I put one [hailstone] against a bottle cap, just on the bar, and it's about two or three times the size of a stubby cap, so a bit smaller than a golf ball but certainly big enough to do some damage. "When I took the video, I was out there and they hit you and hurt pretty hard. "You can drive around town and see where the trees have been stripped, not completely stripped but they've given the trees a hammering, and there's a nice little sprinkling of leaves under most of the trees. "The pub's one of the older rooves in town so I'll have to have a good inspection of that and see how much damage was done." With a population of just 400, Great Western is home to two high-profile wineries and a winemaking history dating back 150 years. Ben Thomson manages and directs Bests Winery, and said grapevines this old were among the casualties last night. "We were having a walk, and could hear this strange noise on a roof about 500 metres away, and all of a sudden hailstones were landing around us," Mr Thomson said. "Next to the shed in our 150-year-old [vines] there has been a lot of damage. Canes are completely broken halfway up. Our old Thomson [vineyard] I'd say we've lost 70 per cent of." "We are a bit worried about cane worms and broken bits and pieces allowing disease or mould to get in. We'll put a protectant spray to protect what we've got left now. "It's gone through our laser lights in the cellar door, but I think it was just a quite narrow strip [affected]." Mr Thomson said the grapes were at the flowering stage, a critical time of year. "The season was looking quite good, crops will be down a bit on last year but still reasonable crops. We've dodged most of the bad weather except for last night," he said. Although the vineyard called Great Western was hit by hail, the other two vineyards were not. "You think you're sitting pretty then something else comes along and gives you a bit of a surprise. It's pretty devastating, but you just grin and bear it and keep going."