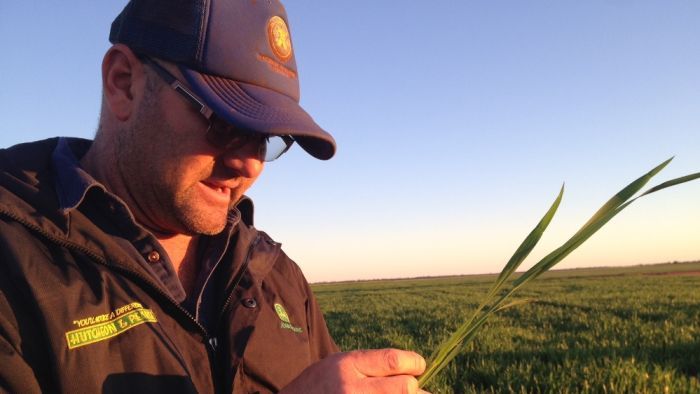 Image: ABC Rural. Source: ABC
Grain growers in the central and western plains of New South Wales are finding widespread damage to their wheat crops after a dozen severe winter frosts. Canola is being cut to hay or silage, and some farmers are saying up to 80 per cent of their wheat crop could be a write-off. Jock Coupland, who has a combined dry land and irrigated farm on the banks of the Lachlan River, 40 kilometres west of Condobolin. The former agronomist has 3000 acres of wheat and 1500 of canola and grows irrigated cotton. Standing in a field of wheat, he says that stem frosting is widespread in his wheat crops. "There's some distinct things going on here. "We've got these new tillers that are coming from the base of the plant and they're a bit odd, they actually come in on the plant just beside the main stem inside the leaf sheath. "They're re-tillering, when you pull that apart, you can see the bottom node, the stem itself has been completely frosted, so that's starving the main stem for moisture. "That's a big concern, and it seems to be irrespective of sowing date. He says that his frost-affected canola has compensated since good rain in early August. "Before the rain it was kind of running out of moisture and I reckon the crop was pretty much a write-off, but since the rain, we had 32 mm of rain on it, it's been flowering for a fortnight now, so I am thinking that the damage level is probably 50 per cent of the crop," he says. Condobolin farmer Roger Todd says the financial cost will be big as they doubled their crop this year because of the early autumn break. "I'm guessing half our wheat, by the looks of things, is almost fully wiped out. "I mean minus five, minus six and all night, frozen for ten or twelve hours, it's like putting a plant in a freezer all night and trying to thaw it out the next day and see if it will keep growing. "Given that we had a full profile, we thought, right, let's double up and try and make some money while it's raining. "The frost put an end to that," he said. The most damaging frosts occurred in late July. While many farmers sowed early in the region, Mr Todd's wheat was sown between the 5th and the 7th of May. But he says that, even with a late sowing date, it would have been almost impossible to escape damage in these frosts. Cutting open a stem, Mr Todd says the frost has stunted the growth of the wheat. "We've got a full tiller here with the flag leaf emerging and on track looking fine, but then you go and cut that stem open and, between the first and second node, the head has stalled and it's only about 30 millimetres long. "Normally that head would be out over the next two weeks, so somewhere along the line it's been frozen and it's just stopped developing," he said. Mr Todd estimates his wheat crop would have yielded one tonne to the acre or 2.5 tonnes to the hectare. He says that there's no real way for him to recover costs. "For us, there's no real way of recouping any of this wheat down here. We can't graze it because we've got no fences down here because it's our continuous cropping country. "I've been told that hay is a no-go...I've been told that you need to get that head to get out of the boot, otherwise it won't cure. "Silage, that's no good for us because we don't own livestock. "There's really no options for us, except maybe a brown manure, spray it out," he said. Mr Todd says that canola crops in the region were also hit hard, with one neighbour cutting 250 acres to hay. Further east, the frost damage isn't as widespread, but one grain grower just north of Parkes, has a faba bean crop that's been hit hard. Mark Swift, from Tichborne, says that the morning after a minus four degree all night frost in late July, he woke up to find his faba beans had halved in size. 'We had a crop of faba beans that were about 60 centimetres and were just starting to flower, they had minus four on them, the next day they were 30 centimetres high. "We've now had ten or twelve days of warm weather, they're starting to bend around and there'll be something there. "They'll be exposed to more disease risks and they'll be harder to harvest, but we may get away with that one. Rohan Brill, research agronomist from DPI says the last thing people want to see is more frosts in September, but that is the window when frosts are most prevalent. "Frosts have hit grain growers in the central and western plains areas of New South Wales hard." But he said "the western Riverina and Riverina districts have also been hit hard as well". "The toll is still unknown, to some extent, but some crops may have suffered frost damage of up to 80 per cent," he said. "If we get some rain that will help, and in the last ten weeks in the Riverina we have seen virtually no useful rain. "Most crops in this region, and for that matter, the state could really use a drink."
Note to media: You are welcome to republish text from the above news article as direct quotes from Weatherzone. When doing so, please reference www.weatherzone.com.au in the credit.