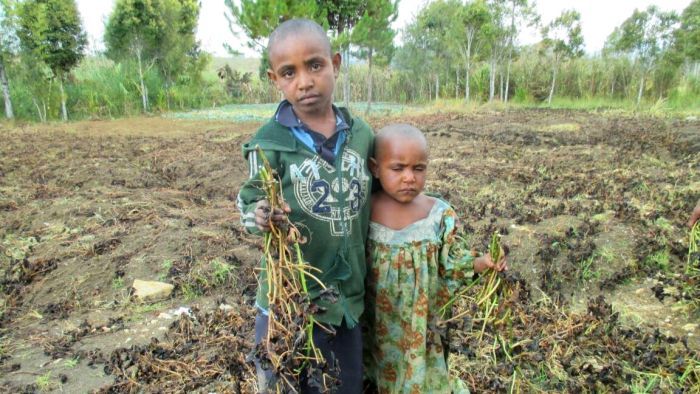 Source: ABC licensed
El Nino-driven drought and frosts in the normally tropical highlands in Papua New Guinea and Solomon Islands has brought Tasmania-like weather to the region, a regional administrator said. Enga province administrator Samson Amean called a meeting with a PNG provincial disaster and emergency committee on Monday after hundreds of villages were found to face months without food from local gardens after being destroyed by frosts. "The temperature in Wabag in Enga province is about 17 degrees Celsius, but the wind is similar to that I've felt in Hobart," Dr Amean told Pacific Beat. He said . "There has been a major disaster, all the food gardens lost in affected areas," he said. "Our basic food being sweet potato, or tuber, and all the vines are destroyed. "Vegetables in the higher altitudes like cabbage, lettuce, English potato, all that is gone." The governor of neighbouring Southern Highlands province, William Powi, has also declared a state of emergency. With most of the highlands at about 2,000 metres above sea level, Dr Amean said people have started moving to the lower altitudes where they have relatives. In East New Britain province, drought has led to more reliable water sources drying up and at the nearby Sinivit, or Wild Dog, mine site. "On the fourth month of dry spell here people have no choice but to go back to the Warongoi River," said Blaise Magaga from the East New Britain provincial government. There had been sightings of dead fish in the river, and people had reportedly fallen sick after eating them. "We have to advise them to boil the water and for drinking, use the creeks that are not from the main river, from the Wild Dog mine. "But for most of those in the upper areas, the creeks dry up." Papua New Guinea's government has promised immediate disaster funds for regions hit by drought and severe frost. The chief secretary to government, Manasupe Zurenuoc, made the promise after receiving even more reports on the drought affecting Mt Wilhelm, Chimbu province, and the frost disaster in Tambul-Neblyer in Western Highlands province. "I've never seen anything like it here in the highlands," said Blossum Gilmour, assistant country director of CARE International in PNG. "But we know the same thing happened during the last devastating El Nino experience in 1997. "PNG is especially vulnerable given that around 80 per cent of food consumed in the country is grown in this region." Neighbouring Solomon Islands under water pressure Officials in Solomon Islands are calling for water rationing as drought conditions prevail there, especially in the northern provinces. In Western Province and its capital Gizo, people are queuing until the early hours of the morning to get water. The premier of Western Province, George Solingi Lilo, said "Schools would looking to the possibility of suspension for a while because even water for cooking is a problem, drinking water is a problem, people are even rationing mineral water in shops," he told Pacific Beat. Mr Lilo said water infrastructure and aging pipes that sees the loss of up to 60 per cent of its flows is a major contributor to the city's problems. He has called upon the national government to bring long-promised infrastructure renewal back into the frame, as its delisting as a priority has seen an escalation of the drought's effects. Local media said a meeting had taken place between the Western provincial government and disaster stakeholders to address the situation this week. Ongoing El Nino conditions assured The dry, cold conditions affecting hundreds of thousands of people in large areas of PNG and Solomon Islands will continue throughout this year's El Nino event, said the director of PNG's National Weather Service, Sam Mahia. "There will be impacts in the rural areas where 85 per cent of Papua New Guinea's population resides," he said. Mr Mahia said that and has put to rest any suggestion that this year's warnings were a repeat of last year's false alarm. The deputy director of the National Oceanic Atmospheric Administration's Climate Prediction Centre in Washington DC, Mike Halpert, said this year's event could even be one of the large impact events that roll around every 15 years or so. "What we can say with confidence is that we have a strengthening El Nino, it's going to continue for the next couple of months," he said. The full forecast released by NOAA's Climate Prediction Centre last week called this year's event "significant and staggering". The effects could rival the 1997 event which saw devastating weather crises strike countries across the globe including mudslides and droughts in Indonesia, fires across Australia, flooding across the US, and was blamed for virus break outs throughout Africa.
Note to media: You are welcome to republish text from the above news article as direct quotes from Weatherzone. When doing so, please reference www.weatherzone.com.au in the credit.