Home > Weather News > Europe has had a cold and wet spring - but will it last through summer?
Niko Wanders, Assistant Professor, Hydrological Extremes, Utrecht University; , 21 May 2021, 5:32 AM UTC

Europe has had a cold and wet spring - but will it last through summer? 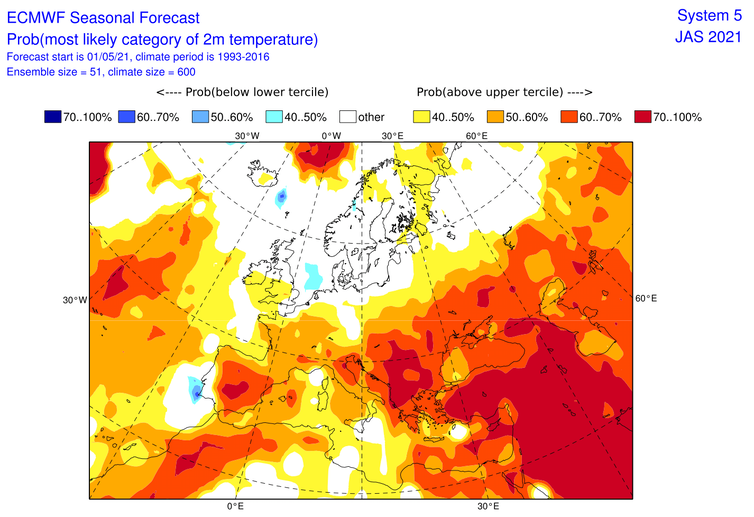 Image: theconversation. Source: Licensed as Creative Commons - attribution, no derivatives.
Spring has not yet arrived in much of western Europe. It has been particularly miserable in Britain, which recorded the coldest April in a century and is experiencing an unusually wet May . In the Netherlands, where I live, rain has been pouring down for weeks. We also had the coldest April in decades, which included more snow than any year since 1977. Most of western Europe has suffered a cold streak with the sun hiding behind thunderclouds and hailstorms . So will it get any better or is the summer of 2021 doomed? The best models we have can only predict the weather accurately up to two weeks in advance. The further ahead we go, the more unreliable these forecasts get, and the more uncertain these predictions become. That said, the European Centre for Medium-Range Weather Forecasts makes weather forecasts that go out for more than half a year. Surely we cannot trust weather forecast for six months ahead, right? This is not entirely true - while you shouldn't base your bike rides and hiking adventures on these forecasts, we can definitely use them to do some long-term planning. For example, water managers can plan their operations based on the long-term estimates of precipitation and temperature to anticipate upcoming droughts, and farmers can adjust their crops to the most likely summer conditions. These seasonal forecasts can give us information on whether a season is going to be wet, dry, or "normal", as well as warm or cold compared to normal conditions. Scientists can do a pretty good job at forecasting these seasonal anomalies, but the further we go in time the more unpredictable it gets . Seasonal forecasts are not able to predict the rain on any given day some three months in advance. Unfortunately, western Europe is one of the hardest places in the world to predict long-term weather. This is because the region's weather is largely driven by erratic currents of air moving over the Atlantic and doesn't show long-term persistent patterns. As such, Europe is more difficult to predict than regions like California or South America where the weather is partly driven by anomalies in the more stable weather patterns of the Pacific Ocean. To identify the "skill" or usefulness of such a seasonal weather model, scientists look at historic predictions and compare these with the current observations. Just like I could make a prediction of the weather for next week, and next week we will check whether I was wrong or right. If we do this for a long period of time, we can see whether these models work and if they have any predictive skill. In this way, scientists have shown that seasonal weather models are poor at predicting rain , whereas the temperature predictions provide more useful information and display more forecast skill . This means that in most cases the models make the correct prediction for summer temperatures. So now the big question, what does this mean for summer 2021? The models predict normal to warm temperatures and that it will be slightly drier than usual. Southern Europe especially has a high chance of above-normal temperatures (meaning above the long-term average of 1990-2020), while Britain and northern Europe should have normal temperatures, but drier conditions. If summer is warmer than normal it won't really be thanks to the cold wet spring, since weather patterns don't persist for long enough. Instead, the forecast warm weather is part of a large trend of warmer summers and more droughts thanks to climate change. So since the world is warming, on average most forecasts will predict normal to warm summers. If you need to make an educated guess, this would be the best choice. Seasonal forecasts definitely provide an added value, if you know how to use them. But we need to be aware of their limitations and see them as a general prediction or sense of direction. We expect the summer to be normal to warm, but this is just an increased chance given the information we now have based on the current conditions and forecast - any one prediction can of course still be wrong. After all, often nothing is as unpredictable as the weather.