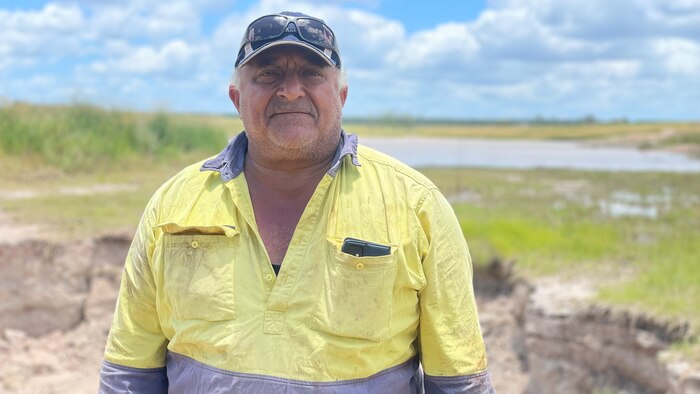 Source: ABC
Cane farmer Tony Russo stands at the bottom of an empty dam on his property near Childers, but this time it's not empty because of drought.  The dam burst its banks on Saturday after a deluge of rain from ex-tropical cyclone Seth saw more than 300 millimetres fall in a matter of hours at Farnsfield between Bundaberg and Childers. It's a tough blow for Mr Russo and his son, who built the dam after years of water insecurity. "[It's] only been completed three months ago," he said. "We made a decision because the year started off at 22 per cent water allocation, we thought that we needed it to grow our crops. "You hear it all the time, that's a farmer's lot ? we cop the good, we cop the bad. "But I guess you wouldn't be human if you didn't feel it and I feel that mentally, I feel it physically, and I feel it financially." 'We can't just sit and wait' The dam cost more than $150,000 to build and Mr Russo expected it would cost just as much to restore it. "This has really taken a lot of my money this year. I only budgeted on building the dam, but didn't budget on repairing the dam as well," he said. "[It will take] a minimum of a month and that would be to get machinery in here ? excavators, dump trucks, compactors and whatever else we've got to do to get this site back, and we've still got to wait for it to dry out." Mr Russo said he was also worried that if the region copped another deluge, it would take even longer for his dam to dry out before he could fix it ? and he'd miss out on collecting more valuable water supplies. After an unpredictable wet season, Mr Russo said he would be turning to the government for financial support.  "I've got another generation coming on and if they see me walk away, well, then they'll walk away ? we can't just sit and wait," he said. "We've got to grit our teeth, we've got to see what the government can do to help us get back on track so that we can move over this hump and get back to farming again." The federal government announced on Tuesday additional disaster assistance for the Hinkler region. "Low interest loans of up to $250,000 are available to help flood-impacted primary producers and small businesses in Bundaberg, Fraser Coast, Gympie, North Burnett and South Burnett to get back on their feet as soon as possible," Minister for Resources and Water Keith Pitt said.