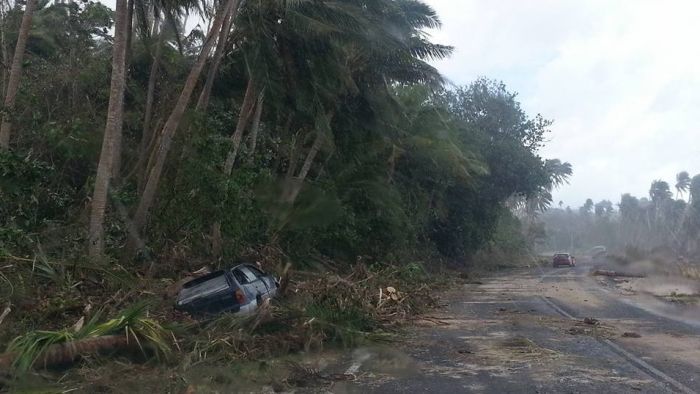 Source: ABC licensed
The death toll from Cyclone Winston, which tore through Fiji on the weekend, has risen to 21, officials say. Aid agencies warned of a widespread health crisis, particularly in low-lying areas where thousands of Fiji's 900,000 people live in tin shacks, after crops were wiped out and fresh water supplies blocked. More than 8,100 people remained hunkered down in hundreds of evacuation centres across Fiji where they had headed before Tropical Cyclone Winston hit late on Saturday with winds of up to 330 kilometres per hour. The National Disaster Management Office (NDMO) said 21 people had died and four were still missing at sea. "This number is bound to change as we progress," an NDMO spokesman said. "[In] the Western Division alone, there are 10 deaths being recorded." One of the hardest hit areas was Koro island. Residents who viewed aerial photos said the island was "unrecognisable". "We just couldn't explain how much devastation has [been] caused to the various villages across Koro," Malakai Kaitani said. Foreign Minister Julie Bishop said Australia would provide $5 million in emergency aid and offered a P-3 Orion aircraft and several rescue helicopters. "Australia's thoughts are with the people of Fiji, particularly those who have lost family and friends as a result of Tropical Cyclone Winston, the largest recorded cyclone to hit the country," she said in a statement. The UN's humanitarian agency said 150 homes were destroyed in the Eastern Division, while other reports said as many as 680 properties were destroyed in the Western Division. "There are whole villages that are just completely gone â€” there's nothing but pieces of wood left of them," UN disaster response worker Danielle Parry said. "The island of Koro in particular, in the Lomaiviti group, seems to be very, very badly hit." The Red Cross in Fiji said relief was starting to reach those affected. "The devastation is huge," Ahmad Sami from the Red Cross told Pacific Beat. "We are looking at shelter damage, restoration of water and establishing logistics so that we can ensure that beneficiaries are receiving goods and assistance. Some flights have resumed, enabling aid efforts to be stepped up as the authorities begin to grasp the scale of the disaster. Australian tourists arriving at Sydney airport said they were relieved to be home. Bainimarama calls on Fijians to band together Prime Minister Frank Bainimarama called on Fijians to band together. "This is a time of sorrow but it will also be a time of action," Mr Bainimarama said. "We will stand united in the face of this disaster. "Please, if you see your neighbour struggling, help if you are able to. "If you see a dangerous situation, report it, and keep your fellow Fijians in your prayers as we together overcome this tragedy." Mr Bainimarama ordered all public servants to report to work on Monday morning to assist with the recovery effort. The Nadi Tropical Cyclone Warning Centre said the worst of the cyclone was over and the risk of further flooding was gone. "It [the cyclone] is to the far west of Fiji," meteorologist Misaeli Funaki said. "The warning that was previously in force for literally the whole of Fiji has been cancelled. "The weather is back to normal now but unfortunately the damage on the ground is devastating." Officials said communication to some of the worst-hit areas was limited but engineers were working to re-establish phone lines, as well as electricity and water supplies. A curfew that was imposed on Saturday night was lifted on Monday morning, but schools will remain closed for the week, with buildings being used to provide temporary shelter for those who have lost their homes.
Note to media: You are welcome to republish text from the above news article as direct quotes from Weatherzone. When doing so, please reference www.weatherzone.com.au in the credit.