Cyclone Gita might have blown away Tonga's dengue mosquito outbreak 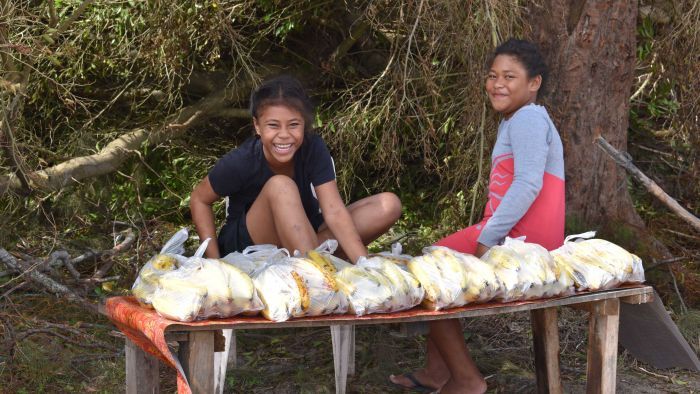 Source: ABC licensed
As tens of thousands of people on Tonga's main island struggle to rebuild after Cyclone Gita, authorities say the storm fortuitously blew away many dangerous dengue-carrying mosquitos. Two weeks after the category four cyclone scored a direct hit on the capital Nuku'alofa and the main island of Tongatapu, up to 50,000 people are still without power and a consistent supply of clean drinking water. Described as the worst storm ever experienced on Tongatapu, winds of 230 kilometres an hour destroyed or damaged at least 1,400 homes and affected 75,000 people. The electricity infrastructure was wrecked, with every second power pole down along with all the wires, meaning tens of thousands of people were left without safe drinking water because the water system relies on pumps. Although those with tanks shared their drinking water and people drank from the thousands of coconuts that fell during the storm, the head of the Tonga Water Board, Sione Finau, described it as a crisis. But now Health Ministry chief executive officer Siale 'Akau'ola said disaster authorities are slowly winning the battle to supply fresh water by treating drinking water and distributing bottled water while more power is being connected. Before Cyclone Gita, Tongan health authorities declared a dengue outbreak, with one child dying and 19 confirmed cases. Dr 'Akau'ola said since the cyclone, the number of dengue-carrying mosquitoes â€” Aedes Aegypti â€” had significantly decreased, while there was an increase in harmless Culex mosquitos that breed in swamps. "We are not quite sure, but that's what we like to think!" Dr 'Akau'ola told Pacific Beat. However, with many pools and reservoirs of stagnant water creating a breeding ground for mosquitoes, the risk of a dengue outbreak is one of several health challenges for authorities with 2,000 people still living in 30-40 evacuation centres. "We are focused on flooded areas because we know if there is going to be any vulnerability to contamination, it will be due to poor hygiene and of course flooded areas populated by people, they will be the most vulnerable," Dr 'Akau'ola said. "So we have drained some of the swamps to hopefully get rid of contamination. "It's not the perfect solution, but we're just trying to slow down the threat of contaminated water within communities." Tonga Power general manager of operations Seti Chen said it will be more than a month before electricity is fully restored. He said 25 per cent of households on Tongatapu now have power, but more than 40,000 people are still without electricity, many of them on the outer areas of the island. "That was one of the first priorities was to get the water system running in these villages so through the National Emergency Disaster Office, there's been a lot of generators distributed and they've been working at getting the water pumps up and running," Mr Chen said. "Water now is becoming more consistent compared to last week." He said linesmen were working around the clock, supplemented by 10 specialists technicians sent from Australia as part of the $3.5 million relief package.